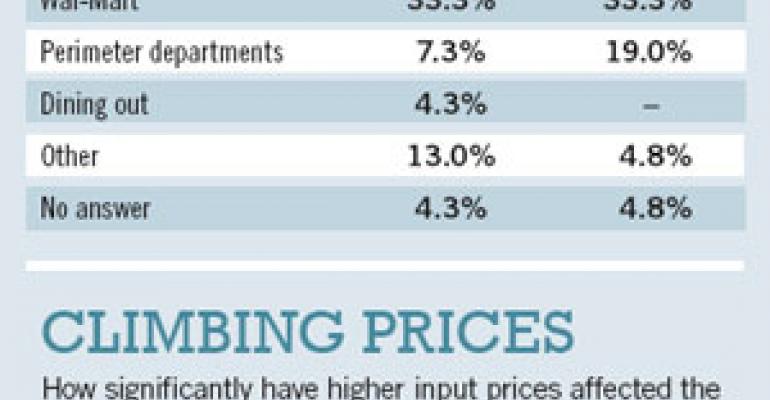 Both factors may contribute to retailers&#8217; optimistic sales projections in the face of higher

Both factors may contribute to retailers’ optimistic sales projections in the face of higher costs and strained consumer budgets.

More than one-quarter of retailers (26.1%) polled by SN expect Center Store sales to increase between 2% and 3.9% this year vs. last.

“There are so many options for the consumer, and they’re exploring all of them, particularly considering the current economic environment,” said one retailer.

“Six to eight Wal-Mart supercenters are set to open in our marketplace this year,” said another respondent. “The biggest erosion is taking place in the following departments: baby, pet food, paper, household and HBC/GM.”

Close to four in 10 manufacturers (38.1%) consider alternative channels the biggest threat to future Center Store sales, followed by Wal-Mart (33.3%), perimeter departments (19%) and other (4.8%). No manufacturer respondents chose dining out, and those who chose other also mentioned the economy and the cost of goods.

“Everybody sells beans, but the secret is in the immediate gratification of the customer,” said one respondent. “What will I offer that the store across the road doesn’t, for the same price?”