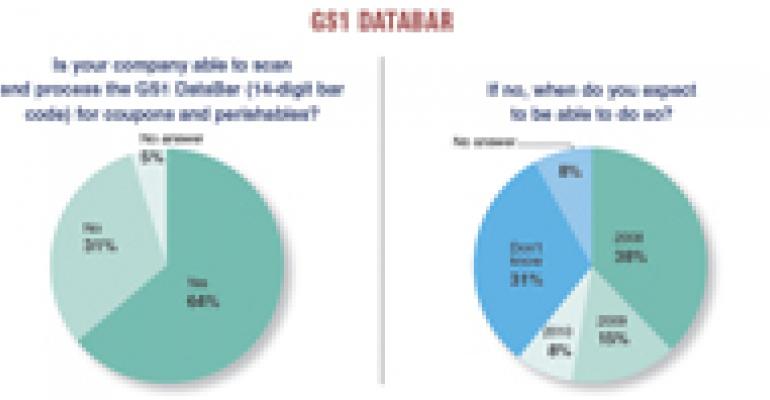 Retailers are finding many more ways to reach out to their customers through their websites and email communications. The most popular website feature is company history, employed by 70% of all respondents, followed by store locator (67%) and job openings (62%). More than half of respondents send informational email to shoppers (56%) and allow email feedback (55%).

At stores, one of the big technological changes coming soon is the GS1 DataBar, a new bar code based on a 14-digit numbering scheme, as compared with the traditional 12-digit UPC bar code. This year, the GS1 DataBar (previously called the RSS code) will begin to coexist on coupons with the current UPC code, and by 2010 the new code will stand alone. Some retailers have also begun to scan GS1 DataBar codes on loose produce. If they have not already done so, retailers will need to prepare their scanning equipment, POS software and other systems for the impending change.

Asked if their company can scan and process the GS1 DataBar, 64% of respondents said yes. Among those who said no, 39% said they would be able to do so this year, and another 23% expect to have this capability by 2010.

Surprisingly, only 42% of retail respondents (and 32% overall) said they offer card-based shopper loyalty programs, somewhat below other industry estimates. Among those offering the cards, 82% said they were using the data from the program for such purposes as target marketing and category management.

At their headquarters, retailers and wholesalers are looking for ways to manage and integrate a growing number of applications. Some are beginning to turn to service-oriented architecture (SOA), which allows systems to interact with each other while also making it easier to make changes and improvements.

Giant Eagle, for example, has applied SOA in a number of integration projects, including one that ties its workforce management system with its human resources application and data warehouse. But only 10% of respondents said they are using SOA, with 21% saying it was under consideration.

ERP solutions, which encompass a wide range of business applications from one technology provider (such as SAP, Oracle, Lawson Software or JDA Software), help to reduce the integration issues retailers face with best-of-breed systems from different vendors. ERP solutions are starting to make some headway in food retail, with companies such as Ahold and Brookshire Bros. installing them. Among survey respondents, 23% overall said they were using an ERP system, including 41% of wholesalers. Another 13% said ERP systems were under consideration.