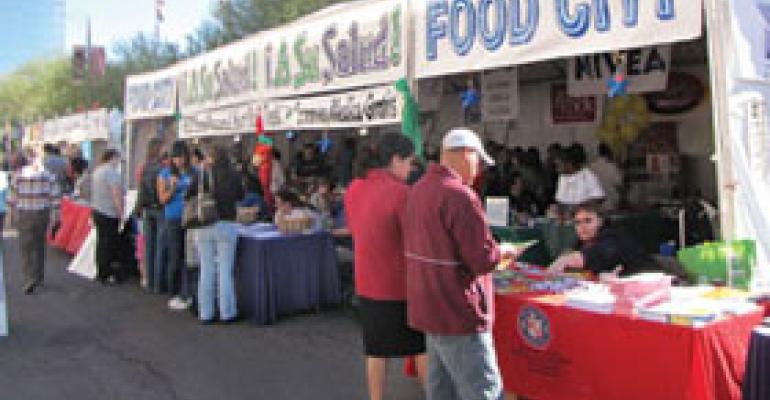 Supermarkets' commitment to wellness translates to health for Hispanics

Supermarkets love spicy food and a good fiesta, but when it comes to addressing the health needs of their Hispanic shoppers, the relationship can be a bit awkward. How do they, for instance, offer healthy tamale recipes without seeming inauthentic? How do they explain the seriousness of diabetes and obesity without putting a damper on the party?

These are questions that every retailer will have to grapple with sooner or later, if they don't already. According to the U.S. Census Bureau, Hispanics are by far the fastest-growing ethnic class in America, comprising around 20% of the overall population. Mirroring that growth are serious health concerns: 10% of Hispanics suffer from diabetes, for instance, and more than 25% are obese.

Many retailers, who already wrestle with offering health and nutrition to their mainstream customers, believe the growing Hispanic demographic requires a new gameplan. But experts caution against overthinking the issue.

“Everybody coming through the door is looking for the same thing,” said Georgia Orcutt, program manager with Oldways Preservation Trust, a Boston-based nonprofit organization that focuses on nutrition education. “They're looking for bargains, they're looking for good prices and good information. If the retailers can find ways to educate all shoppers, I think they're doing a good job.”

The first step, she said, is to not make assumptions — to understand that Hispanic consumers' biggest challenges are the same ones all consumers face.

Giving Hispanic shoppers a hand can be as simple as putting healthy items on sale. Pathmark, Montvale, N.J., offers health information and price discounts through its

Live Better loyalty program, and makes an effort to bring members of the demographic into the fold.

“The program offers information on choosing better foods throughout the supermarket as they might relate to different health concerns, whether it be diabetes, which is very prevalent in the Hispanic community, as well as obesity and cholesterol issues,” said Jacqueline Gomes, Pathmark's lead dietitian.

It's important, at the same time, to recognize cultural distinctions where they exist. Martin Ferro, senior planner with The Integer Group, Denver, and its Hispanic marketing arm, Velocidad, said that value is important to Hispanic consumers the majority of the year, but not around holidays and other major shopping events.

“[Hispanic shoppers] care more about indulging their families during the holidays, and less about value,” he explained.

H.E. Butt Grocery Co., San Antonio, knows that its Hispanic shoppers search out low prices, and that many of them use vouchers from the federal Women, Infants and Children (WIC) program. To accommodate them, the company developed a bilingual WIC brochure that calls out products in various categories, highlighting private-label items wherever possible. H-E-B also reconfigured its checkout system to make it easy for customers to manage their selections and stay within guidelines.

“With these new standards, they get either $6, $8 or $10 worth of produce, but most produce is sold by the pound,” said Rosalinda Benner, nutrition specialist with H-E-B. “With our program, as soon as they swipe their card through the cashier station, the computer will arrange all of the produce from highest amount to lowest so that they can delete what they don't want before they pay.”

When it comes to marketing and merchandising these products, assumptions can run rampant. Many retailers, Ferro said, translate their signage and marketing literature into Spanish and figure that's enough.

“Just because it's bilingual doesn't mean it's relevant to Hispanics,” he explained.

Images often resonate more deeply than words, said Ferro. Then again, sometimes they don't. That's why it's vitally important, he and others noted, to invest in market research that will determine where shoppers come from, their acculturation level and what appeals to them. Puerto Rican consumers will have different values from Mexican ones. First- and second-generation Hispanics tend to prefer signage in English over Spanish.

Indeed, the term “Hispanic” may be a catch-all, but that doesn't mean there's one right way to sell to everyone who falls under it, Orcutt pointed out.

“It's very hard to put every Hispanic into the same box,” she said.

H-E-B has done its homework, and knows that the best way to reach its Hispanic shoppers is through the women of the family. That's why Benner regularly schedules events and get-togethers in the communities H-E-B serves. Recently, she held a healthy cooking class at an area high school for mothers of students. Out of the 45 who attended, only two spoke English.

“We're focusing on the moms and how they prepare food for the children,” said Benner, who is bilingual. “We try to take the traditional dishes and teach them how to make them healthy.”

Childhood obesity is a growing problem within the Hispanic community, and Ferro said that focusing on kids' health is the key to engaging their mothers and the rest of the Hispanic community. In addition to its outreach for women, H-E-B holds tastings at middle schools that introduce kids to foods like quinoa, mustard greens and fresh vegetables, and healthy expos with separate seminars for each member of the family.

“Kids are the trigger point,” said Ferro. “That's what motivates the Hispanic mom to take action, to introduce new products to the household.”

TAMALES WITH A TWIST

Bashas', Chandler, Ariz., believes that fun, interactive events will also motivate Hispanic shoppers. Last month the company, under its Food City banner, held its 10th Annual Food City Tamale Festival in downtown Phoenix. It was quite a party, according to Bashas' dietitian Barbara Ruhs — complete with mariachi bands, a parade, promotional booths and a tamale cook-off that pitted cooks from around the state against each other.

Although there were no “healthy” tamales per se, wellness had a presence at the event in the form of a screening booth offering free blood pressure and diabetes checks, pamphlets and other information.

Whether it's in stores, through advertising or at events like the tamale festival, Ruhs' advice to Hispanic customers is to make small, healthful changes to their traditional diets. It's an uphill battle, for sure: Beans and tamales are often made with lard, and sweet, fattening foods like fruit sodas and oversized pastries have deep roots in the culture.

But there are also plenty of healthful foods to build upon.

“My sense is that you start with the traditions of the diet that are already healthy,” said Ruhs. “They eat tons of fruits and vegetables, so you just talk about the benefits of eating more produce, and why fresh fruits and vegetables are so wonderful, and adding more produce to existing dishes and highlighting how healthy those things are. From there is when you talk about making some substitutions.”

Benner takes the same approach at H-E-B, where last year she began producing short, bilingual healthy recipe videos and posting them on the company's intranet. She hopes this will spread the healthy message to employees, who will then pass it along to customers. This year, Benner said she'll begin posting the recipes to H-E-B's website.

“People learn so much better visually,” said Benner. “If they see a really simple recipe and know it's three or four ingredients and it's really healthy, they think, ‘I can do that.’”