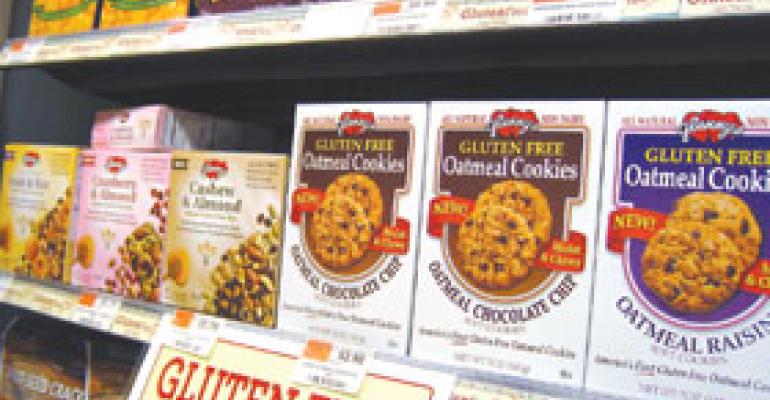 Before the sun comes up over Brooklyn, N.Y., chefs in three kosher kitchens begin their day's work at upscale Pomegranate supermarket.

While they prepare dozens of private-label delicacies under the supervision of rabbis in separate kitchens reserved for dairy, meat and pareve foods (those prepared without meat, milk or their derivatives), parts of the store's perimeter are cleared of fare prepared fresh the previous day. It's time to make room for new batches of Rich & Creamy Butternut Squash Soup, Diet Sugar-Free Greek Salad, Fresh-Squeezed Orange Juice, Pareve Vodka Sauce and Cinnamon Loaf Babka that bears the Pomegranate name.

Dozens of packaged bakery items, artisan breads, prepared sushi and other fresh food often have their prices slashed within an hour of the store's closing — one of the busiest times of day at Pomegranate. But the crowd is never large enough to clear the shelves. That's deliberate to ensure that shoppers, no matter the time of day, aren't faced with out-of-stocks. There are no worries about wasted food since whatever isn't sold gets donated to local charities before the store opens in the morning.

“Nothing is left over day to day,” Matt Swerdloff, director of marketing and corporate development for the 20,000-square-foot kosher supermarket, told SN.

Pomegranate's system of replenishment isn't dictated by kosher law, rather it falls under the independent's corporate slogan: “Everything better.”

During its two years of operation, the retailer has endeavored to deliver just that to a shopper base split 50/50 by those who keep kosher for religious purposes and more mainstream consumers who shop its store for high-quality foods. Products must be kosher to gain placement, but buyers search for items that will also appeal to the more conventional set who chooses Pomegranate for its selection, or kosher foods in general, because they're more closely scrutinized for quality and safety.

“At Pomegranate we didn't want kosher to be a hitch for us,” explained Swerdloff. “Obviously, pork cannot be kosher, but anything besides that we can do.”

The physical store draws shoppers from all five boroughs of New York City and the surrounding areas, while online orders come in from as far away as Europe.

Consumers aren't necessarily drawn by price since Pomegranate's standard for excellence trumps its need to undercut the competition.

“Price is not at the forefront of how we do things. It's more about quality and the best we can do,” Swerdloff said.

Take for instance the retailer's commitment to a pain-free shopping environment. Long before opening its doors, owner Abraham Banda and his team began dreaming of the ideal grocery excursion. “We wanted to turn shopping into an experience. A calming, easy-going experience,” said Swerdloff.

After mulling over the reasons why so many consumers dread weekly trips to the food store, they decided to include free, valet parking — a first for a New York City grocer, but a necessity for one looking to ensure a stress-free outing since area parking is limited.

“We looked at every trigger where someone could have an unpleasant experience, and turned it on its head,” Swerdloff said.

Since limited space and dust are sore spots with urban shoppers, aisles were made wide and hardwood floors chosen since they have a homey feel and are easy to clean. Each night a crew cleans the store from top to bottom and polishes the floor.

The potential for bottlenecks at checkout was also addressed and a unique system was developed to avoid them. Pomegranate doesn't designate express aisles since it considers every aisle express. To maximize efficiency, a store associate loads items from a shopper's cart onto the conveyor belt. Like items are grouped together in a way that makes their UPC codes easily accessed and scanned by the cashier.

Shoppers are not only pleased with the amenities, but with the store's selection.

“It's the best supermarket,” said shopper Monique Cohen in Pomegranate's cereal aisle last week. “By the time you leave you end up spending a lot. Not because the prices are high but because they have everything, so you buy a lot.”

Cohen's cart included cheeses and leafy greens — foods that are taken for granted by conventional eaters, but harder to come by in the kosher world.

Finding suitable options is a challenge since most aged cheeses are produced using rennet, which is derived from pigs or other mammals, noted Marcia Mogelonsky, global food analyst with Mintel, Chicago.

The majority of cheese makers in Europe are working off hundred-year-old recipes that include authentic rennet, so many are resistant to working with the synthetic rennet required to produce kosher cheese, said Swerdloff. This makes it one of the hardest foods for kosher supermarkets to source.

“We try to bring in everything we can get our hands on,” said Swerdloff, who just returned from a trip to the SIAL show in Paris where he and Banda scouted out kosher cheeses and meats. Shoppers appreciate the effort.

“They have all different kinds of specialties like cheeses and jams,” noted Jackie Tawill who lives in Pomegranate's Midwood section of Brooklyn and keeps kosher for religious purposes. The neighborhood is home to a growing population of Orthodox Jews, many with large, young families.

Pomegranate caters to their needs with an extensive selection of kid-friendly treats like private-label freshly popped popcorn, nuts, chocolates and jelly beans in flavors like Buttered Popcorn, Toasted Marshmallow and Smoothie Blend. Pomegranate buys the sweets in bulk and repackages them in 8- to 12-ounce containers. “The candy is the only [private label] not made in-house,” explained Swerdloff.

Compared to more conventional markets, some of Pomegranate's Center Store sections might be considered disproportionate. Its gluten-free section is home to a modestly sized mix of granola, cookies, rice pasta and a few baking mixes, while a much larger space is dedicated to snack-size packs of chips and pretzels for kids' lunchboxes — many sold six for $1. A substantial amount of space is also reserved for different-sized disposable store-brand baking dishes and lids that have been certified kosher.

Pomegranate caters to home chefs in more ways than one. Last year, the gourmet grocer hosted a series of “Meet the Celebrity Chefs” events to promote upscale cooking. During one event, renowned kosher cookbook author Susie Fishbein, known for her “Kosher By Design” books, made Middle Eastern Martinis and Creamy White Bean Hummus with Steeped Tomatoes. Swerdloff hopes to broaden the horizons of kosher cooks by bringing the series back soon.

Perhaps the grocer is looking to demystify kosher for the growing number of consumers who've turned to these foods for reasons other than religion.

A Mintel study found that the majority of kosher food buyers — 62% — purchase kosher foods for quality, followed by reasons such as “general healthfulness” (51%), food safety (34%) and religion (14%). Indeed, a segment of consumers is drawn to the extra scrutiny given to kosher foods.

“The biggest thing for consumers is food safety, since there is extra inspection,” said Mogelonsky.

Take for instance the U.S. Food and Drug Administration's take on “natural contaminants.” The agency is much more tolerant of insect fragments than kosher certifiers who require fruits and vegetables be completely insect-free.

Rabbis, employed by a third-party hired by Pomegranate to monitor its strict adherence to kosher rules, inspect each individual produce item to ensure that it is insect-free. Whatever doesn't pass the test is thrown away, so it never reaches the shelf.

Leafy greens pose the biggest threat. In fact, during the summer Pomegranate was unable to carry dill due to an infestation. Since it wasn't up to snuff, that was the only option.

“We will not comprise our supervision, our kosher [status] or our quality,” said Swerdloff.