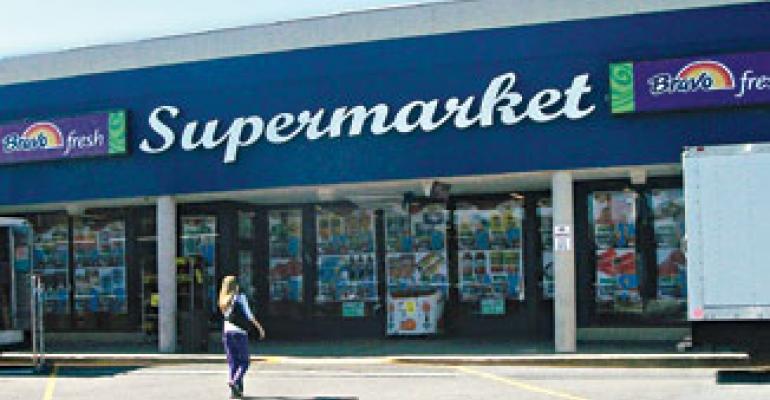 When the Torres family opened its newest Bravo store in Port Jefferson, N.Y., it knew it would attract mainstream shoppers, but it was surprised with just how many.

“All types of people come here, not just Hispanics, because of our fresh food and good prices,” owner Tony Torres told SN during a store tour.

“They'll come holding a recipe and ask for a certain ingredient,” he said.

The Torres family operates three food stores on Long Island. Along with the Port Jefferson unit, it has a 27,000-square-foot flagship Bravo-banner unit in Central Islip and a C-Town in Amityville.

At the Central Islip store, Hispanics account for about 90% of the shoppers. While Torres knew the demographics would be different in Port Jefferson, he was surprised to see mainstream shoppers accounting for about 40% of the customer base.

He attributes it to the fact that, along with demand for ethnic recipes, mainstream consumers are seeking out fresh food at good prices.

Running a food store is nothing new for the Torres family, which has multi-generational experience in food retailing. But the family has taken the business to new heights.

“We really wanted to emphasize the freshness of our meats, produce and other items,” he said.

Another update is the addition of a bakery department, which isn't available in Central Islip. Located adjacent to the front entrance, the department features Hispanic favorites like flan and dulce leche cake.

Hispanic brands can be found throughout the store, but the bulk of the assortment can be found in an ethnic aisle. Much of the aisle is devoted to hundreds of Goya products. Farther down the aisle are sections for several different Hispanic countries and regions, including the Dominican Republic, Peru, Ecuador, Mexico, Honduras and Jamaica.

Hispanic items are represented just as well in perimeter departments. The produce section, for instance, features Mexican tomatoes; Nopal, a Mexican cactus plant used as an accompaniment to egg, meat and other dishes; and Jicama, a Mexican root vegetable that is commonly eaten raw.

The fish department caters to Hispanics by featuring whole fish.

“There aren't many other places that sell whole fish,” Torres noted.

Customers SN interviewed lauded the store for its fresh food and good prices.

Lauren Hamilton, of Coram, N.Y., shops at the store two to three times a month. She is Caucasian and her husband is Puerto Rican.

“I like the sales here,” Hamilton said. “I buy rice and beans for my husband when they are on sale.”

Charlotte Doyen, also a Caucasian, shops at the store once a week because she likes the prices on produce, meat and other items. “Where else can you get cole slaw for $1.29 a pound?” she said.

Meanwhile, Pedro Rivera, a native of El Salvador, likes the store for its vast cheese selection.

Such customer comments show that the store is successfully meeting the needs of all its shoppers, not just the Hispanic ones, said Mitchell Klein, vice president of government relations for Krasdale Foods, White Plains, N.Y., Bravo's distributor of national brands and the Krasdale private label.

Catering to multiple ethnic groups is a smart move considering more people are learning about Hispanic foods from international travel, dining out and cooking shows on television, said Klein.

“People may visit a Spanish restaurant and want to re-create a dish they ate there,” he said.

Krasdale is the food distributor for 3,800 stores — including Bravo, C-Town, Market Fresh and Shop Smart — in seven states in the Northeast and Southeast. While each of its stores is individually owned, it helps each owner micromarket to the surrounding neighborhood.

“We run demographic studies to find out the type of shopper who will be in their stores,” Klein said. “We then suggest the right portfolio of products.”

Krasdale runs a direct-store-delivery program for its retailers so that they can get better deals on Goya and other ethnic products.

“Our DSD program helps our retailers operate on a level playing field with the big chains,” he said.

The demographics of the Port Jefferson area showed that the store needed to emphasize a greater assortment of national brands as well as natural and organic foods.

Klein said Bravo is wise to separate the ethnic section by country of origin.

“It's critical to cater to the different Hispanic ethnicities,” he said. “By grouping all the foods together, it's like saying all New Yorkers eat the same food.”

Klein said there are nine distinct Hispanic groups — each with its own flavor preferences.

“They all have their own particular brands from back home,” he said.

Krasdale assists Bravo with in-store promotions like the recent Junta Hispana, a storewide sale on various Hispanic items. The event was timed to coincide with the massive Junta Hispana, a Hispanic heritage celebration held in Queens, N.Y., over the summer.

PORT JEFFERSON, N.Y. — When Silverio Torres emigrated from the Dominican Republic in 1963, he quickly got a job in a bodega in New York City.

He worked hard and eventually opened his own bodega in Brooklyn. That led to a long career in food retailing on Long Island.

Today, his sons, Tony and Jose, run the family's Bravo-banner stores here and in Central Islip. A nephew manages the family's C-Town banner in Amityville, and many other family members are employed in different positions in all three stores.

“It's a family business that's been passed on from generation to generation,” noted Mitchell Klein, vice president of government relations for Krasdale Foods, White Plains, N.Y., Bravo's distributor of national brands and the Krasdale private label.

A random sample of Bravo's prices on national, private-label and ethnic brands