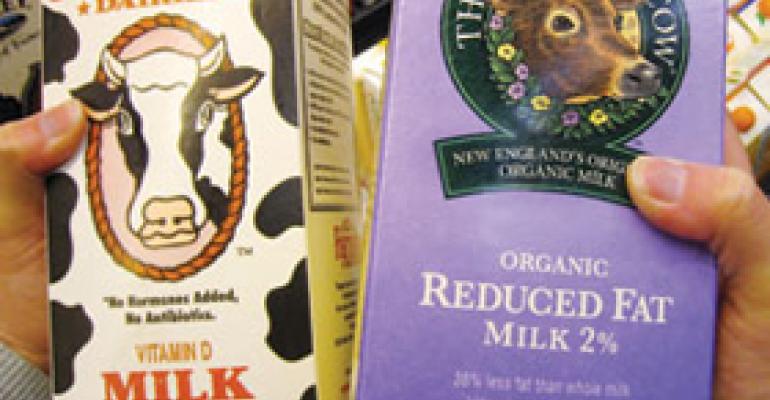 The market for organic foods has looked unstoppable in recent years, with sales growing from $2.1 billion in 2003 to an estimated $5.2 billion in 2008 a 142% increase according to Mintel International Group's Organic Food Report, October 2008. And, despite the deepening recession, many experts believe that sales of organic products will continue to increase in 2009, albeit at a slower pace. Organic

The market for organic foods has looked unstoppable in recent years, with sales growing from $2.1 billion in 2003 to an estimated $5.2 billion in 2008 — a 142% increase — according to Mintel International Group's Organic Food Report, October 2008. And, despite the deepening recession, many experts believe that sales of organic products will continue to increase in 2009, albeit at a slower pace.

“Organic sales definitely aren't dipping below what they were,” said Barbara Haumann, spokeswoman for the Organic Trade Association, Greenfield, Mass. “They are increasing, and increasing at a higher level than non-organic foods.”

While the results of OTA's annual Manufacturers' Survey — with sales figures for 2008 — won't be finalized until March, Haumann said the OTA has been very optimistic that the survey will reflect industrywide growth of between 10% and 20% for 2008.

“With the plummeting of the economy and [losses in consumers'] 401(k)s, coupled with rising prices, people are spending less on organics, especially in the less vital categories,” she said.

“People are spending 10% to 15% less on groceries in general than six months ago. They are not giving up entirely, but watching what they spend their money on, which primarily is staples like dairy, cereal, eggs, food for their children rather than themselves, vegetables, fruit, and so on. They also are spending less on cookies, treats and indulgence items.”

Sales of organic produce at United were up about 10% this past year, but remain only about 3% of total produce sales, Darvel Kirby, business director of produce, told SN. The more popular organic items include prepackaged organic salad blends and seasonal fruit, especially organic grapes and strawberries, he added.

“We expect sales to remain about the same this year, without any increase,” Kirby said. “We feel that due to the economy, less people will be trying the more expensive organic produce, but people [who were] already buying organic produce will continue to do so.”

Beyond the economy and price issues, growing competition is also affecting sales of branded organic products, as all natural foods, locally grown foods and private-label organic brands gain more exposure, Mintel's study noted. This may be one of the causes behind a slowing of price increases in the category. Mintel estimates that organic food prices increased 14.3% in 2008, a smaller percentage increase than in years past.

Kirby said that while he feels interest in organic produce will continue, local is very popular in United's produce departments.

“The same number of people are still shopping, but are buying less each time,” Lawrence said. “Or, they are switching to the less expensive organic store brands such as [Topco's] Full Circle, or [Target's] Archer Farms. Before, prices were not an issue, but now they are carefully thinking organic vs. traditional. If ‘traditional’ is natural with no growth hormones, additives and so on, and is cheaper, then more consumers will opt for that over organics.”

However, in light of the many food recalls and foodborne illness outbreaks during the past several years, consumers who are concerned about the integrity of the food supply, as well as consumers for whom organic represents a more healthful lifestyle, will likely choose the somewhat more expensive store-brand organics over mainstream products, Mintel's report said.

“If the natural and organic companies can issue more coupons or lower prices, we can combat the economy and keep the budget-challenged consumer buying organics,” Lawrence said, adding that much of the healthy organic growth at United can be attributed to the addition of Full Circle as its store brand, and increased use of coupons or bulk items with a value image.

“Die-hards are going to continue to buy,” Lawrence added. “When you buy organic, you believe it is better for you and the planet. People are becoming more introspective about what they eat. There is definitely growth in the category, just less than before.”

Haumann agreed that more organic consumers are using coupons to save.

“People can shop around, and there are private-label brands out there, so there are a lot of opportunities for consumers to choose organic products,” she said.