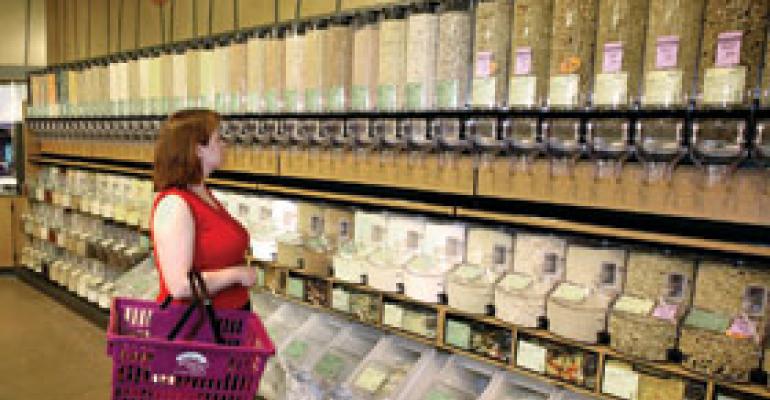 The ongoing recession has undoubtedly made U.S. consumers more price-sensitive, but organic foods are holding up surprisingly well this year. The organic food market has experienced tremendous, double-digit growth during the past several years, and growth is expected to continue in 2009, albeit at a slower rate. According to the Organic Trade Association, Greenfield, Mass., U.S. organic food sales

The ongoing recession has undoubtedly made U.S. consumers more price-sensitive, but organic foods are holding up surprisingly well this year. The organic food market has experienced tremendous, double-digit growth during the past several years, and growth is expected to continue in 2009, albeit at a slower rate.

According to the Organic Trade Association, Greenfield, Mass., U.S. organic food sales have grown between 17% and 21% per year for each of the last 10 years. The OTA had originally estimated an 18% growth for 2008, but because some consumers pulled back on purchases during the second half of the year, the association revised its projection down to 10%.

“While organic sales are not as strong as they have been in the past, natural and organic sales are still doing well and have rebounded somewhat since the beginning of the year,” said Maria Brous, spokeswoman for Lakeland, Fla.-based Publix Super Markets.

“The rate of sales increase is slower this year than it was during the first quarter of 2008, but our sales across all categories — and customer counts in all stores — remain strong,” said Russ Ruby, director of merchandising at PCC.

“Looking at the top organic fruit and vegetable items, the impact of rising prices on sales is evident,” Lutz said.

“For berries, apples, citrus and tomatoes, average retail prices remained relatively flat, and therefore dollar and volume growth was generally aligned. Bananas, packaged salads and lettuce increased retail prices around 10%. In response, dollar sales increased at a faster rate than volume sales. Berries and tomatoes were the only two organic produce items within the top five to decline in dollars and volume. Their minimal price increases indicate these losses were due to a change in consumer preferences rather than increasing prices.”

Of course, the fact that retail prices for organic products are consistently higher than their conventional counterparts has long posed a barrier to category growth, and that challenge won't likely go away now that shoppers are watching their food budgets more closely than ever. In a recent survey included in Mintel's “Organic Food — U.S., October 2008” report, 78% of all respondents listed price as a concern when it comes to buying organics. To continue building growth, retailers may have to rely on better promotions and a focus on value.

“In tough economic times, sales become more important, whether you are a conventional shopper or a natural/organic shopper,” Brous told SN. “Throughout the year we focus sale ads on organic products, regardless of the economy.”

At Associated Food Stores, Salt Lake City, sales of organic produce are up from last year, and promotions on organic items are bringing their prices down close to conventional produce levels, according to Darin Larkin, organic produce buyer.

“[Produce is] still holding stable in the last few months, and so far our sales have not seen a decrease due to the economic slowdown,” Larkin told SN.

“All our categories at Associated Food Stores are seeing some increase in sales from a year ago, but the advertised items are seeing the biggest movement each week. Ad items are now close to conventional prices, and consumers are selecting organic produce in place of conventional.”

Larkin added that in his area, prices are less expensive than a year ago and AFS has more SKU's.

“We are offering better prices, and more items are advertised than in previous years — we have two or three items on ad every week. I believe our organic shoppers are still buying organic, and we are seeing more conventional customers buying organics for health reasons.”

“The retailer opportunity remains the same in this economy as before — to offer the right value equation of products that enable both the ‘value’ and ‘savvy’ consumer to build loyalty to their unique shopping experience,” O'Mahoney said.

“For example, the retailer should continue to integrate organic products with conventional products, to enable conversion for those consumers moving along the continuum of wanting a more healthy lifestyle for themselves and their families. Research has shown that this integration enables that conversion to both higher and more profitable transactions for the retailer, while simplifying the shopping experience for the consumer — a shopping experience that embraces the variety of choices for a spectrum of consumers looking for both value and lifestyle benefits from the products and services found within their stores.”

Many of the organic category's most loyal shoppers view the consumption of organics as an investment in their long-term health, and might argue that it is worth paying a little more for products produced without the use of chemical pesticides, herbicides, artificial fertilizers, artificial hormones or artificial ingredients. But O'Mahoney noted that those choices could become harder to make as shoppers have less disposable income.

“Overall, the economy has clearly made consumers rethink the value equation of both the products and channels where they are purchasing,” said O'Mahoney.

“The gap in pricing [between] regular products and organic products in some categories has shown an erosion of growth for organic products in both the perimeter and Center Store; however, the ever-growing segment of ‘savvy consumers’ who have made a lifestyle choice of purchasing healthy products remains strong, and their loyalty to purchasing both organic and natural products continues.”

PCC's Ruby agreed. “For many of our shoppers, PCC is part of their lifestyle choice, and they regard the purchase of healthy, organic food as an investment in their long-term health,” he said.

“They also appreciate that organically grown and produced food has more flavor and nutrition than conventionally produced food and therefore offers a greater value. However, purchasing patterns have shifted somewhat, in that shoppers are more attentive to featured and on-sale items and to the budget-stretching options bulk foods offer. We encourage our shoppers to buy seasonal and locally sourced organic products, buy organically in bulk, prepare meals at home and take advantage of case discounts.”

In addition, Ruby said PCC helps shoppers cope with the slow economy without sacrificing health by offering “back-to-basics in-store food demos, like just-add-water bulk soup mixes; PCC Cooks classes on cooking basics and recipes, such as “Soup simplifies your life,” “In season: cooking produce at its best,” and “Meals within the family budget”; and food selection and preparation information via PCC's website, electronic newsletter, and PCC's trained staff in every department.

“We help PCC shoppers keep their commitment to healthy eating by staying true to our brand, product mix and reputation as an advocate for the consumer — all elements that create a shopping environment and experience that supports their commitment,” Ruby told SN. “We also offer biweekly specials and featured items in all categories.”

For PCC, driving value while maintaining the product standards that the cooperative's members and customers expect remains a challenge, according to Ruby.

“We are working to reduce costs and promote more efficiently with our suppliers,” he said.

“We are staying focused on the long run and on improving our business practices, rather than cutting staff and reducing retails to make a number.”

Mintel's report said that to maintain organic consumers' attention when price sensitivity is high, retailers should offer a wider array of package sizes at different price points to help loyal organic shoppers find the products they want at prices they can afford, and that they “must emphasize the quality of organics and why the quality makes a difference.”

Suman Lawrence, Living Well business manager for Lubbock, Texas-based United Supermarkets, agreed that higher prices remain a barrier in the organic category, but added that she believes consumers who were already buying organic are continuing to buy despite the faltering economy.

“The core shoppers who live that lifestyle will not comprise on quality,” Lawrence told SN.

“Mothers with young children and new babies are still buying organics. They may have traded down to store brands instead, as these are cheaper.”

Because of the higher price points of Certified Organic fresh foods, some consumers are opting for private-label organic items or are switching to all-natural items.

United's bakery departments, for example, used to offer about 10 SKUs of organic breads, but when commodity prices spiked last year, the chain reduced the number of organic breads to two and converted others to all-natural, Tammy Kampsula, business director of bakery, told SN.

“This was done to keep the retail price increases to a minimum,” Kampsula said.

“In some cases, we absorbed the cost increases to keep the retail prices the same. When we made the change to all-natural, we did not see a decline in the sales. I believe this to be true because all-natural is still a healthy choice — all-natural breads are an excellent choice for those guests who are health-conscious.”

“Dairy as a whole is down about 13% for natural and organic; however, our private label has picked up some of the organic milk, butter, eggs and orange juice business from national brands such as Horizon and Organic Valley,” Lawrence said. “With this we probably are about the same level as the prior years.”

Private-label products were not included in Mintel's report, but the report did note that their influence on the market is growing.

Publix also has an organic private-label brand, GreenWise, which was launched in 2000.

“Sales of our Publix GreenWise brand products have proven to have a loyal following among our customers and resonate well with them,” said Brous.

“While perhaps more customers these days are switching to our Publix GreenWise brand strictly because of the economics, the price and quality of these products have long been an attraction to this brand.”

Mintel's “Organic Food — U.S., October 2008” report originally forecast the organic food market to grow some 14.3% in 2008. Now, in light of the current economic recession, the estimate has been revised down to 12.1% growth.

“Additionally, Mintel forecasts a further decline in 2009, as consumer food and beverage spending is curtailed and premium-priced options like organics are replaced with less expensive conventional products,” the newly revised report, published this past January, stated.

“While some consumers will continue to invest in higher-priced organic products, Mintel expects a general shift away from these higher-priced products. As consumers continue to budget, expect additional expansion in the private label arena to keep prices down, thereby lowering total dollar sales figures.”

While the economic climate continues to worsen and has caused worried customers to tighten their purse strings, it appears organic foods won't be taking the hit that some thought the category might.

“Our members remain loyal because of the value we provide on the natural and organic products they want, and the values we support in the community,” Ruby said.

“Customers enjoy discount incentives when they shop our stores, and they understand that their patronage helps keep the local outreach and education programs PCC's supports going strong.”

And with the price gap getting smaller, and consumer attitudes about health and lifestyle still evidently being held as a priority, retailers can use that to leverage their organic departments by emphasizing quality, taste and health, while offering more options within organic, such as private label.

“You may occasionally lose conventional shoppers to the difference in price. As for sales, Associated Food Stores is being more aggressive in our ads and in our everyday pricing. We believe organic sales will continue to grow over the next few years. Prices are coming closer to conventional, and the media continues to push the benefits to eating organics.”