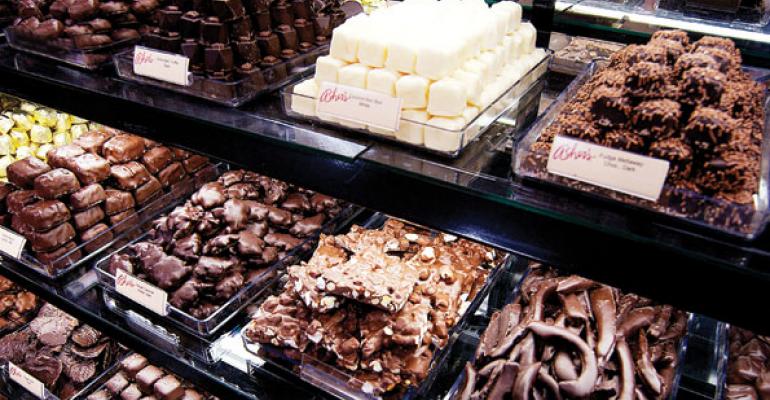 These Chocolates Are Something Special

Indeed, one of these things is not like the others, but chocolate lovers were willing to experiment at the fifth annual Chocolate Festival hosted by H.E. Butt Grocery’s Central Market.

Vosges Haut-Chocolat’s Black Pearl Bar, normally sold for $7.50 a pop, was just one of the confections sampled at the upscale event that infused chocolate into every day-part and eating occasion.

Enthusiasts sampled their way through the store, stopping for chocolate cherry bread, chocolate coffee, chocolate-covered popcorn, five chile cocoa-seasoned steaks and then of course, artisan confections brought to life by more than a dozen world-class chocolatiers.

“The amount of chocolate they have is huge,” observed Katrina Markoff, founder and chocolatier for Vosges. 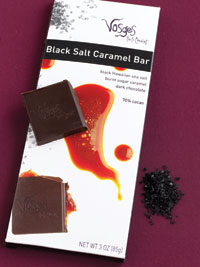 Guests were even treated to candy-making classes instructed by Markoff who demonstrated for about 140 onlookers how to make truffles infused with Guinness, champagne, curry and other surprises. “I showed them the whole range and how to do it at home,” she said.

Central Market is creating theater with chocolate at a time when the decadent sweet has surpassed coffee as the top-selling specialty food, noted Louise Kramer, spokeswoman for the National Association for the Specialty Food Trade, New York.

“Our research found that 70% of consumers say treating themselves is the top reason for making a specialty food purchase so what better way to treat yourself than with chocolate — it’s the quintessential treat,” she said.

Indeed, the sweet tooth is alive and well with chocolate candy sales rising 5.2% in food, drug and mass channels during the 52 weeks ending Feb. 19, 2012, according to SymphonyIRI Group, which attributes some growth to higher retails driven by commodity costs and decreased promotional support. 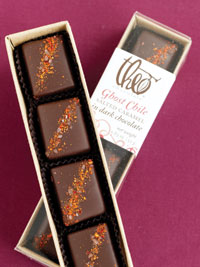 Gourmet chocolates are made more affordable when presented in smaller portions that lend themselves to impulse purchases. More than half of those surveyed by the NASFT report buying single-serve portions of chocolate vs. bars.

Specialty chocolatiers may be taking cues from mass marketed brands like Mars, which have made the switch from king sizes to multi-piece formats that enable sharing and encourage saving a piece for later.

Consumers are also minding their calories, with snack size chocolate candies the fastest growing in supermarkets, up 5.5%, according to SymphonyIRI.

“There are a number of companies that have offered smaller sizes in the past year, so it’s more of an impulse purchase than eating a whole bar,” said Kramer.

Marketers have also moved to make inroads with male shoppers, a segment more inclined to purchase chocolate as a gift than consume it themselves, Marcia Mogelonsky, a Mintel global market confectionery analyst, told SN.

“All the consumer survey data that we have skews heavily towards women; they’re the people who lean on chocolate for things like mood improvement. Men don’t go out and say, ‘I’m feeling rotten, I need to go buy chocolate,’ they’re going to go and buy a beer,” she said.

Fewer than three in four men (73%) eat chocolate compared to 84% of women, according to Mintel.

“There is always efforts to attract men to chocolate, not as a gift, but something they’ll buy for themselves,” said Mogelonsky.

“Hot chocolate is a way of appealing to men,” Kramer explained. “There is sort of a show-off factor that you can have cayenne pepper in your chocolate and like something so hot.”

“Chocolates with chilis and salty ingredients like bacon have gained a following,” said Jim Beckett, international operations manager for the Fairfield, Ohio-based store. Mo’s Bacon Bar is a top-seller.

Jungle Jim’s specialty shoppers practice portion control with high-percentage cacao chocolate. “They tend not to consume as large a portion and instead enjoy the more intense chocolate,” Beckett said.

Bars smaller than 3.5 ounces also sell well, as do dark chocolate varieties and brands such as Lindt, Ghirardelli and Jungle Jim’s brand. “We are up at about 9% growth,” Beckett said.

Kings Food Markets, Parsippany, N.J., prides itself on carrying unique confections in packaged form and from its full-service candy counters. In addition to every percentage cacao chocolate, Kings merchandises new and unique flavors in small batches that can be easily switched out if need be.

“Our buyers put tremendous effort into sourcing new items,” explained Vince Colatriano, vice president of grocery, dairy and frozen, for Kings. “Confections are big for us and a point of difference.”

Popular with the retailer’s upscale clientele are chocolates that incorporate caramel and sea salts and chocolate with fruit such as blood  oranges, strawberries, goji berries and pomegranates.

In addition to mainstream brands like Lindt and Ghirardelli, Kings seeks out specialty chocolatiers such as Jacques Torres, who makes truffles that incorporate milk chocolate, fresh cream and Taittinger Brut La Francaise champagne and milk chocolate bars infused with the flavor of Crème Brulee.

Though he was not familiar with the brand, Colatriano’s curiosity was piqued by a description of Wild Ophelia — a new line of “gateway” chocolate bars created by Markoff and picked up by Wegmans Food Markets, Bristol Farms, Whole Foods and others.

While Vosges uses worldly flavors, Wild Ophelia is inspired by regional classics. The Sweet Cherry Pecan milk chocolate bar contains tart cherries from Traverse City, Mich. and pecans from New Mexico. There is also a peanut butter and banana bar with dried bananas from Kauai, Hawaii, and a chocolate bar with barbecue potato chips supplied by a company in St. Louis.

Markoff created the brand to bridge the gap between premium chocolate and the mainstream.Whereas Vosges bars sell for $7.50, Wild Ophelia bars are priced at a more approachable $3.99.

“There is no one really doing innovative things in the category of Lindt, Ghirardelli, Green & Blacks. They’re doing safe things, but no one is making it exciting,” she said.

Wild Ophelia’s Beef Jerky bar has emerged as most popular, but the jury is still out on how newer chocolates will be received. Markoff’s latest creation combines chocolate, fried chicken and waffles.

“A lot of creativity is going into chocolate,” observed Kramer. “It’s being used as a canvas for culinary innovation.”