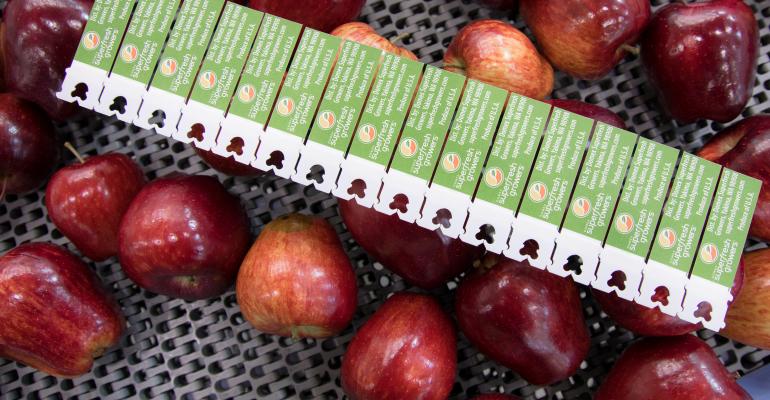 Less is more when it comes to produce packaging

Nobody can argue that packaging doesn’t have its place in the produce department. Blackberries would turn to mush in the hands of consumers picking through a loose assortment.

But prepackaged produce has expanded from a minimally employed tool to preserve product integrity to a ubiquitous crutch that takes a toll on the environment for the sake of convenience.

“We’ve gone through cycles in the produce industry,” says Don Harris, a longtime produce industry veteran who is the founder of Harris Consulting Solutions in Longmont, Colorado. “At one time, there was a lot of packaging. Publix [Super Markets in Lakeland, Florida] is a great example. They used to have the majority of their produce in packaging, and now they have gone the other way.”

But the current trend toward increased packaging comes at a time when retailers are seeking to distinguish their operations with signature fresh departments as a buttress against the growing appeal of discounters and online rivals.

“Some of the most successful retailers are making their reputations based on their fresh presentation, and all of this plastic packaging doesn’t look fresh,” says Harris, citing Wegmans Food Markets as an example of a retailer with a strong produce presentation, along with Sprouts Farmers Markets and Whole Foods Market.

Phoenix-based Sprouts has been one of the fastest-growing retailers in the U.S. over the last several years. It features sharply priced produce as the centerpiece of its offering, displayed in open bins reminiscent of a farmers market, with minimal packaging.

In fact, says Harris, the growing popularity of farmers markets should be a cue for supermarket retailers to rethink their produce presentations.

“Millennials talk about going to farmers markets a lot. Well, if you make your store look like a farmers market, that’s one less reason they have to go there,” he says. “We’re trying to get to the millennials, but maybe we need to go back to what it was that got us here.”

Challenges for growers and shippers

Harris, who has worked in produce management positions on both the retail and supply side, notes that growers and shippers also tend not to be fond of prepackaged produce, which interferes with their supply chain processes and forces them to stockpile custom packaging inventory that may never get used.

Overly packaged produce also runs contrary to the environmental sustainability goals of both retailers and suppliers. About 40 percent of the plastics used in packaging end up in landfills, according to research from the Ellen MacArthur Foundation, and only 14 percent gets recycled.

Consumers, especially millennials, are paying close attention to packaging sustainability as they shop for groceries. According to the Hartman Group’s “Sustainability: Transparency 2015” report, Styrofoam food containers and plastic food containers are among the top five packaging issues that most concern consumers.

According to research from Kwik Lok, a maker of plastic closure tabs for plastic bags, consumers believe that overly packed product conveys a “manufactured” feel that is contrary to the more natural, fresh lifestyles they are seeking to lead.

“Nothing screams, ‘We're not practicing sustainability, nor do we [care]’ like something unnecessarily packaged,” says Ashley B., one of the subjects of the Kwik Lok Packaging Consumer Perceptions report.

Kwik Lok plastic closures offer multiple benefits for retailers, produce suppliers and consumers, including the minimal environmental footprint of the reusable clips, especially when compared with many of the packaging solutions that currently enter the waste stream.

“These clips are often reused by consumers many different times for different purposes,” says Bruce Cox, regional director, Kwik Lok. “People also like the fact that Kwik Lok is so easy to use. They make it easy to open and easy to close your bags.”

In addition, Kwik Lok offers a safer, environmentally friendly alternative to metal closures, he says. Made entirely of plastic, Kwik Lok clips eliminate the risk of food contamination from metal elements being used in the packaging. Plastic closures can also alleviate headaches for shippers who run their product through metal detectors for safety reasons.

Consumer concerns about packaging have led to the development of a handful of package-free food retailers, mostly in Europe, which bill themselves as “zero waste” grocery stores. In the U.S., Austin, Texas-based food retailer called In.gredients made a valiant effort to go package-free when it opened in 2011, before conceding that some packaging is necessary, illustrating the challenges retailers face in seeking to reduce packaging.

The independently owned In.gredients, which was funded through a crowd-funding website for startups, continues to envision a world in which food retailing moves toward package-free product displays.

“We foresee the food and grocery industry moving in the direction of package-free eventually, and we hope to continue to be pioneers and vocal advocates,” the company says in a statement. “For now, we’re choosing to more heavily focus on zero waste, local food and community.”

Grocery stores such as In.gredients encourage customers to bring in their own reusable containers to package product themselves in-store. But such environmentally friendly behavior would prove overly cumbersome in more traditional supermarkets.

Instead, retailers can try to meet consumers halfway. By offering thin plastic bags on rollers with reusable plastic tabs for closure alongside their colorful displays of bulk, fresh produce, retailers can make an effective statement about both their commitment to sustainability and their capabilities as a merchandiser.

“We always had Kwik Lok with our bags,” he says. “It’s advantageous for a lot of items, and the cost of Kwik Lok and the bags is minuscule, compared with putting it prepackaged containers.”

Sponsored Content
Grocers must keep their contactless guard up.
Aug 21, 2020