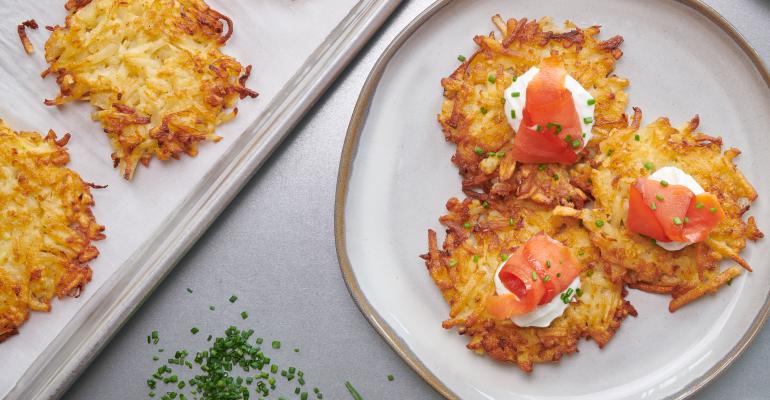 Retailers can compete for foodservice customers with versatile potato products.

Plant-based options have proliferated on foodservice menus as consumers increasingly seek to reduce their consumption of animal-based proteins.

Foodservice customers are opting for more plant-based dishes for multiple reasons, but health is one of the main drivers of the plant-based trend, according to The Hartman Group.

“Plant-based reflects ideals around a balanced approach to eating that incorporates variety but also leaves room for play and discovery,” the research firm said in a recent blog post.

The Hartman Group reports that 18% of consumers say they have tried a plant-focused approach to eating in the past year, including vegetarian, vegan or flexitarian diets.

A report from Packaged Facts, meanwhile, found that 36% of consumers identified themselves as flexitarian because they eat meat or poultry, but regularly incorporate vegan or vegetarian meals into their diets.

Similar to the flexitarian diet, Whole Foods Market recently cited “reducetarianism” as a top-10 trend for 2022. The retailer describes this diet as “reducing consumption of meat, dairy and eggs without cutting them out completely.”

The NPD Group’s Future of Plant-Based Snapshot report notes that most plant-based consumers also eat animal products, with only 11% of consumers identifying as strictly vegan or vegetarian. The report also finds that while health and wellness are the main reasons people consume plant-based alternatives, concerns around the environment, sustainability and animal welfare are not far behind.

Mainstream restaurants have rolled out a variety of plant-based options, including burger, chicken and seafood analogs to appeal to consumers cutting down on their meat intake. According to a 2021 SNAP Food Profile on Plant-Based Menu Penetration from Datassential, the plant-based category is expected to outperform all other foods, beverages and ingredients on restaurant menus during the next four years.

As supermarket prepared foods departments increasingly seek to compete with restaurants, it has become more important for retailers to offer a variety of flavorful and innovative plant-based options.

Offering dishes that feature potatoes can be a great way to incorporate more plant-based foods into a prepared-foods menu. Potatoes are America’s favorite vegetable, according to the 2021 Consumer Attitudes & Usage Study from Potatoes USA, and they are versatile—mashed potatoes and hash browns can be incorporated into breakfast, lunch and dinner menus as a part of appetizers, sides and entrées.

They can be used as the base for a variety of dishes, and built up with other vegetables, nuts, seeds, sauces, plant-based proteins and other add-ins to create new and innovative menu items, says Richard Hoelzel, corporate executive chef, foodservice, at Idahoan®, which offers several different potato products specifically designed for foodservice applications.

Many speed-scratch mashed potatoes can be prepared ahead of time and refrigerated for up to three days, or they can be stored in a heated deli case for up to two days, says Hoelzel.

“This is especially convenient for serving in the deli case and in pre-packed grab-and-go meals,” he says.

He also notes that hash browns can be used in a variety of menu items beyond breakfast, such as in salads and bowls.

The products are made without sulfites, preservatives, artificial colors or flavors. The company’s proprietary Fresh-Dried™ cooking method respects and honors the integrity of the potato—by using naturally occurring ingredients found in the potato, Idahoan maintains the natural flavor, structure, balance and composition of the potato.

“You’ll only find this one-of-a-kind method with Honest Earth and Idahoan products because we specifically pioneered this approach,” says Gentry. “We cook, slice and mash our 100% Idaho® Potatoes—then we simply remove the water.”

Idahoan and Honest Earth also strive to incorporate sustainable practices, an important selling point for today’s consumers that can also earn a higher price point. Datassential’s Sustainability Report 2020 found that 43% of consumers are willing to pay between 50 cents to $1 more per menu item for sustainable options.

Examples of Idahoan’s sustainable practices include:

• Water reuse—which resulted in more than 404 million gallons of water being reused for crop cultivation in 2020.

• Reduced carbon emissions—Because Idahoan removes all the moisture from its fresh-dried potatoes, they are seven times more efficient to transport than raw potatoes.

Sponsored Content
Why retailers should be betting big on back to school
Aug 05, 2022