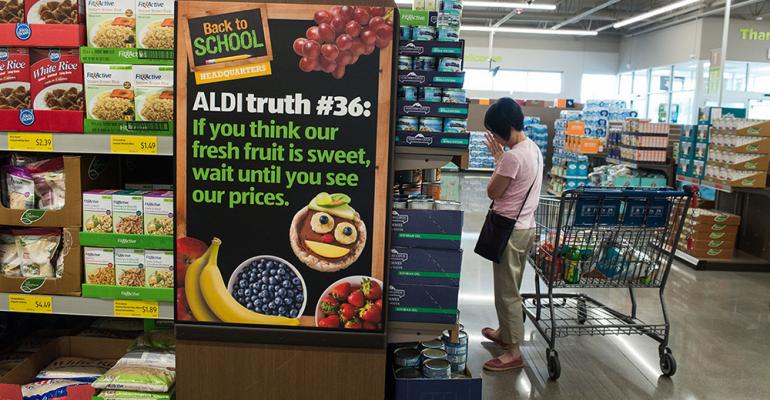 In another sign of increasing competition in the Southeast U.S., Aldi on Tuesday announced plans to establish a new distribution center and regional headquarters in Dinwiddie County, Va., near Richmond.

State and local officials said the limited assortment discounter would invest $57 million to establish a division headquarters and 500,000-square-foot distribution facility that would support 32 existing stores and 60 new store sites to be built in the state in the coming five years. Virginia successfully competed against North Carolina for the project, which will create 145 new jobs, state officials said.

“The decision by ALDI to choose Dinwiddie County as their division headquarters and distribution center is a wonderful testament to Virginia’s economic development assets and competitiveness,” Virginia Gov. Terry McAuliffe said in a statement. “The Commonwealth continues to be a top state for the retail and distribution industry, and I am pleased to welcome one of the nation’s fastest growing retailers to Virginia. This announcement is a significant win for Dinwiddie County and a great step forward in our efforts to diversify and build a new Virginia economy.”

The move by Aldi comes as its fellow German-controlled rival Lidl is at work on securing its own East Coast sites for a U.S. invasion to begin no later than 2018. Lidl over the last year has established U.S. headquarters in Arlington, Va. and is building three regional headquarters including one in Spotsylvania County, Va., which broke ground last October.

The greater Richmond area is in the midst of upheaval as both Publix Super Markets and Wegmans Food Markets are establishing new sites in the area and Ahold's Martin's chain is departing.

Aldi, Batavia, Ill., operates more than 1,500 U.S. stores in 34 states and serves more than 32 million customers each month. Aldi currently is in the midst of an accelerated growth plan to operate nearly 2,000 stores by the end of 2018.

“We’re proud to locate our new division headquarters and distribution center in business-friendly Virginia. The access to qualified and capable employees and transportation options first attracted us to this location, but it was the integrity and positive attitude of the Dinwiddie County leaders that truly won us over,” Jason Hart, CEO of Aldi, said in a statement.

The Virginia Economic Development Partnership worked with Dinwiddie County to secure the project for Virginia. McAuliffe approved a $450,000 grant from the Commonwealth’s Opportunity Fund to assist Dinwiddie County with the project. The Virginia Tobacco Region Revitalization Commission approved $680,000 in Tobacco Region Opportunity Funds. The company is eligible to receive state benefits from the Virginia Enterprise Zone Program, administered by the Virginia Department of Housing and Community Development. Funding and services to support the company’s employee training activities will be provided through the Virginia Jobs Investment Program.

“We welcome ALDI to the tobacco region,” said Delegate Terry Kilgore, co-chairman of the Virginia Tobacco Region Revitalization Commission. “This is a great investment for the Tobacco Commission. This will help Southside and Dinwiddie County to move forward, and it represents a great victory for the Commission and the Commonwealth. ”