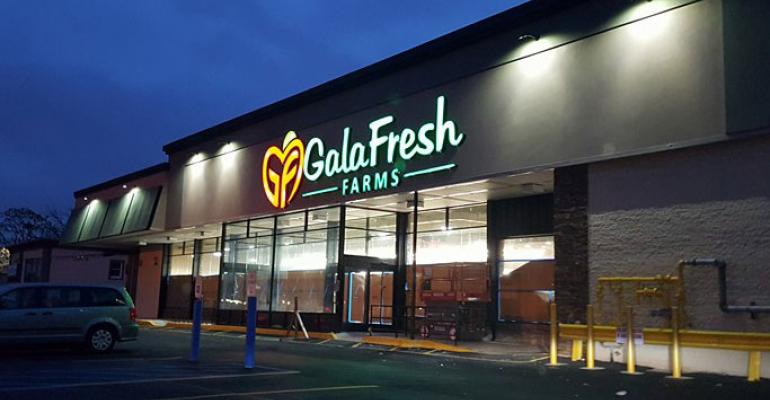 The first of at least five planned stores under the new Gala Fresh Farms banner opened this week in Baldwin, N.Y.

Freeport, N.Y.-based Aurora Grocery Group said it would operate the stores — including three sites acquired in the A&P bankruptcy auction — as part of the Key Food Stores Co-operative. Aurora also operates 20 Hispanic-focused Compare Foods stores as part of Associated Supermarkets. Those stores will remain with Associated.

“Gala Fresh is a different concept from Compare Foods, and we thought going with Key Food was a better fit for the type of store it will be,” Omar Jorge, a partner in Aurora, told SN. “Our Compare stores have been with Associated since the 1980s and we’ve been very happy with them, and we intend to stay with them.”

In addition to the Baldwin location — a 25,000-square-foot site that previously operated as a discount general merchandise store — Aurora in coming months intends to open a Gala Fresh Farms store in at a former King Kullen site in Riverhead, N.Y.; as well as sites in Brooklyn, N.Y.; Passaic, N.J., and East Paterson, N.J. The latter three stores were acquired by an affiliate of Aurora during A&P’s bankruptcy auction this fall.

According to Key Food, Gala Fresh Farms stores will feature fresh offerings including an extensive selection of fresh seafood; hot prepared food, sushi, and fresh bakery items. It will offer organic and conventional produce, kosher items and fresh coffee by the pound. The company said it intended to add a large craft beer selection.

“The way we think about Gala Fresh is that a good shopping experience should not be limited to a Whole Foods,” Jorge explained. “We’re going to offer an upscale experience tailored for the customers in the surrounding neighborhood. So while Baldwin and Paterson are not the same from a demographic standpoint, the communities in both places deserve a high-quality experience, and that’s what we’re going to provide.”

Aurora Grocery Group is owned by the Jorge, Peña and Gutierrez families. The company is holding grand opening ceremonies in Baldwin Friday with local officials and Key Food executives.