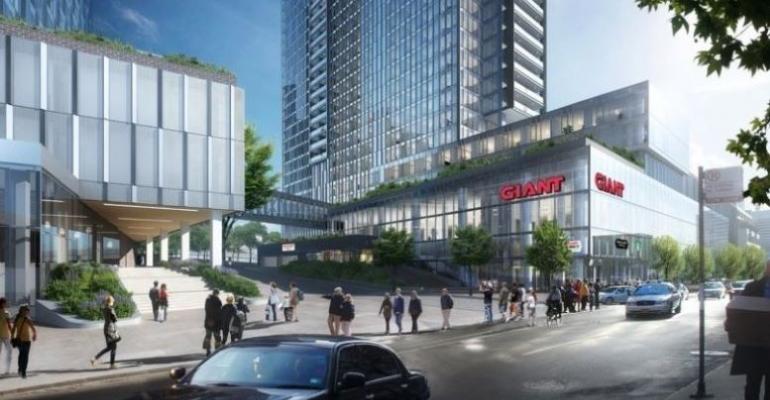 Stepping up its expansion into the City of Brotherly Love, Giant Food Stores has broken ground on a flagship store in downtown Philadelphia as part of the metropolis’ landmark River Walk project.

Carlisle, Pa.-based Giant today formally announced plans to build a 65,000-square-foot store at the corner of 23rd and Arch Streets, with a targeted opening of fall 2020.

An 8.5-acre, mixed-use development along the Schuykill River, River Walk encompasses two luxury residential towers plus commercial, retail, hospitality and community space and occupies one of the last remaining parcels for development on the waterfront, according to developer PMC Property Group. Giant’s store will be located in the 28-story Tower 1 at 60 North 23rd St. A pedestrian bridge will link the two towers.

Giant President Nicholas Bertram discussed the project in a recent interview with Supermarket News. He said the new flagship location will be the first-ever two-story store for Giant and its second full-size supermarket in Philadephia. The retailer has operated a Giant store on Grant Avenue since 2011.

“It will be our largest and most ambitious project in the city, without a doubt,” Bertram told SN.

"The features planned for the new River Walk Giant speak directly to the needs and desires of our city demographic,” Caplan stated at the event.

Serving Philadelphia’s Logan Square neighborhood, and within walking distance to Center City, Giant River Walk will feature high, open ceilings and a glass-lobby entrance on the tower’s first floor. Natural light and city views will enhance the shopping experience, and an outdoor terrace will give shoppers a picturesque place to enjoy food with a glass of wine or beer, the retailer said. Giant customers also will have exclusive access to an on-site parking garage. 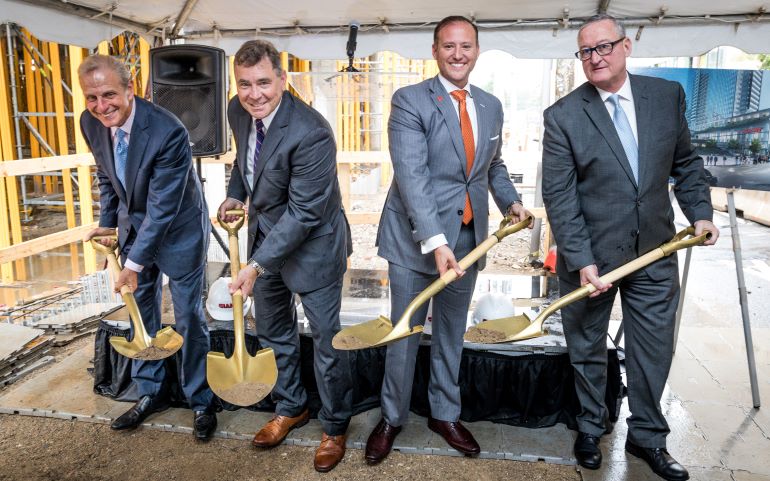 “I think the view from the terrace is going to be a spot that people will want to go to,” Bertram told SN. “I'm very excited about the project and look forward to the fall of 2020, when we open that store. It's going to be a really big deal for us.”

Inside the store, Giant said it plans a “breathtaking produce marketplace” offering more than 600 varieties of fresh fruits and vegetables, with local product being highlighted. The location also will have Giant’s largest plant-based foods department and products from Philadelphia-area food vendors, as well as provide access to the Giant Direct Powered by Peapod online grocery delivery and pickup service.

Giant noted that the River Walk store will bring some of the flavor of the shopping experience at Giant Heirloom Market, the new urban store concept that the company launched this year in Philadelphia.

So far, four Heirloom Market locations have been announced for the city. The first, a 9,500-square-foot store, opened Jan. 25 at 2303 Bainbridge St. in the downtown Graduate Hospital neighborhood. That was followed on Aug. 2 with the opening of a 9,950 square-foot unit in the city’s University City section at 3401 Chestnut St. Opening this fall in the Northern Liberties neighborhood will be an Heirloom Market at 1002 North Second St., across from Schmidt’s Commons, a public plaza with boutiques and restaurants. The Queen Village location, at 201 South St., is due to open by the end of 2019.

“The Grant Avenue store has been really important to us and was our first supermarket inside Philadelphia proper. As we studied the customers here, it became pretty clear that there are spots where you need a walk-up, smaller-format solution. That's why we invented the Giant Heirloom Market concept,” Bertram said in the interview. “But then as you get into the denser population areas and understand the different neighborhoods, there's room for larger sites, too, which is why we're so excited to announce our new flagship store on 23rd and Arch in the River Walk project.”

The River Walk store will create more than 200 jobs for the city, according to Giant.

"Giant has become an integral part of the Philadelphia region, both as a business serving our communities and as a tremendous partner to our area's nonprofits,” Kenney commented at the ground-breaking. “Not only has Giant done a great deal to improve the health and well-being of Philadelphians over the years, its recent growth has also brought hundreds of high-quality jobs to our neighborhoods. The announcement of Giant’s new flagship store is an exciting development for the city.”

The River Walk store comes on top of a $70 million investment that Giant announced in April 2018 to expand its store network across Pennsylvania. The effort includes the opening of six new stores, two remodels and four new fuel stations through the end of this year. Due to open soon is a new store in East Stroudsburg, which will occupy the space of a former Kmart and serve the Poconos vacation and recreational region.

"Giant’s investment in Philadelphia and our many communities across Pennsylvania will not only enhance the quality of life for residents, it will also add quality jobs to the commonwealth's economy,” according to Davin. “It's great to see a company that started here in Pennsylvania continuing to grow and invest in our commonwealth and our workers.”