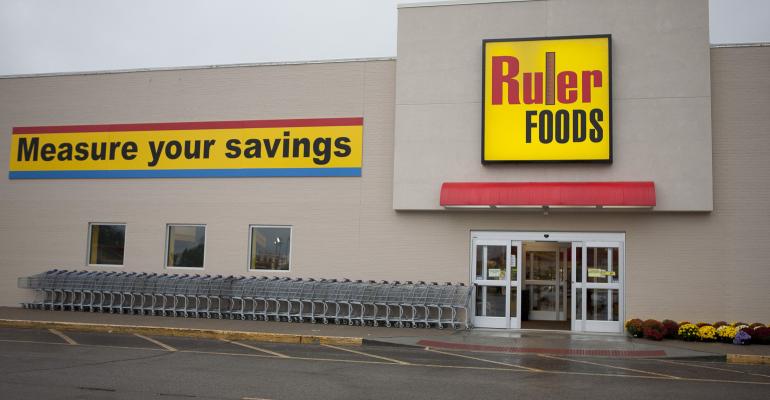 While industry attention is focused on Kroger’s experiments in high-service fresh, the retailer is quietly expanding a nascent limited service, hard discount box.

Ruler Foods resembles hard discounters like Aldi, incorporating similar strategies to reduce costs and increase efficiency such as coin-released shopping carts, a limited assortment of private label products displayed in their shipping cases, and no service departments like butchers, delis, bakeries, gasoline or pharmacy. Shoppers must provide their own bags or buy them at checkout.

As it is doing with fresh concepts like the newly opened Main & Vine, Kroger is taking a deliberate approach to Ruler Foods as officials work to understand the economics behind the box.

“On Ruler, we're still trying to understand the economics of the model to get to where it actually performs at an ROIC that we're happy with,” Rodney McMullen, Kroger’s CEO, said during an earnings call last month. “We continue to make progress, but we do not think we've figured it out.”

Ruler dates back to Kroger’s acquisition of the John C. Groub Co. in 1998. That company, known best for its Jay C stores in rural Indiana, operated a single Ruler Foods location then. More than a decade later Kroger began expanding the concept at other Jay C sites and then to other states.

Kroger views Ruler as a vehicle to target specific shopper group and in that sense plays toward a trend of food retailers customizing stores for particular shoppers.

“We have a tremendous amount of respect for Aldi and Lidl,” he said. “We've spent as much time in Lidl stores as we have Aldi stores over the years, and Lidl has done a great job when you look at a lot of the European countries. So we have a lot of respect for those formats. There are certain customers that we believe likes to shop in that environment. Everything that we can tell, it's not all customers. It is a customer segment, and what we're trying to do is to serve that segment.”

The 10 new Ruler locations are among 100 major projects including new stores, expansions and relocations planned this fiscal year by Kroger, along with 220 major remodels. Kroger expects capital investments, excluding mergers, to total $4.1 to $4.4 billion. Kroger spent around $3.3 billion on capital investments in fiscal 2015.