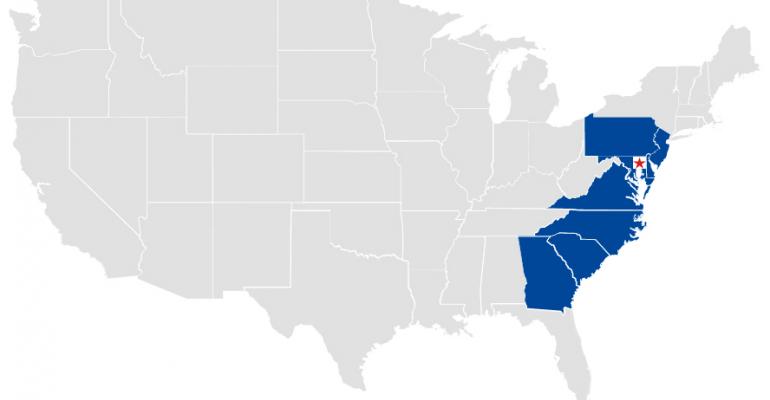 In further preparation for its 2018 U.S. store launch, Lidl US on Tuesday said it would build a third U.S. regional headquarters and distribution center in Cecil County, Md.

The company, a division of Germany-based Schwarz Group, said it would invest $100 million in the project and create 100 new full-time jobs at the facility over the next three years. Lidl plans to open its first stores in the U.S. no later than 2018.

Lidl previously announced warehouses would be constructed in Fredericksburg, Va., and in Mebane, N.C. Its U.S. headquarters are located in Arlington, Va.

“We are proud that a growing global company like Lidl chose Maryland as its gateway to the U.S. market,” Maryland Gov. Larry Hogan said in a release. “One of Lidl’s key guiding principles is providing its customers with outstanding quality at the best price. Maryland shares Lidl’s philosophy when it comes to customer service, and we are committed to attracting more companies like Lidl so that we can continue to provide Marylanders with excellent job opportunities.”

Lidl operates about 10,000 stores in 27 countries throughout Europe, where it is a considered a competitor to the limited assortment discounter Aldi. As previously reported, Lidl's planned U.S. stores of 36,000 square feet would be considerably larger than Aldi. Sources expect Lidl will open upwards of 100 stores between New Jersey and Georgia.

“We are excited to announce a new hub of operations for Lidl US in Maryland,” Brendan Proctor, president and CEO of Lidl US, said. “This facility is an important step in building an efficient infrastructure that will allow us to deliver outstanding quality goods to our customers at the lowest possible prices. We selected Cecil County not only because it offers a central location for our distribution network, but also because it will be a great place for our employees to work and live."

To assist with project costs, the Maryland Department of Commerce has approved a $360,000 conditional loan through the Maryland Economic Development Assistance Authority and Fund. Additionally, the Cecil County Office of Economic Development is providing a $20,000 Workforce Training Partnership grant and a $16,000 conditional loan based on the projected job creation goals. The company is also eligible for various tax credits including Maryland’s Job Creation Tax Credit and Enterprise Zones Property Tax Credit.

“Lidl selected Cecil County as the home for their regional hub in a highly competitive market,” said Lisa Webb, Cecil County director of economic development. “That speaks highly of the opportunity that Cecil offers in gaining international attention, encouraging investment, and providing quality jobs to our community. We couldn't be more pleased.”