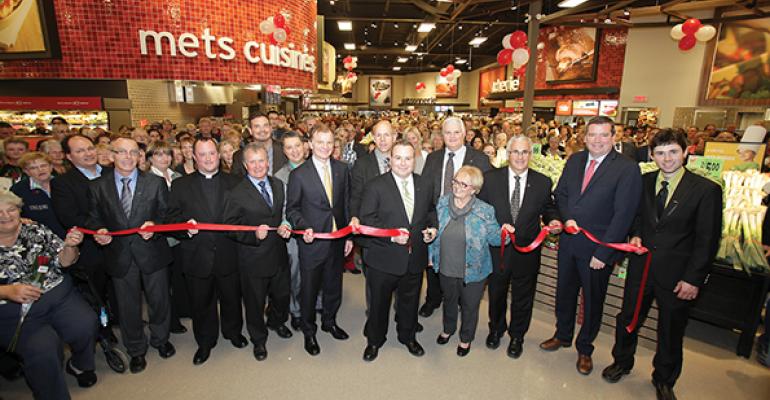 <p>Metro Plus is open for business in downtown Lac-M&eacute;gantic, where a train derailment last year killed 47 people and devastated much of the town.</p>
News>Store Design & Construction

A new Metro Plus store opened Thursday in Lac-Mégantic — the first new business to open there since much of the Quebec town was devastated by a train derailment and subsequent explosion 15 months ago.

The supermarket is the first business to open in the new centralized downtown core located in the Fatima district. Metro, based in Montreal, said it invested $12 million in the project, which will be served by approximately 125 employees, including roughly 85 from the former store on rue Frontenac.

The former store was closed following the July 2013 tanker train derailment that destroyed and contaminated a large swath of the former downtown. Forty-seven people were killed in the accident.

"For us, it was essential that we continue serving the Lac-Mégantic community and open as quickly as possible. That is why we joined forces with the city to build the new commercial hub in the Fatima district," Christian Bourbonnière, SVP of Metro’s Québec division, said. "I would like to underscore the collaborative efforts of Ville de Lac-Mégantic, as well as those of the numerous stakeholders who played a vital role in bringing this project to fruition."

"The opening of Metro Plus Centre-ville is symbolic for the entire Lac-Mégantic community. For us, it means reconnecting with both our employees and our customers," added Philippe Valiquette, senior partner at Metro Plus. "Over the past 15 months, not a day has gone by that I haven't been asked when we would reopen. Now I can finally say, ‘It's mission accomplished.’”

Among other features, the location is home to a sushi counter, a bistro, a meat department complete with a butcher, an in-store chef who will be preparing ready-to-serve meals, and a new fruit and vegetable concept. This will allow for a wider variety of products and enhanced freshness, not to mention a broader assortment of product categories due to the more spacious layout of the new premises.