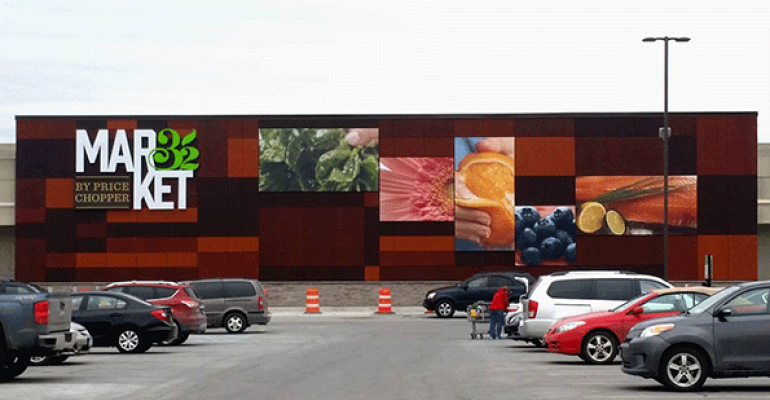 Price Chopper’s Market 32 rebranding has reached the storefront of one of its first converted locations. The Wilton, N.Y., store, formerly known as Price Chopper, unveiled a new facade bearing the Market 32 brand name, while the conversion continues inside.

Schenectady, N.Y.-based Golub Corp. late last year revealed plans to retire the Price Chopper banner in favor of the Market 32 name in all of its new and remodeled stores. In addition to the Wilton location, the company has ongoing conversions at Price Chopper stores in Clifton, N.Y., and Pittsfield, Mass., and is building a new Market 32 from the ground up in Sutton, Mass., targeted for a summer opening.

The final touches are up! Check out our Wilton, NY store front.

According to a posting on the Market 32 website, the Wilton store is continuing to undergo interior changes including a temporary relocation of the dairy department this week allowing for construction. Changes already complete at the store include a new growler station in the beer aisle and a frozen food reset. The company expects the seafood department and a Starbucks café to open shortly, while construction continues on a pharmacy drive-through and a food court.

Price Chopper officials said Market 32 builds on learnings from its foodservice-oriented Market Bistro concept, and will include expanded foodservice options, an enhanced product mix and a new emphasis on customer service.