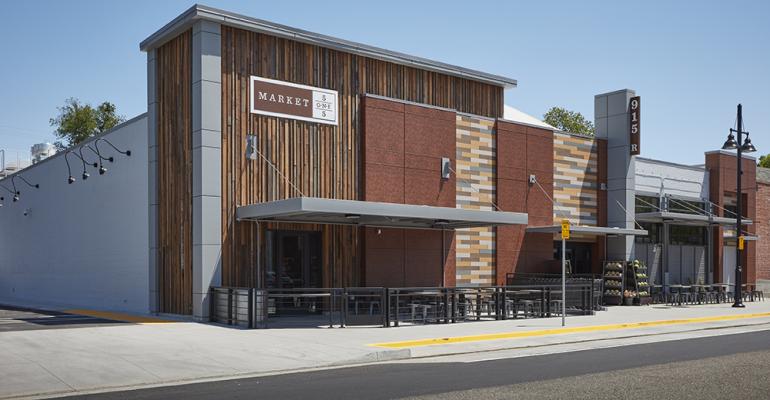 Located in the city’s historic R Street District, the 11,000-square-foot store caters to consumers who seek healthier fare and want more details about the food they eat — and who are frustrated trying to decipher food labels and translate ingredient lists. In fact, its mantra of “organic, nutrition and education,” or ONE, is reflected in the Market 5-ONE-5 banner.

Products sold at Market 5-ONE-5, which held its grand opening yesterday, are minimally processed, organic, sustainably sourced and free of ingredients not found in nature. This is in line with the preferences of many consumers, the retailer said, citing Pew Research Center findings that nearly 75% of Americans think organic food is healthier and 72% weigh price when deciding to buy organic versus non-organic food. “Market 5-ONE-5, and what it stands for, has been a vision of ours for a long time,” explained Michael Teel, chairman and chief executive officer of Raley’s, owner of Market 5-ONE-5, which is part of West Sacramento, Calif.-based Raley’s but is managed independently. “Its purpose is to offer our community access to fresh, nutritious and affordable food. Its mission is to help people live healthy, vital lives by taking the guesswork out of understanding nutrition.”

Described as “reminiscent of a neighborhood market,” Market 5-ONE-5 offers full grocery shopping — with an emphasis on fresh items — as well as eating and socializing, including wine by the glass; beer and kombucha on tap; and a coffee, tea and juice bar. The store also serves up seasonally prepared cuisine for on-site dining, including indoor and outdoor seating. Customers also can have food delivered to their homes, and catering services are available to local businesses in Sacramento.

In providing more transparency about its products, and to better educate customers, Market 5-ONE-5 said the store will have experts on hand to offer guidance and share their knowledge of food and nutrition. They include chefs, foodies, urban farmers, nutritionists and a registered dietitian.

That goes toward helping simplify the shopping experience for the 78% of Americans who say they find a lot of conflicting information about what to eat or avoid, the retailer said, referring to a survey from the International Food Information Council Foundation.

“Market 5-ONE-5 is about conviction to a core set of principles,” stated Raley’s President Keith Knopf, who is providing strategic direction for the concept. “We don’t stock products we don’t believe in, so customers can trust everything on the shelves. Our team members know exactly where our products come from, what is in them and how they were produced.”

Expansion of the Market 5-ONE-5 already is being explored. While there are no definite plans at this time, additional sites in other urban markets across Northern California are being evaluated, Raley’s Spokeswoman Chelsea Minor said.

Overall, Raley’s has 122 stores in California and Nevada under the Raley’s, Bel Air Market, Nob Hill Foods and Food Source banners. The company also recently acquired six stores in northern Nevada from Scolari’s Food and Drug. Five Scolari’s locations are slated to be converted to the Raley’s banner and one Sak ‘N Save store is set to retain its name and become part of Raley’s Food Source division