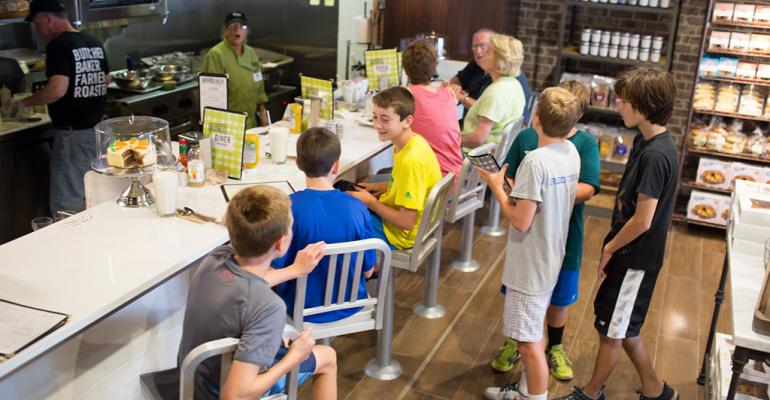 Roche Bros.’ Brothers Marketplace store in Medfield, Mass., was awarded a commendation for best retail store design of 2015 as part of the International Council of Shopping Centers’ annual U.S. Design and Development Awards.

The ICSC, a trade group representing retail real estate developers, awarded the honor earlier this month at an event in Phoenix. The awards recognize “excellence, innovation and creativity” in the industry.

Situated in the quaint neighborhood of a Boston suburb, the winning design for Brothers Marketplace acts as a prototype for extending the existing brand’s DNA into a fresh customer journey, according to design firm BHDP Architecture.

The modern aesthetic of the new design emphasizes warmth, familiarity and craftsmanship while also paying homage to the legacy of a beloved Lord’s department store that once occupied the space. Hallmark elements like a retro style diner and a mural of the original Lord’s store offer a nostalgic nod while a concentration on locally sourced foods and products distinguish the shopping destination from other, standard large-format supermarkets, the firm said.

“It is great to see this beautiful project receive the recognition it deserves. Working with Brothers Marketplace was a dream come true for our team and we are thrilled to have crafted such a rich experience for their beloved patrons,” Andrew McQuilkin, market leader for BHDP who accepted the award on behalf of the firm, said in a statement.

The ICSC selected Brothers Marketplace for its demonstration of “outstanding redevelopment characteristics with a high degree of creativity and uniqueness.”

Other retail stores recognized by the group in this year’s contest included a Walmart in Portland, Ore., whose designers received “sustainable gold” recognition for a unique eco-roof design.