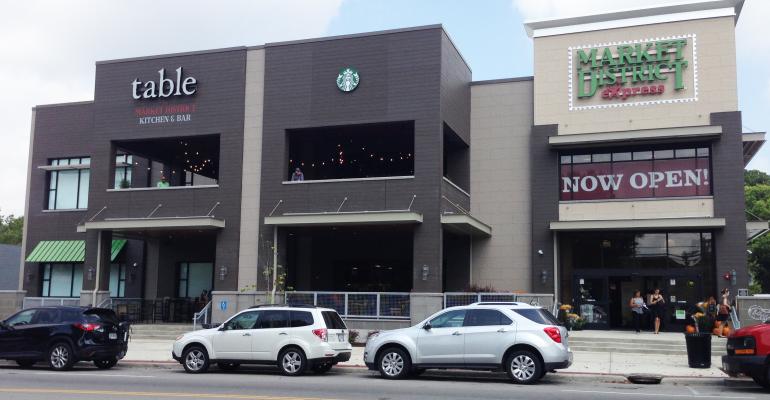 The store is the second under the Market District Express banner — a first opened in McMurray, Pa., nearly three years ago. The Bexley unit is about twice the size of the McMurray store at 30,000 square feet and is uniquely laid out on two levels to make use of a tight footprint on Main Street in Bexley, a tony suburb of Columbus that also includes the campus of Capital University, a college with some 3,500 students, within walking distance of the store.

"It's a beautiful store," Sandy Skrovan, a Columbus-based retail consultant and director of myRetailPOV.com, told SN. "They did a good job with the design. I anticipate the tailored assortment, mix of grocery staples, fresh/prepared foods and grab-and-go will well serve the surrounding urban-oriented 'walking' community, a mix of local residents and college students."

A unique feature of the store is a second-level, 155-seat restaurant and bar known as Table by Market District. The concept, which Giant Eagle debuted a year ago in a Carmel, Ind., Market District store, offers full-service lunch and dinner, and a menu inspired by fresh, seasonal ingredients and the Bexley community. Prices at Table range from $6 to $11 per plate, and the restaurant features what the company called "one of the most extensive beer and wine lists in Columbus," with 18 taps and 1,200 varieties of wine. Wines sell at the same price in the store plus a $10 corkage fee, the Pittsburgh-based retailer said.

According to Skrovan, Giant Eagle appears to have merchandised to the store to local tastes, with a large variety of prepared foods to go serving students, as well as a heavy mix of kosher items that should appeal to Bexley's large Jewish community.

According to Giant Eagle, selections reflect more than 20 local purveyors "ranging from pasta sauce to potato chips," sourced from within 150 miles of the store. The store employs 70 grocery employees and 40 in the restaurant. The store has service meat, seafood and deli departments, an in-store Starbucks, and offers online ordering with curbside delivery.

Skrovan said she felt the store compared favorably with full-scale Market District stores in the Columbus area that are more three times its size, but expressed some reservations about whether the unique layout and space constraints would facilitate full shopping trips at peak shopping times. "You could do your full shop there, you just don't have the variety and pack sizes that the larger stores do," she said.