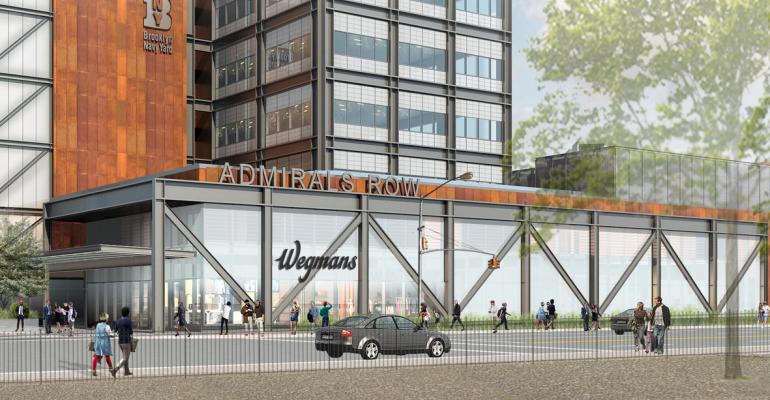 Wegmans
Wegmans is preparing to open at the Brooklyn Navy Yard, as seen in this rendering.
News>Store Design & Construction

Hiring gets under way for Brooklyn Navy Yard location

Wegmans said Monday that it has begun hiring and training for the 74,000-square-foot store, which is slated to anchor the $140 million redevelopment of the Admirals Row site in the Brooklyn Navy Yard. The Rochester, N.Y.-based grocer announced the project in May 2015.

Plans call for Wegmans to hire about 500 people for the Brooklyn store, including 150 full-time positions. The company said most employees will be hired locally. Full-time positions to be filled range from entry-level management and customer service to overnight grocery and culinary roles, such as chefs and line cooks. The chain also has started hiring for some part-time bakery and culinary positions and said it will begin filling other part-time roles at a later date.

Located on Flushing Avenue in Admirals Row, the Brooklyn Wegmans will feature a second-floor mezzanine with nearly 100 seats for the in-store café. That space also will include a bar that serves food, wine, beer and spirits.

The site is directly across from the 3,000-resident Farragut Houses and near the Ingersoll and Walt Whitman Houses and growing residential neighborhoods in Downtown Brooklyn, Fort Greene and Clinton Hill. Besides the Wegmans supermarket, the development will include 78,000 square feet of retail space, 126,000 square feet of light industrial space and 7,000 square feet of community facility space.

Wegmans’ Brooklyn store is one of three new locations — all in new markets — due to open this year, lifting the grocery chain over the 100-store mark. The company plans to open a 113,000-square-foot store in Virginia Beach, Va., on April 28 and a 100,000-square-foot store in Raleigh, N.C. No opening date has been announced yet for the Raleigh location.

The Raleigh store will expand Wegmans’ market area to seven states. The chain currently has 98 stores in New York, New Jersey, Pennsylvania, Maryland, Virginia and Massachusetts. Its most recent opening, a 120,000-square-foot store in Lancaster, Pa., came in late September.

Wegmans in late October announced a fifth planned location for North Carolina, in Wake Forest. Other stores slated for the state are in Cary, West Cary and Chapel Hill.