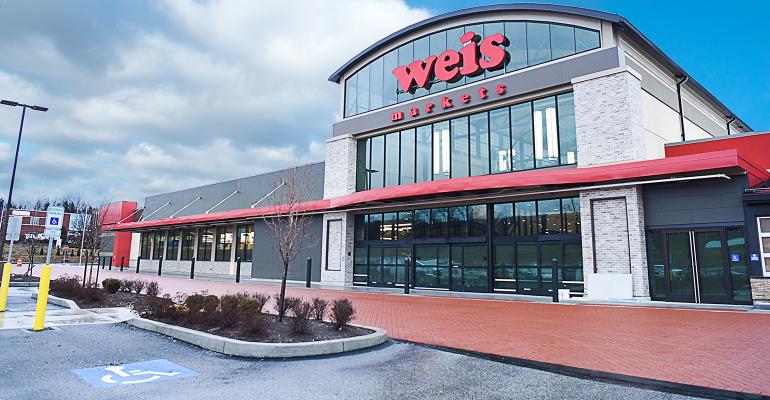 Weis Markets will unveil a new store prototype in Enola, Pa., this week with an eye to getting out of the “middle of the road,” its CEO said.

The 65,000-square-foot store, near Harrisburg, will debut what Weis is calling the “Community Market” design that will incorporate a number of service firsts for the Sunbury, Pa.-based retailer including its first in-store pub and ice-cream shop, juice bar and an expansive food court. New offerings also include a mix-and-match K-cup 12-pack program in center store.

According to remarks from CEO Jonathan Weis in a local report at PennLive.com, the store was designed to take service to the next level as a means to combat high-volume competitors like Ahold’s Giant-Carlisle brand, Wal-Mart Stores and Wegmans. “We are sort of a middle-of-the-road supermarket," Weis said in the article. "We always have one eye on pricing and we compete with massive, massive competitors such as Royal Ahold, Wal-Mart and Wegmans and others who do a tremendous volume. So that tempers our thinking. But, on the other hand, we have to be on trend. We want to be interesting, not boring or dull. We just have a philosophy that we're not going to be afraid to fail.”

The store features the company’s in-store pub with a rotating selection of draft beers and an adjoining café offering 900 varieties of beer and 500 varieties of wine.

The opposite side of the pub is an ice-cream parlor where customers can order floats and other treats featuring the company’s private-brand ice cream.

An expansive food court offers hand-rolled sushi made in store and a selection of fresh cooked meals including a grill counter, an Asian food wok station and Chobani-branded yogurt bar.

Other features will include a 1,900-item “store-within-store” featuring organic and gluten-free items; specialty items including premium vinegars and ketchups, rolls from Terranetti’s Italian Bakery, TorchBearer sauces, premium teas and coffees, kombucha and other high-end probiotic drinks and a holistic health product section.

The store includes a drive-thru pharmacy, a fuel center, and offers online ordering for in-store pick up, Weis said.

Officials said they intended to incorporate elements of the new prototype into existing stores.