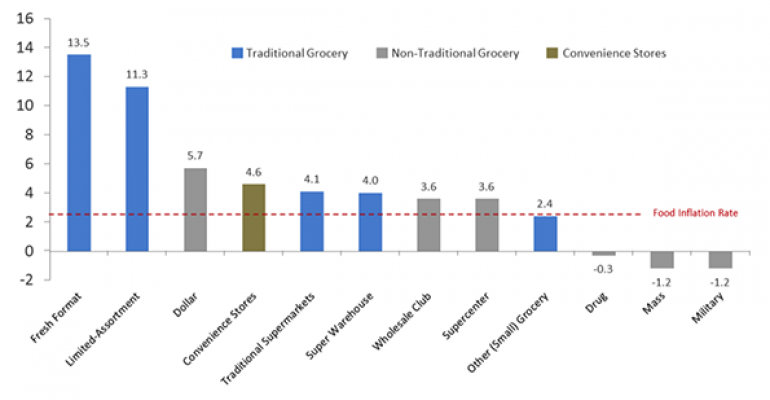 Channel migration is slowing as alternative channels mature. In 1988 the traditional grocery channel, led by traditional supermarket, still commanded the lion’s share of sales generated from grocery and consumable products. Since then, the channel has lost dollar share to the non-traditional grocery channel, which continues to be led by supercenter/mass and wholesale club stores. Astute manufacturers and non-traditional retailers quickly learned that selling food increased traffic and drove significant incremental volume through impulse and “fill-in” purchases.

While price and convenience, such as one-stop shopping, were the primary growth drivers for non-traditional grocery, the food retailing landscape is once again headed for dramatic shifts, this time largely within the traditional grocery channel.

As illustrated below, the fastest growing segments in food retailing (2014) included fresh format and limited assortment stores, which were up 13.5% and 11.3% respectively. Other traditional grocery segments grew as well, including traditional supermarkets (+4.1%) and super warehouse (+4%), each far exceeding the rate of food inflation. 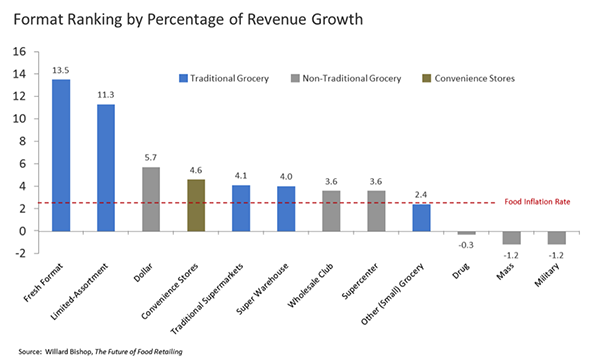 During the next five years, shoppers will level the playing field by spreading their purchases across multiple channels. However, regardless of channel, retailers will undoubtedly expand their focus on natural and organic products, while reducing the square footage allocated to the sales floor. In addition to opening new stores with less selling space, winning retailers are likely to retrofit existing stores into multi-functional store-hubs or storehouses. These multi-purpose locations will provide a localized assortment of products in the selling area, while reserving backroom square footage for safety stock, staging home deliveries, and for the fulfillment of click-and-collect orders.

How will CPG manufacturers adjust their go-to-market strategies in order to capitalize on these latest trends?