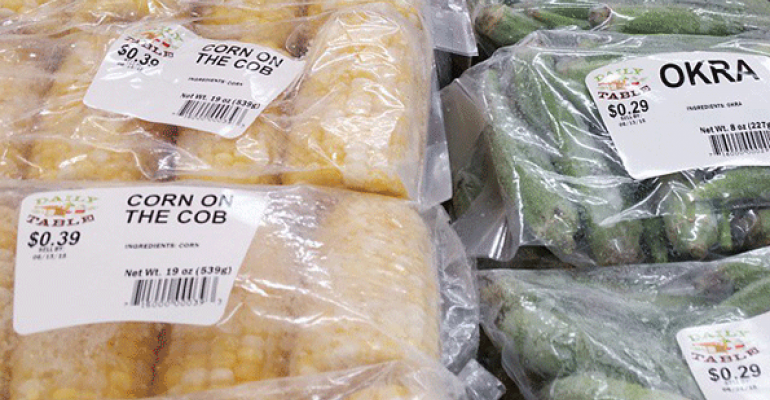 “Those prices are for real,” boasts the Facebook page of the Daily Table, a new not-for-profit supermarket slated to open this month in Dorchester, Mass.

Daily Table keeps prices low through food donations, as well by sourcing overstocks, blemished produce and food that is past the sell-by date printed on the package, but still safe to eat.

“We will only sell quality, nutritious and safe groceries that still have a reasonable window of use past their ‘display code,’” promotional materials read.

A snapshot of what you'll find in our freezer cases: fresh okra and corn on the cob, flash frozen and packed in our kitchen, ready to be used in yours. PS- those prices are for real! #affordablenutrition

Posted by Daily Table Dorchester on Thursday, May 28, 2015

A large volume of the store’s sales will be prepared meals.

“At this point, based on focus groups and extensive conversations in the community, we’ve heard that people are busy with little free time and would prefer to grab an already prepared meal,” according to the store’s website.

Select shelf-stable groceries will be available as well. For instance, Daily Table got a deal on raisin bran cereal flakes because the boxes had a sell-by date only a few months away, according to a story printed in The Boston Globe. The store may sell the cereal for a low 79 cents a box.  A can of tuna could go for 55 cents.

“We can offer these daily values by working with a large network of growers, supermarkets, manufacturers and other suppliers who donate their excess, healthy food to us, or provide us with special buying opportunities,” according to promotional materials.

The store will not sell soda, snacks or candy.

The store was set to open last month, but the date was postponed due to a permit delay. A store spokeswoman said the opening date was pushed back to this month, although an exact date has not been announced. It will be open seven days a week from 11 a.m. to 8 p.m.

Rauch hopes to open one or two more stores in Boston, as well as others in Los Angeles, New York, Detroit, San Francisco and Baton Rouge.

The Daily Table is membership-based. Membership is free, and given to those who provide their name, phone number, email and ZIP code.