While hourly wage hikes garnered most of the attention when Walmart announced its $2.7 billion, two-year investment in workers, the company made an effort to show off areas in which training and technology are aiding its future.

A series of regional Walmart Academies are opening near stores and a new career architecture known as Pathways incorporates new training and clear outlines for potential career paths for workers that could reduce costly turnover and accelerate development of employees to support faster growth.

2. Price action, efficiency on the horizon

With Walmart now in the back half of its two-year recalibration under CEO Doug McMillon, officials are talking again about leveraging these investments on multiple fronts — and, at long last, making something of them financially.

“We’re still pushing the ball up the hill — it’s not rolling down on its own yet,” McMillon confessed. “But some really encouraging things are happening.”

Key to all of it is getting sales moving again, a process officials expect will come once billions in price investments follow upon the improvements in stores.

Those pricing investments have only just begun — and the “smiley face” iconography is returning to remind us. “We haven’t been as sharp as we needed to be on price for the last few years,” Steve Bratspies, chief merchandising officer, said. “We had the price lead but it’s shrunk in certain areas more than we’d like. Our brand is about price leadership, and when we say ‘Save money to live better’ we mean it. So the onus is on us to deliver that.”

A demonstration of a drone capable of inventorying an entire warehouse in a single day is only the beginning of what could be massive sources of cost savings through technology.

Shekar Natarajan, who created the program for Walmart, acknowledged the drone could be deployed not just in a warehouse but theoretically in any building, and that inventory counting was but one capability for which that technology could be used. Stay tuned.

Walmart has made no secret of its ambition to marry stores and technology, with eyes on being just as significant in e-commerce as it is in physical retail as lines blur between those channels.

The point where they come together is online grocery. The company is hustling the service to dozens of new markets this year. It also said it intends to test the feasibility of using third-party companies like Uber and Lyft to handle delivery for the customers that want that.

Store pickup is also a top priority. A Supercenter prototype in Rogers, Ark., features an electronic kiosk located near the entrance where online shoppers can punch in their orders and receive them within minutes. The offering has been especially popular with shoppers obtaining new-release DVDs like the latest Star Wars movie, SVP Jane Ewing said.

Walmart’s ambition in food has never been more explicit, with newly launched Supercenter, Sam’s Club and Neighborhood Market prototypes each trying to make food their star.

A Culinary & Innovation Center opened near corporate headquarters with kitchen facilities, replica store-prep areas and a sensory lab for product sampling and testing.

"That’s a hard thing to imagine us doing a couple of years ago,” International CEO David Cheesewright remarked.

Private label products, brand exclusives and partnerships with suppliers worldwide are all being developed with an eye on cutting a more distinctive positioning in stores that until now differentiated themselves primarily on the basis of price on items you could buy anywhere.

While some of the new twists could be interpreted as merely keeping in step with the pace of change in food retail, it’s clear that Walmart intends to participate where the growth is.

Walmart’s new strategies are coming with the ambition to capture a wider swath of the market than it might once have.

A strategic reset at Sam’s Club is underway with a goal of providing “quality at a value” for wealthy shoppers CEO Roz Brewer said.

A revamped jewelry assortment at a Sam’s Club prototype has doubled the price of diamonds and cleared out opening-price-points in favor of five-figure items, said Cindy O’Connor, VP of home and apparel for Sam’s.

“We’re using this as a test to find out how high is high, and what can translate into the rest of our clubs,” O’Connor said.

As for Walmart, McMillon noted that the company needs to appeal to all economic classes, but acknowledged that investments in store service and online grocery tend to attract a wealthier shopper.

Walmart always endeavors to put on a show, and between the drones, three newly imagined stores and the new culinary center, there was plenty to show off this year. 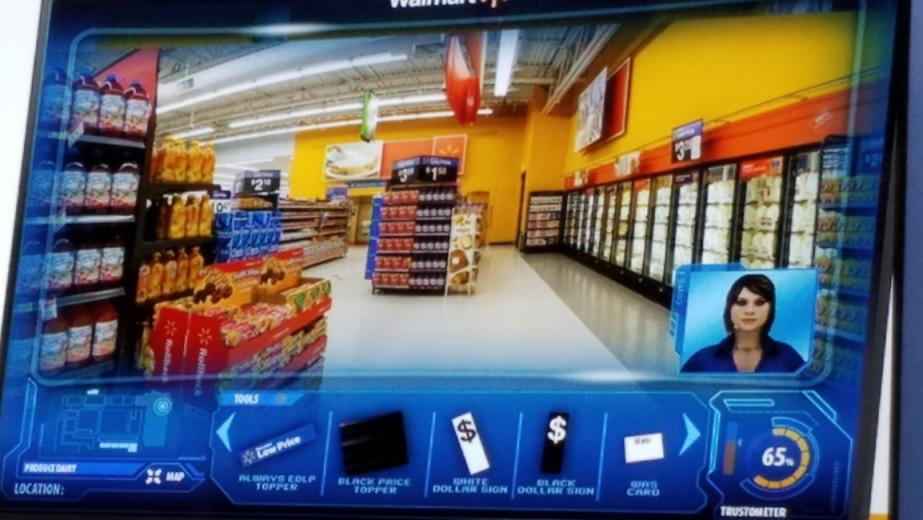 Next Up
Gallery: Inside Walmart’s Culinary Innovation Center
Start Slideshow ›