Whole Foods Market opened Tuesday in Brooklyn’s Williamsburg neighborhood, bringing along a host of local food vendors and establishing another destination for foodies in one of the city’s trendiest neighborhoods.

It is the second Whole Foods store to open in Brooklyn and the first in Williamsburg, which draws food enthusiasts from around the city to the weekly Smorgasburg food festival a few blocks away. A neighboring Apple Store also opened Tuesday.

A coffee and juice bar is the first thing shoppers encounter when entering the store from its entrance at Bedford and N. 4th streets.

Pizza makers and other prepared food vendors populate the WFM Food Hall. Grab-and-go foods, a café and checkout are also on the street level.

Sushi chefs at work in the WFM Food Hall.

An escalator leads shoppers down to the market level. On opening morning, some shoppers found it difficult to locate the way back up (psst, it’s in the corner by the bakery). And in the produce department, a sign highlights value pricing of 365 private brands.

A blue map icon identifies local items in the bakery, and in various departments throughout the store.

The N4 Taproom, referring to the address on North Fourth St., includes a variety of beers and a menu inspired by a Jewish delicatessen in a nod to Williamsburg’s heritage.

A butcher works on fresh cuts of meat while his next task is hanging around.

An Instacart shopper was busy preparing orders only minutes after the new store opened.

Once downtrodden, Williamsburg today draws wealthy young families creatives and foodies Wegmans has announced plans to build about a mile away.

A variety of produce and strategic lighting makes for a colorful presentation in produce.

Cosmetics merchandised along a backlit brick wall in the Whole Body section.

Brooklyn Brewery, which brews some of its product only blocks away, is highlighted in this display. If you want it cold there’s a 16-door cooler devoted to beer.

A customer grinds her own almond butter.

Greek-style yogurt in multiple pack sizes was among the special offers.

Anticipating crowds similar to those that inhabit the Union Square Whole Foods a few L train stops away, the store uses a color-coded queuing system to aid a faster checkout.

Cashiers at checkout. From here shoppers can ride an escalator to a parking garage or visit the café. 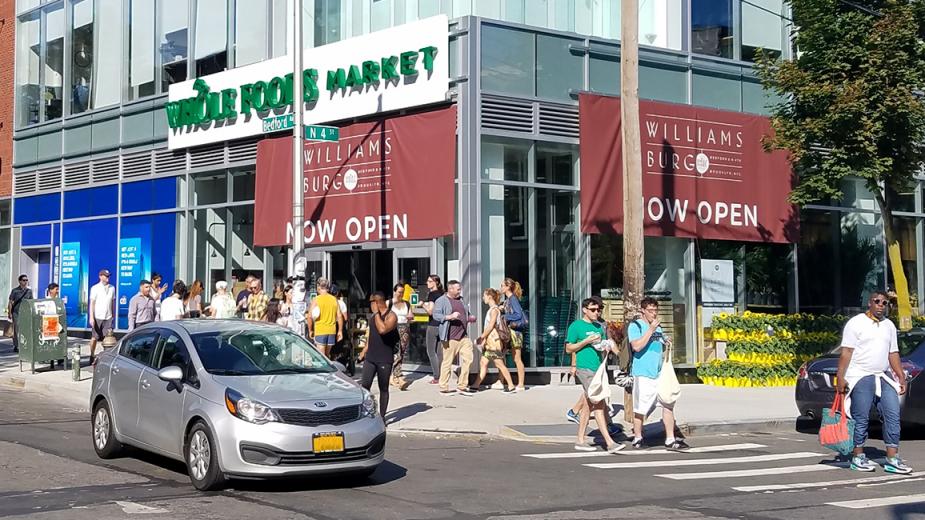