Independent food retailers from around the country gathered this week in St. Paul, Minn., for a chance to swap ideas and shop for deals as part of Supervalu's annual Expo.

The event drew more than 4,200 attendees, officials of the Minneapolis-based wholesaler said. They hit a show floor where vendors offered a variety of so-called "Monster Deals" offered only at the show, as well as auction deals in which vendors offered lower prices based on collective retailer demand.

Tom Jamieson (left) of Jamieson Family Markets, Uniontown, Pa., said he took advantage of “phenomenal deals” available at the show and participated with fellow Shop n’ Save owners on group deals. Meanwhile, Bonnie Kemp (right), marketing manager of Niemann Foods, Quincy, Ill., picked up a Master Marketer award for an advertising campaign promoting the debut of ValuCheck, a new “cost-plus” format the retailer opened in May in Pekin, Ill.

"Our No. 1 objective here is education,” said Scott Karns, owner of Mechanicsville, Pa.-based Karns Foods. "The other thing we come for is deals for our customers.” Karns was a winner of Supervalu’s Master Marketer award and took home a $25,000 check, which will be donated to local charities.

IGA president and CEO Mark Betanic (right) said more than 130 IGA independent retailers were at the show. Supervalu officials said they are adding new private label items this year at a rate of more than one per day.

Supervalu officials are excited by new private label items in the gourmet Culinary Circle line. These new frozen pizzas are expected be on store shelves by October.

Monster signs signaled attendees to special deals available only at the show, and vendors set loose a number of costumed characters on the floor including Twinkie the Kid, the Quik rabbit and this guy.

Take it to go

A display featured boxed meal ingredient kits designed to appeal to shoppers on the go and head off competition from Internet-based specialty suppliers. 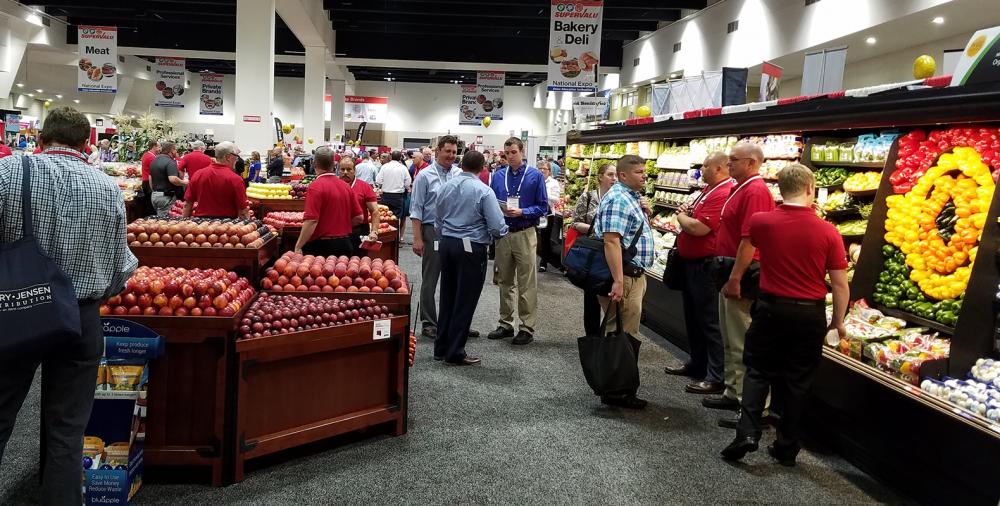