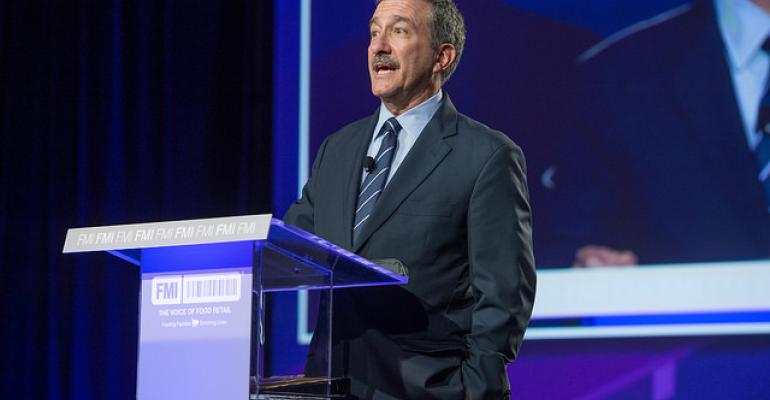 Food Marketing Institute has named Gary Rodkin, CEO of ConAgra Foods and chairman of Grocery Manufacturers Association, as winner of the William H. Albers Award, which recognizes a leading supplier who has made a significant contribution toward improving distributor-supplier relations.

The award was presented Saturday during FMI’s Midwinter Executive Conference in Miami.

FMI said Rodkin was instrumental, in his role as GMA chairman, in developing the FMI-GMA Trading Partner Alliance, a joint-industry working group aimed at streamlining business efficiencies along the supply chain, and was also integral to helping the industry launch Facts Up Front, a nutrition guidance program designed to help consumers make more informed decisions.

“Gary embodies the ideal qualities in a business partner, and he’s ultimately focused on serving the end consumer,” Leslie G. Sarasin, FMI president and CEO, said. “He never loses sight of how he’s going to work with his retail business partner to deliver on a promise to the shopper.”

Rodkin, who joined ConAgra in late 2005, is a former chairman and CEO of PepsiCo Beverages and Foods North America and also served as president of Tropicana from 1995 until Pepsi acquired it in 1998.

In a testimonial video shown at the awards presentation, Rick Lenny, chairman of IRI and former chairman and CEO of The Hershey Co., said Rodkin’s success across multiple companies “can be defined by the three C’s: company-first mindset, consumer-driven and customer-focused.”

The Albers award, presented since 1955, is named after the first chairman of Super Market Institute, FMI’s predecessor organization, who founded and presided over Albers Super Markets, Dayton Ohio, from 1930 until he died in 1954.