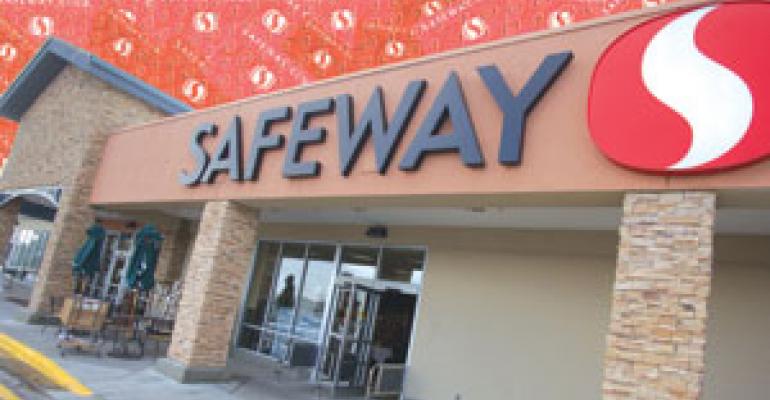 In discussing Safeway's recent financial success, Steve Burd, its chairman, president and chief executive officer, speaks about the chain's adoption of a format, its development of proprietary lines of natural and organic products and a premium line of perishables, among other initiatives. He rarely alludes to what role, if any, technology has played in the chain's turnaround. Yet technology especially

In discussing Safeway's recent financial success, Steve Burd, its chairman, president and chief executive officer, speaks about the chain's adoption of a “lifestyle” format, its development of proprietary lines of natural and organic products and a premium line of perishables, among other initiatives. He rarely alludes to what role, if any, technology has played in the chain's turnaround.

Yet technology — especially the use of customer data — appears to be a key ingredient in Safeway's go-to-market strategy, according to a number of industry observers. (Safeway declined to be interviewed for this article.) Like fellow grocery giant Kroger, Safeway, sources say, is putting a great deal of effort into gathering intelligence on its customers and leveraging that information to provide the right products and shopping experience.

Thomas D. Murphy, president of Peak Tech Consulting, a retail technology consultancy based in Colorado Springs, considers Safeway, Kroger and their newest competitor, Tesco, to be the best practitioners of what he calls “Molecular Management.” That is a style of management that uses “real-time or near-real-time data” to support marketing, inventory, pricing and other decisions, he said during a conference call in October hosted by Citigroup, New York.

“Those three retailers have learned how to use data,” Murphy, who was vice president of IT for Kroger from November 1993 to January 2000, told SN.

In Safeway's case, he said, data gleaned from its loyalty card program “served as a basis for decision-making around the implementation of their lifestyle store format — an example of assortment management and store layout being data-driven.” As of last month, Safeway had converted 1,000 stores to the lifestyle format, nearly 60% of its 1,738-store base. These stores are designed to reflect contemporary lifestyles, emphasizing top-quality perishables, a line of proprietary items and a stimulating ambience.

In the lifestyle stores, Safeway is generally going after a “middle-to-upscale shopper who is slightly price-sensitive,” Murphy said. But within each market and even down to the store level, Safeway is using customer data to tweak product assortments to meet more local tastes. “They're doing a great job of zeroing in on who their real customer is,” he said.

In a Greek neighborhood in Phoenix, for example, Murphy has observed a salad bar with a huge olive selection “that does not exist in another Safeway two miles away.” A store located near a hospital offers a robust floral department near the entrance, he noted. “I'm always amazed at how much their stores fit the neighborhood.”

Safeway also uses loyalty card data to market directly to shoppers. In its Safeway Club Card application, it says the company “may use [purchase information] to provide you with personally tailored coupons.”

Shoppers can also earn air miles on the United Airlines Mileage Plus program with their card, as well as store discounts.

In addition to loyalty data, Safeway uses customer panels to gather insights on their preferences, according to a new report, “Why advocacy matters to grocers,” from IBM, Armonk, N.Y. For example, Safeway “adjusts produce assortments according to customers' preferred sweetness of grapes or crispness of apples,” the report says.

To ensure that customer insights are an ongoing part of its business, a group of Safeway executives is responsible for communicating regularly with shoppers.

Information Resources Inc., Chicago, is another source of data used by Safeway. “They use our data and their own frequent-shopper data to understand customer categories and customer segments and really begin to market to those people differently,” said Thom Blischok, president of IRI Retail. “They are clustering stores around shopper segments,” such as “quick trip/convenience shop” and “stock-up” orientations.

Safeway is also collaborating with manufacturers to enhance its knowledge of consumers, said Blischok. In particular, the retailer has developed a category management program called “Optura” aimed at fostering closer collaboration between Safeway and its suppliers to improve the customer experience.

“[Safeway has] a vision that says we're going to change the relationship from buy-sell to one focused on how we're going to serve customers individually in stores better,” said Blischok. “They're trying to link themselves and manufacturers together to understand behaviors of shoppers on an ongoing basis, which will change what goes on the shelf, what goes in the local store and will bring a different value equation to the shopper.”

Through this initiative, Blischok added, shoppers will be able to “buy what they want to buy and not have to go through the clutter of category confusion.”

An industry stock analyst, who requested that his name and company not be used, said Safeway launched Optura around June and would be rolling out pieces of it over the next few years. The focus of the program, he said, is Center Store, which was not the initial focus of the lifestyle stores.

The goal of the Optura program “is to share with suppliers a lot of the customer information they've been digging up to guide assortments, prices and promotions,” the analyst said. The data-sharing process would take place, for example, during category business planning sessions. “Safeway will provide customer segmentation data and ask suppliers for input on how their products and promotions fit into that.”

About 80% of Safeway's suppliers “should have their own proprietary customer research to match up with [Safeway's data],” the analyst said.

Safeway has historically been known to pursue partnerships with its vendors, far more than Kroger and Wal-Mart, Peak Tech's Murphy noted.

Safeway relies on a variety of technologies to manage its customer data, including a data warehouse from Teradata, of Dayton, Ohio.

For the past two years, Safeway has leveraged customer sales and other data to determine optimal prices across its store base, using price and promotion optimization software from DemandTec, San Carlos, Calif.

According to DemandTec, its price optimization system analyzes a combination of factors, including historical POS data, competitive prices, seasonality, price elasticity and cannibalization effects, to come up with recommended prices. The recommendations are also based on an overall end goal, whether it be growing revenue, profits, unit sales or customer count. Retailers generally establish price zones for clusters of stores.

The system not only recommends prices, but also forecasts the impact of those prices on revenues, profits and unit sales, according to DemandTec.

DemandTec's promotion optimization system allows Safeway to assess a manufacturer's promotional offer, not only by how much it drives sales and profits for a particular item, but for the category as a whole, including cannibalization effects on related items.

All of Safeway's manufacturers submit trade promotions electronically to the retailer via the Web-based eDeals system, replacing a paper-based process. The system captures all records of a promotional allowance — and the negotiations associated with it — for auditing and Sarbanes-Oxley compliance.

To ensure that vendors' promotions are deployed at individual stores, and that other tasks are carried out, Safeway is using a task management system from Tomax, Salt Lake City, according to Murphy. (Tomax did not respond to a request for comment.) Safeway is also using Tomax's labor scheduling system, he added. Both systems are managed centrally from Safeway's headquarters, though stores are able to modify schedules based on particular requirements.

The task management system could assign an employee with “building an endcap display on aisle six,” said Murphy. “The employee or his manager has to verify that the work has been done, and if there is a missing part to the display, they can note that.”

One of the more unusual pieces of technology used by Safeway is a POS device designed to protect the privacy and security of shoppers with visual impairments. The device, which Safeway began installing in February, plugs into existing POS terminals and has tactile keys arranged like a standard telephone keypad. It allows shoppers who have difficulty reading information on a touchscreen to privately enter their PIN, telephone number and other confidential information. Safeway expects to finish installing the device chainwide early next year.

Safeway also has a robust online shopping service, GroceryWorks, on its website, safeway.com. Safeway purchased the balance of the equity in GroceryWorks from Tesco and a private equity firm a year ago.