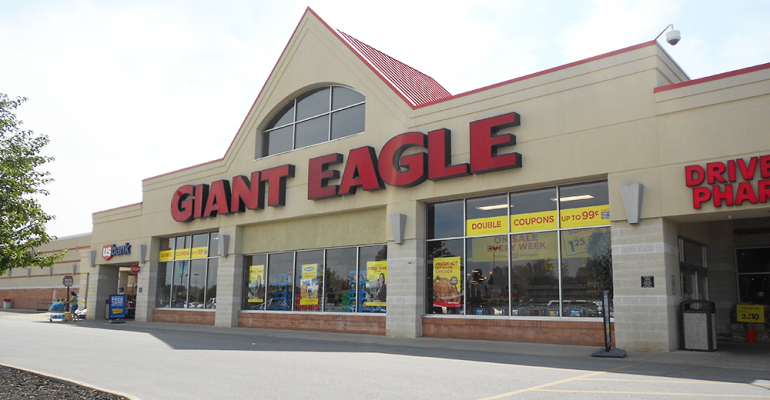 Giant Eagle
Giant Eagle had been testing the Flashfood app, which lets customers shop near-expired products at a big savings, in more than 30 stores before rolling it out.
Issues & Trends>Sustainability

Regional grocer Giant Eagle is rolling out the Flashfood food waste reduction program to all of its supermarket locations.

Toronto-based Flashfood said Tuesday that the 140-store deployment will bring its eponymous app first to the Cleveland area and then to all 173 corporate Giant Eagle and Giant Eagle Market District stores in Ohio and Pennsylvania by the end of October.

The free Flashfood app gives shoppers access to exclusive deals on products — including meat, produce, seafood, dairy, deli and bakery — that are nearing their best-by date. In turn, the significantly reduced prices drive purchases of food that otherwise would go to the retailer’s waste stream.

Giant Eagle, based in Pittsburgh, first introduced Flashfood at 34 store locations in 2021. Since then, the program has diverted more than 430,000 pounds of food waste from reaching landfills, Flashfood reported, adding that the reduction translates to nearly 159,102 meals that fed families instead of being discard and about 834,335 pounds of carbon emissions saved from entering the atmosphere.

“Our partnership with Flashfood has not only helped us in our mission to reduce food waste, but it has helped us better serve our guests and their families by offering more value-focused grocery options,” Giant Eagle spokesman Dan Donovan said in a statement. “With the success we’ve seen so far, it was a natural next step to expand the program to all our corporate supermarket locations to offer more guests access to this savings opportunity while making an even bigger impact on the environment.”

Flashfood’s app enables grocery customers to browse deals at participating stores on foods that are approaching expiration, including center-store and snack items as well as perishables. Purchases are made directly through the app, and customers pick up their order on the same day from the designated “Flashfood zone” area inside the store. Items purchased are stored in a refrigerator or on a storage rack inside a Giant Eagle or Market District store until they’re retrieved by customers.

Shoppers who regularly use the program save an average of $96 per month on grocery bills, Flashfood said. Giant Eagle customers can find a Flashfood location at flashfood.com/locations/home.

“Our expanded partnership with Giant Eagle couldn’t come at a more critical time,” according to Josh Domingues, founder and CEO of Flashfood. “With inflation causing grocery prices to soar, the 140-store expansion will increase our ability to feed more families affordably and reduce the amount of food reaching the landfill fourfold. It is a big win for both Ohio and Pennsylvania shoppers and the planet.”