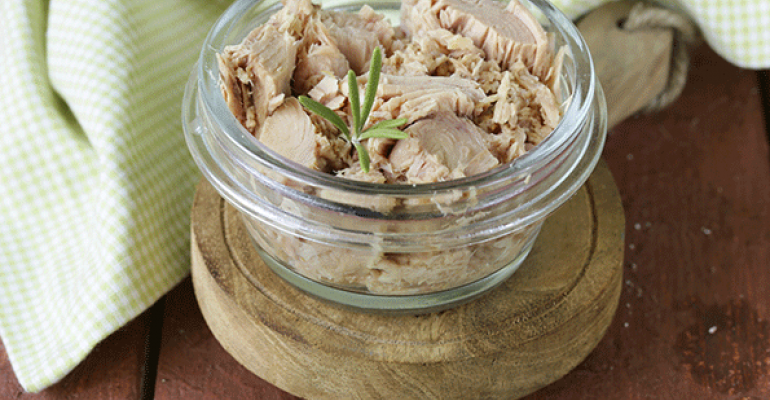 &ldquo;Each of these companies is tackling a problem in a pretty creative and innovative way.&rdquo; &mdash;CARLOTTA MAST, New Hope

Exhibitors at the Expo West show in Anaheim, Calif., were eligible for Editors' Choice or Popular Vote awards in food and beverage; ingredients and supplements; or beauty and natural living categories.

The editors at New Hope Natural Media, which produces the show (and shares a parent company with SN), set out to select a single Editors' Choice award-winning food or beverage, but were so impressed with a particular trio of companies, they decided to give the award to all three. They are Community Seafood, Fishpeople and Safe Catch.

“They are all positioned around providing greater transparency and traceability in the seafood industry, which, as you know, is very needed,” said Carlotta Mast, executive director of content and insights at New Hope. “Each of these companies is tackling a problem in a pretty creative and innovative way.”

Indeed, Community Seafood is a community-supported fishery, which according to New Hope's editors, acts much like a CSA.

“The company recently launched a frozen artisanal fish business that will make fresh-frozen, traceable seafood available in retailers’ freezers,” according to a product description given by New Hope’s editors in a winner's photo gallery. “Consumers can scan the QR code on the front of the package to be introduced to the Southern California fisherman responsible for their catch.”

Fishpeople, which markets pouches of seafood-based chowder, bisques and sauces, also offers a traceable product. Its packaging features a traceability code that helps clue consumers into the source of their meals’ fish, shellfish, mollusks and other ingredients, according to New Hope.

Visitors who enter their product’s code at fishpeopleseafood.com, might be met with the following message: “The Albacore Tuna in your pouch took a long swim across the Pacific Ocean to be pole caught by one of two Fishing Vessels (F/V). The F/V Valor III is captained by Dan Glissendorf and he docks the fish in Newport. The F/V Sundancer is a new business by two young brothers – Mike & Tim Quandt. Mike is the fisherman and Tim is a refrigeration expert, together they set the standard for quality Albacore.”

Winner Safe Catch also emphasizes transparency with its tuna. In an effort to combat the issue of mercury contamination in wild tuna, every fish that is caught by the company is mercury tested and held to standards that are stricter than that of the FDA’s safe mercury limit, according to New Hope.

The winning companies were among 84 nominees selected across the three award categories by the editors at New Hope, who, along with representatives from brand marketing firm Sterling-Rice Group, reviewed thousands of products on the Expo West show floor in March.

“It’s a huge undertaking but we feel like we’re in a really great position to not only identify those standout products, but understand why different brands and different products really are truly demonstrating creative thinking and execution and are not just another me-to product,” said Mast. “There are a lot of those and we just have the historical understanding of what’s been going on the market and what’s is truly new.”

When a company is nominated at the show, they’re given signage to post in their booth for the remainder of the show, to let attendees know they’ve been nominated for an award. Nominated companies are also featured in a photo gallery on newhope360.com. Gallery visitors are urged to vote for their favorites.

“The companies that are nominated are encouraged to have their own community and their own fan bases and customers vote for them,” Mast explained.

The food or beverage company that garnered the most votes in the food and beverage category was Kaslo Sourdough, “a soy-, nut- and dairy-free pasta with one-of-a-kind flavor and all of the gut-friendly attributes of naturally fermented foods,” according to the New Hope editors.

Taking the No. 2 spot as Popular Vote runner-up is Back to the Roots, “a USDA Organic stoneground wheat cereal (and a line of cereal toppers to go with), that combines simple ingredients and resourceful packaging to bring something truly new to the cereal aisle,” New Hope’s editors said.

The NEXTY award winners in the supplements and ingredients category are:

While the winning products aren’t necessarily widely distributed or carried in mainstream grocery channels, they are relevant to the future of food retail, noted Mast.

“Everyone wants to know what the trends are in food and where is the innovation, and there are so many more entrepreneurial companies launching pretty innovative products and brands and this is a snapshot into [what will be] new in products and brands in grocery down the road,” she said. “When you look at all the nominees you can align them with these really important trends happening in food, beverage, nutrition and other types of products.”

The winning companies will be profiled in the 2016 Next Forecast report, which publishes this month. Companies will also be recognized in an awards ceremony at Natural Products Expo East.