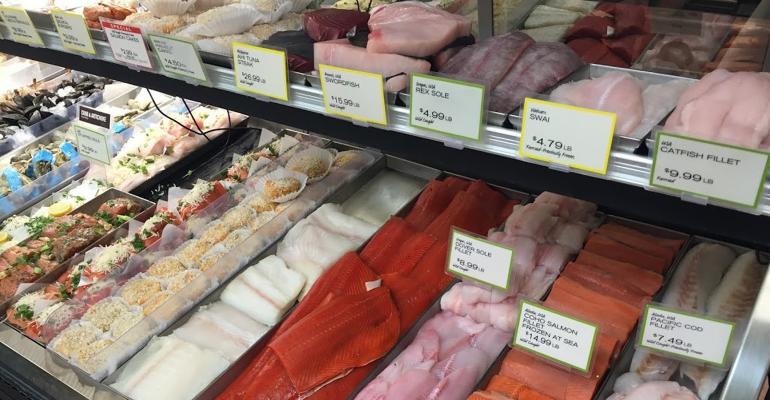 Turning ‘trash’ to treasure in the seafood case

Between the increasing awareness of food waste and the more adventuresome palates of the consumer lies an ocean of opportunity for retailers with the nerve to dive in.

Though primarily a trend in foodservice, some supermarket retailers have begun offering and selling so-called “trash fish” — a term for those species by-caught by fisherman going after more popular varieties.

These fish, which might once have been discarded, today are turning into featured dishes by restaurant chefs embracing the sustainability benefits — and at times, the culinary challenges — of championing species that might be new or unusual. And in a supermarket environment that in recent years has embraced “ugly produce” in service of consumers increasingly concerned over food waste and food budgets, it’s an area of opportunity, if not yet in widespread adoption, sources said.

New Seasons Market’s seafood buyers make a point to acquire available varieties from its suppliers as a means of supporting the chain’s overall commitment to sustainability, said Daisy Berg, seafood program and category manager for the 19-store, Portland, Ore.-based chain.

Berg points to the success of Rex sole at New Seasons, a flounder variety caught in Pacific waters. Rex sole are small, bottom-feeding fish with lots of bones, but can be quite tasty, Berg said. At New Seasons, their main attraction is the price: often, it’s the least expensive fresh fish in the case.

Berg said the store is careful not to use the term “trash fish” in marketing the offering. Instead, store salespeople instead tell a sustainability story.

“What typically happens in our stores is that consumers will see a variety that’s not as expensive, and because of the price they’ll ask about it,” she said. “That’s where our staff can take over, say this fish is really tasty, here’s where it came from and here’s how to prepare it.”

Berg said New Seasons occasionally takes additional varieties of unusual fish from suppliers, but noted the value of offering a consistent variety tends to limit how much it can do.

“For a restaurant, it’s easy to bring in five or 10 pounds of a new fish and try it out,” she said. “When you’ve got 19 grocery stores it takes a bit of planning. We also like to have a consistent supply at our stores, since often it takes seeing it for a few times before a customer will buy it.”

While “trash fish” is a trendy term, it’s one some seafood advocates are strongly opposed to. Barton Seaver, a chef, author and seafood advocate based in South Portland, Maine, argues the term runs counter to goals of popularizing underutilized fish — a setback for the promise of sustainability they represent.

Seaver believes supermarkets can and should do more to acquire and sell sustainable options and promote them with an eye on making them part of the regular canon of offerings, as opposed to pointing out what’s foreign about them.

“The effective strategy is to say, ‘Hey! Here’s this awesome new fish that we’re proud to introduce. You’re going to love it!’” Seaver said. “You’re selling experience, exploration and discovery rather than guilting people into buying something because they should be.”

For example, Seaver pointed to the efforts of Hannaford Supermarkets, which champions high standards of seafood sourcing and sustainability, and through a partnership with the Gulf of Maine Research Institute, has developed a market for locally caught if somewhat less-popular varieties like pollock, whiting and mackerel. “They’ve done a great job educating the people behind the counter on the civic and social and discovery aspects of this,” Seaver said of Hannaford. “In that way it’s given seafood the halo that hangs over farmers’ markets and local produce.”

Seaver recommends that supermarkets “sell the dish, not the fish,” emphasizing the qualities of species above the species itself.

“Especially when it comes to white fish, it doesn’t really matter to the casual cook what flaky white fish you’re using – it could be haddock or hake or monk or skate or dog or wolf or ling or cod. I think we should get away from seafood as individual species we prefer or dislike, and rather drive consumer conversation to what are the qualities of seafood we like or dislike,” he said.

Similarly, he said, stores needn’t have hundreds of recipes for fish but rather simple preparation notes that could work across a variety of species.

There’s still a place for organic and free-from varieties in the meat case
May 27, 2020

7 refrigeration tips to save retailers money
May 19, 2020