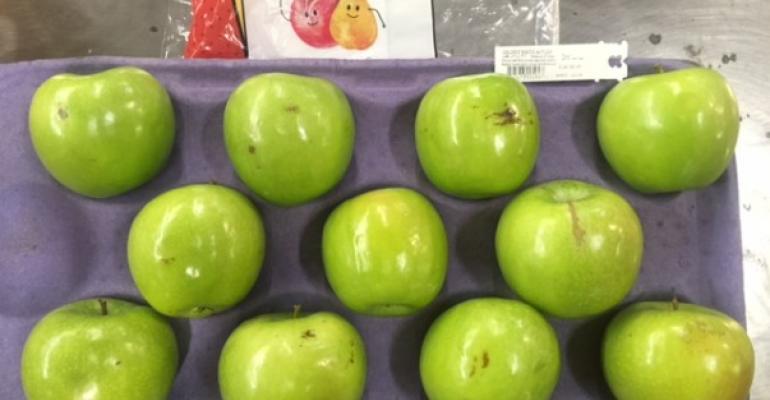 <p>Ugly produce is a &quot;Perfect&quot; way to reduce food waste, and to pass along savings to consumers.</p>
Issues & Trends>Sustainability

Wal-Mart Stores on Tuesday said it would be the first U.S. retailer to sell imperfect apples under the "I'm Perfect" brand.

Officials said the initiative would help reduce food waste for suppliers and provide a more affordable produce option in stores. Three- and five-pound bags of "I'm Perfect" apples will be available in around 300 stores in Florida this week.

Walmart earlier this year began selling misshapen potatoes under the Spuglies brand at select stores. Walmart's United Kingdom based sister company Asda last year piloted a "wonky veg" program that's been so successful, "we now offer it year round when farmers have enough supply," according to Frank Yiannas, VP of food safety at Walmart.

According to CMI, nearly 30% of the apples and pears grown in the U.S. are set aside for cosmetic reasons — primarily bumps, blemishes or defects on the outside making their skin less attractive. Typically these fruits are sold to commercial wholesale companies for use in juices, applesauce or baked goods.

"What excites me the most about the launch of these 'I’m Perfect' apples is that it is a result of working with our suppliers to build the infrastructure and processes that create a new home for perfectly imperfect produce," Shawn Baldwin, SVP of global food sourcing, produce and floral for Walmart U.S., said in a blog post. "Because ugly produce can occur unexpectedly in any growing season or crop, we want to have the systems in place to offer this type of produce whenever it may occur."