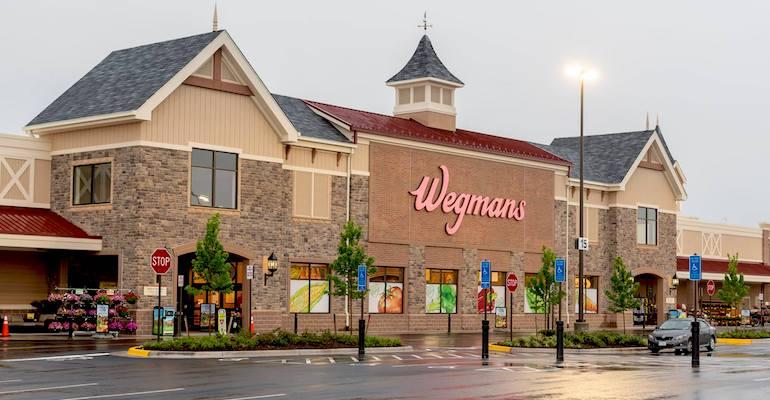 Wegmans
The Wegmans supermarket in Chantilly is among four of its Virginia stores that will stop offering free plastic shopping bags beginning next month.
Issues & Trends>Sustainability

Phaseout comes one month before county ban goes into effect

Plans call for the plastic shopping bags to be phased out of stores in Fairfax, Alexandria, Tysons and Chantilly, Va., effective Dec. 1, Rochester, N.Y.-based Wegmans said this week. Paper grocery bags will continue to be available for a 5-cent charge per bag.

The plastic bag removal comes in response to new Fairfax County legislation scheduled to go into effect on Jan. 1, 2022, according to Wegmans. Although the law permits retailers to offer plastic bags to customers at a 5-cent charge per bag, the regional grocer noted that it’s taking out the single-use plastic bags ahead of the county ban, as the company has done in other markets — notably in its home state of New York, where the bags were pulled from all stores in late January 2020. Wegmans said it also eliminated plastic bags at its two Richmond, Va., stores in 2019.

The money collected from the paper bag charge will be donated to each store’s local United Way and food bank, Wegmans reported.

“We’ve always understood the need to reduce single-use grocery bags,” Jason Wadsworth, packaging, energy and sustainability merchant at Wegmans, said in a statement. “By eliminating plastic bags and adding a charge for each paper bag, our hope is to incentivize the adoption of reusable bags, an approach that has proven successful for us in New York state and Richmond.”

Wegmans said that since introducing reusable bags in 2007, the company has been educating customers of their benefits, including added convenience. In a poll of shoppers who regularly use reusable bags, Wegmans found that customers’ top reasons for doing so, besides environmental benefits, were sturdiness, handles and ease of packing.

Sustainable packaging and reduction of waste and carbon emissions lead Wegmans’ environmental efforts. In September, for example, the grocer said it has shifted Wegmans-brand egg cartons to molded fiber from polystyrene foam. The new cartons are made of 100% post-consumer recycled newsprint and paper products. With the change, the company estimates that it will eliminate 625,000 pounds of foam from its stores annually.

Wegmans previously announced a goal of reducing in-store plastic packaging made from fossil fuels — as well as other single-use plastics, such as straws — by 10 million pounds by 2024. The company has said it will achieve much of the goal by removing some current plastic packaging and replacing it with materials made from plant-based renewable fiber. The effort is part of the retailer’s Zero Waste program to eliminate all forms of waste at its stores. It started as a one-year pilot in 2016 at the Wegmans store in Canandaigua, N.Y.