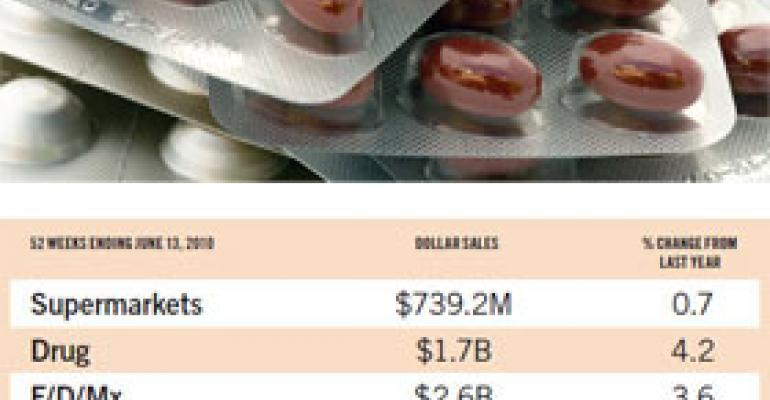 This highly seasonal category was relatively flat in the supermarket channel, with sales increasing less than 1% for the period covered

This highly seasonal category was relatively flat in the supermarket channel, with sales increasing less than 1% for the period covered. Activity was more pronounced in the drug and combined food/drug/mass channels, with sales increases of 4.2% and 3.6%, respectively.

Among the factors playing into the strength of sales is the intensity of the cold/flu and allergy season for any given year. Recent publicity surrounding the H1N1 swine flu outbreak, coupled with the regular flu season, did raise the profile of these types of over-the-counter remedies, though this did not always translate into preemptive purchases in anticipation of becoming ill.

To that point, industry analysts also note these types of products are “as-needed” purchases, with very few consumers buying them until symptoms actually occur.

The tablet category is dominated by several large brands, including Tylenol and Advil. Zyrtec, an allergy medication granted an Rx-to-OTC switch by the Food and Drug Administration in 2007, helped to boost overall category sales, though product development and brand extensions as a whole have been sporadic the past few years.

Though not yet broken out into a separate subcategory, anecdotal evidence indicates growth among homeopathic remedies, including tinctures and herbal preparations. Industry analysts note such medications increasingly appeal to those who have become wary of conventional formulas due to news about government warnings and product recalls.