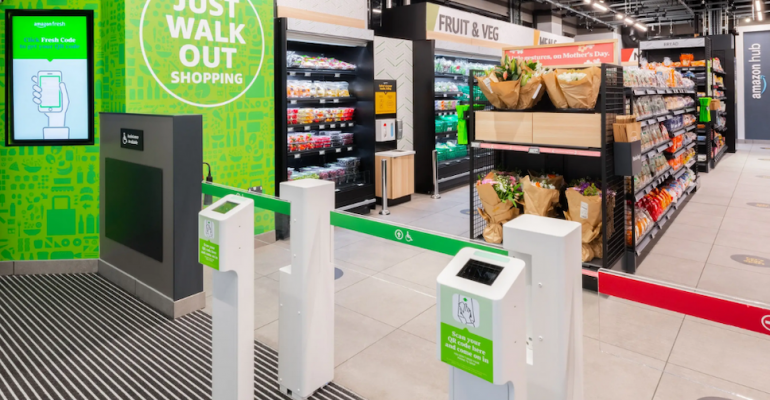 Amazon has opened its 11th Amazon Fresh store, but with two key differences from previous locations: It uses the company’s “Just Walk Out” cashierless technology, and it’s in the United Kingdom.

Sized at 2,500 square feet, the new Amazon Fresh in the West London suburb of Ealing, opened March 4, more closely resembles the compact Amazon Go convenience stores in the United States, yet with a bigger food and grocery offering, though not as extensive as the 10,000-square-foot Amazon Go Grocery stores. In fact, Amazon describes the U.K. Amazon Fresh as a “convenience grocery store,” serving hot food throughout the day; on-the-go meals for breakfast, lunch and dinner; staple ingredients for making meals; coffee; fresh-baked goods; sandwiches; newspapers and magazines; flowers; and Amazon devices.

The Just Walk Out system uses overhead cameras, weight sensors and deep learning technology to detect merchandise that shoppers take from or return to shelves and track items selected in a virtual cart. Customers use a QR code in Amazon mobile app to gain entry to the store through an automated gate. When they exit the store, the Just Walk Out technology automatically debits their Amazon account for the items they take and then sends a receipt to the app.

“Amazon opened its first checkout-free grocery store outside of the U.S. this week, with a 2,500-square-foot Amazon Fresh store in Ealing, London,” Coresight Research CEO and founder Deborah Weinswig wrote yesterday in her “Weinswig’s Weekly” report. “Although the store is branded Amazon Fresh, it uses the Just Walk Out technology seen in Amazon Go stores in the U.S.”

The opening of the Ealing Amazon Fresh also marks the the launch of “by Amazon,” a new Amazon food brand exclusive to the U.K. Amazon said the private-label line was “specifically created with our U.K. customers in mind” and encompasses hundreds of items, such as in-season fresh fruit and vegetables; responsibly sourced British fresh meat and fish; fresh-made sandwiches; fresh-baked bread; hot food; and partly prepared dishes to fully prepared meals, including traditional classics and “street food-inspired” dishes.

The Amazon Go convenience banner, which inaugurated the company’s Just Walk Out technology, now numbers 26 locations, including eight in Manhattan, seven in Chicago, six in Seattle and five in San Francisco. The stores range in size from 1,200 to 2,700 square feet, except for one 450-square-foot, employee-only location in Seattle’s Macy’s building.

“Amazon’s apparent commitment to U.K. grocery retail is confirmed by the launch of a new ‘by Amazon’ private label at the Ealing store,” according to Weinswig. “Nevertheless, the direct impact on incumbent U.K. grocery retailers will almost certainly be minimal even over the medium term, as building any meaningful market share in grocery is a long-term task. Even in the U.S. market, Amazon has only established 33 physical grocery stores (excluding Whole Foods Market) and the ripples from them have been slight.”

Weinswig foresees potentially greater impact from the geographic expansion of the Just Walk Out technology in food and convenience retailing.

“Amazon’s venture will provide another nudge for retailers to innovate around the checkout experience. Amid COVID-19, we have seen many retailers in various countries roll out different iterations of low-contact or checkout-free technologies, although most of those implemented so far are iterations on self-scan. Closer to Amazon’s autonomous offering, in the U.S., we have seen 7-Eleven and Giant Eagle trialing or launching stores with entirely contact-free checkouts.”

She also cited the inception of “smart” shopping carts — including the KroGO cart (from Caper Inc. introduced by The Kroger Co. in January and the Amazon Dash Cart unveiled last July (now in use at Amazon Fresh stores) — as helping to advance cashierless shopping.

“The creep toward checkout-free grocery stores is therefore proving gradual, with Amazon’s innovations in the market another spur for conventional stores to compete,” Weinswig said.