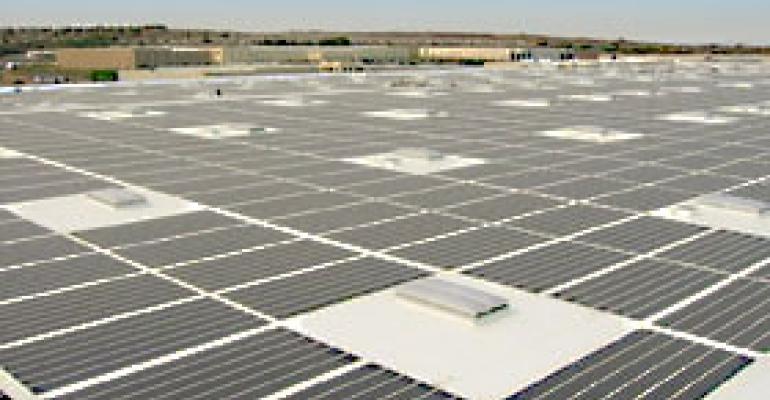 Many of these technologies are relatively rare for supermarket operators. But Tesco-owned Fresh & Easy, which operates about 176 stores in California, Arizona and Nevada, has emphasized green initiatives since opening its fresh-focused, small-format outlets in 2007.

In one of its largest energy-saving initiatives, Fresh & Easy has installed framed glass doors on medium-temperature cases in about 45 stores and plans to put them in all current and new locations by March of next year, said Steve Hagen, the chain's director of national procurement and engineering, who described its energy programs last month at the Food Marketing Institute's Energy & Store Development Conference in Atlanta.

The doors, supplied by Remis America, Elkhart, Ind., are attached to cases containing beer and wine, packaged deli, meat, fish, poultry and non-liquid dairy; frozen- and liquid-dairy cases companywide already had doors, provided by Anthony International, Sylmar, Calif. Only bakery, produce and endcap cases were left without doors, though the chain plans to install them in endcap and produce cases in one store next year. (Fresh & Easy carries mostly prepackaged produce.)

Fresh & Easy looked at framed and frameless doors; though the latter exposed more product, the former were selected because they allow anti-fog film and gas to prevent doors from sweating and fogging without energy-consuming in-door heating elements.

At one test store, Fresh & Easy determined that the doors saved more than 100,000 kilowatt hours annually, or just over $10,000, given a utility rate of 10 cents per kilowatt-hour, said Hagen, who noted that the savings would be greater for 24-hour stores or those that don't use night curtains. The doors were also found to cut shrink by 50%, improve merchandise visibility and temperature control, and increase dwell time by shoppers because aisles are warmer, he said. The stores raised the “suction temperature” three or four degrees to prevent freezing in the cases.

In assessing customer reaction to the glass doors, Fresh & Easy conducted exit interviews and focus groups, and looked at shopping patterns through security cameras. Contrary to concerns that doors would impede sales of refrigerated product, the test stores experienced increases in sales “in every case that had glass doors,” Hagen said. “The customer gets the idea that glass doors are just like the doors on their home refrigerators. They would never take the doors off their refrigerators.”

“Even after sales went up, they still said [this particular] case would be better without doors,” he said. “I think they're over that.”

Store operations people asked him if stores would require extra labor to stock cases with doors. The answer turned out to be no. “Even if there is a little extra labor with doors, it is offset by the reduction in shrink and product rotation,” he added.

After glass doors are installed in a store, Fresh & Easy authorizes the store's energy components to be commissioned. “They evaluate which compressor should be turned off and redo the energy management strategy for controlling the compressors that are left,” said Hagen. This means that less reclaim heat is available for stores, though that is less of an issue because of the warmer geography of Fresh & Easy's market area.

In addition to retrofitting all of its stores with glass doors, Fresh & Easy has made another chainwide change in an unlikely place — the checkout lane, where the overhead lights (showing the lane number and open/closed indication) have been switched to two-watt LED models from 40-watt incandescent bulbs and 13-watt compact fluorescents.

Hagen decided to use LED lights in checkout lanes when his lighting vendor suggested testing them in one store and “seeing if anybody noticed,” he said. Neither company executives nor store personnel noticed the change, so he retrofitted the store, cutting energy costs in half, with a payback of less than a year. “Nobody really thinks about [checkout light fixtures],” said Hagen.

Another major environmental investment for Fresh & Easy has been in condensers, the part of a supermarket refrigeration system where the refrigerant gas is liquefied and discharges its heat to the environment on rooftops. In particular, the chain has invested in microchannel air-cooled condensers and hybrid condensers to take the place of traditional air-cooled or evaporative condensers in a number of stores.

Over the past year, six stores have been equipped with hybrid condensers (from Muller Industries, Irvine, Calif.), six with microchannel air-cooled units (from Hussmann and Heatcraft) and four with both types. All new stores will get microchannel condensers or a combination of microchannel and hybrid, depending on outside temperatures. “It changes fast as we open stores frequently,” said Hagen.

Used for 15 years in the air-conditioning systems of cars, microchannel air-cooled condensers feature flat aluminum tubes with multiple passages, reducing the need for refrigerant, said Hagen. Other benefits include energy efficiency, corrosion resistance, lighter weight and quieter operation. “There is some hesitation about them because early [supermarket] installations had some failures,” he noted. “But manufacturers quickly recognized their early mistakes and made modifications.”

“We started looking at hybrid condensers because of our desire to reduce water usage from evaporative condensers, which are used a lot in the West,” said Hagen. “They only turn on water when ambient conditions say you're going to condense above the temperature you want to condense at.”

Hybrid units, which are smaller than standard condensers, reduce water consumption up to 75% over water-cooled systems while decreasing refrigerant charge and lowering operating costs, resulting in a less-than-two-year payback, he said. Fresh & Easy is using them in inland locations where temperatures exceed 95 degrees, while microchannel air-cooled condensers are used in cooler temperatures.

A fuel cell, for example, generates relatively “clean” electrical energy as well as heat that can be used in a store; as byproducts it produces mostly water plus limited amounts of carbon dioxide, and no harmful nitrogen or sulfur oxides. Fresh & Easy is planning to use six 5-kilowatt fuel cells — small units for the chain's small-format stores — in a new store in San Francisco, said Hagen.

The chain has secured state utility rebates, a tax grant and Department of Energy funding for the fuel cells. However, their deployment was put on hold as the chain awaited an expected resumption of California's self-generation rebate program.

“A financial return [for fuel cells] happens with a lot of incentives or super-high energy costs,” Hagen said. “We were fortunate to get DOE incentives, on top of the traditional rebates. Otherwise, it would not have worked for us.”

With the financial assistance, the return on investment for Fresh & Easy's fuel cells is seven to eight years, though it would be less with accelerated depreciation tax benefits; fuel cells last about 20 years.

Using natural gas as a fuel, Fresh & Easy's fuel cells, from ClearEdge Power, Hillsboro, Ore., are expected to account for about 25% to 30% of the energy used in the store, Hagen said. In addition, the fuel cell's waste heat will be used to meet most of the store's heating needs. Whether a combined heat-and-power (CHP) system such as a fuel cell pays off will depend on “how well you use the waste heat,” said Willis McCullough, national program director, Energy Efficiency Services, who spoke with Hagen at the FMI Energy & Store Development Conference.

Roof-mounted solar panels, from REC Solar, San Luis Obispo, Calif., were installed in August at 10 Fresh & Easy stores in Arizona and one in California. Like fuel cells, the solar technology is made financial viable with state utility and tax grants. “We evaluate it every time a new rebate program comes out,” said Hagen. Fresh & Easy also has rooftop solar panels supplying 19% of the power at its distribution center in Riverside, Calif.,

While essential for solar and other energy installations, government incentives tend to vary in proportion to utility power costs, so the best incentives occur when rates are higher. “It's never a slam dunk,” Hagen said. “It just balances out.” Another hurdle with solar panels is complying with local codes. “Virtually every city and every fire department have their own opinions on codes,” he said.

Still, he said, renewable energy generally makes financial sense if “your operation is a significant energy user, energy rates are high and expected to keep rising, and there are good incentive programs to pursue at the state and federal level.”

Another way of defraying energy project costs is to take advantage of tax deductions for accelerated depreciation and federal income tax credits, which can be received for 30% of the system cost. The ROI on solar panels with accelerated depreciation is about six years, and without it (Fresh & Easy's case) about 10, he said. “We'd prefer the ROI to be better but solar panels last 25 years. Also, the technology will continue to evolve and we want some familiarity with it.”

Retailers using solar power can also benefit from “net metering,” which exists in 43 states. With net metering, when a solar system produces more energy than a store uses, the meter “runs backward” and builds up a credit with the utility; that credit is applied when the system produces less electricity than the store uses.

Next year, Fresh & Easy will open a store in Northern California that will have solar panels on the roof and use a 65-kilowatt microturbine outside the store whose waste heat will be captured for hot water and store heating. “That store should have a negative energy use — we should generate more energy than we use,” Hagen said.

Solar panel companies are good at assessing whether a store is suited for a solar installation.

“They can look at a satellite and your building and see where the trees are and how much sun you can get,” said Hagen. All reputable companies, he added, use the same software to calculate the expected performance of the panels. He advised not to deal with companies promising “free” power with rebates.

Fresh & Easy looked into installing wind turbines at a number of sites, but only two had enough sustained wind to support the turbines, said Hagen. Even there, “when we did the financials, it wasn't enough to do it,” he said. “Also a lot of the public disliked having the turbines there, and there was potential for [interference from] birds.”