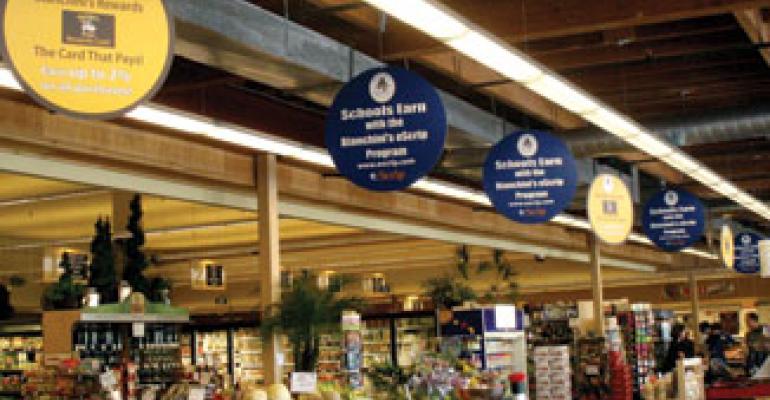 Over the two-plus decades they have been part of the supermarket business, card-based electronic loyalty programs, for better or worse, have generally hewed to a few basic tenets.

In essence, the programs call for shopper to present their cards at the checkout to receive price reductions. This enables retailers to know, on an item-specific basis, what each of their shoppers is purchasing, as well as who their best shoppers are. Armed with this knowledge, retailers can tailor additional rewards to shoppers based on their particular shopping tendencies, and even alter product assortments to reflect shoppers' tastes.

Some retailers, such as Kroger and Safeway, have been able to make hay with this approach, using shopper insights to develop sophisticated marketing and merchandising programs. But for other retailers, the programs have stalled amid a glut of data and been reduced to offering store discounts in exchange for a card; lacking that card, shoppers often receive the discounts anyway.

In recent months, in an effort to improve on the traditional model, some new loyalty programs have emerged. Geared to small or mid-sized retailers without the technical wherewithal of the larger chains, these new programs leverage some of the principles of past programs, but in other respects depart significantly from the traditional approach.

For example, Cardiff Seaside Market, a 25-year-old single-store operator based in Cardiff-by-the-Sea, Calif., emphasizes in its Seaside Rewards Card program that shoppers will find the same prices with or without membership. “We're all about rewards, not punishments!” the retailer declares on its website (www.seasidemarket.com). “If you choose not to [participate in the program], you will NOT be punished with higher prices!”

Moreover, the site says, “we don't collect item-specific purchase information.” The store only collects a shopper's total purchase amount “to calculate your reward.”

The reward proffered via the program is a rebate of between 1% and 3% of total purchases, based on total monthly spending; it is mailed twice a year to those who have accumulated at least $10 in rewards. As of last week, the program's more than 9,000 members had earned $174,118 during the second half of the year, with the No. 1 earner garnering $610, according to the website. The program is managed by California-based Electronic Scrip Inc. (ESI), known for its eScrip fundraising program (which Cardiff also uses).

The loyalty program adopted by Cardiff Seaside Market, which ESI calls the WIN (What's Important Now) program, is also employed by two other California independent grocers — Jensen's and Bianchini's Market — and will be used by a third, Draeger's Market, soon, said Richard Sutch, executive vice president of marketing, ESI. “It's particularly for small and mid-level grocers with up to 150 stores that don't have the ability to put millions of dollars into a program,” he said. The program is designed to help retailers understand “who their best and occasional shoppers are,” he added.

This type of loyalty program is more typical outside the U.S., noted Gary Hawkins, president, Center for Advancing Retail & Technology (CART), and chief executive officer of Green Hills, Syracuse, N.Y. “It's very similar to what Tesco does in the U.K. market, rebating a portion of sales, typically 1%, to shoppers.”

Cardiff Seaside Market launched the ESI program two years ago “to prove to customers they don't have to have a card to get deals in the store,” said John Najjar, the store's owner. Instead, he noted, the program is structured so that “the more you shop, the more you're recognized as a good customer.” Spending of shoppers in the program has increased, and shopper retention has risen as well, Najjar said, declining to be specific. He did not say what Cardiff pays ESI to run the program.

Cardiff's unconventional approach to loyalty raises questions about the efficacy of the traditional two-tier loyalty system that offers product discounts only to card holders. Mandating card usage to get low prices “is not a reward,” said Sutch. Those retailers “just want to get data.” The ESI program, by contrast, is an understandable reward that “any shopper can digest easily.”

Fiza Tai, brand manager for the WIN program, noted that shoppers in two-tier-price loyalty programs sometimes substitute a generic card to get the lower prices, which compromises the quality of the data. “We want real data,” she said.

Hawkins acknowledged that it is much easier from a technology perspective to implement a rebate program than a more “full blown” traditional loyalty program involving two-tier pricing and a database to capture item- level data.

On the other hand, two-tier card programs are generally regarded as driving the greatest shopper adoption. “They give shoppers the strongest reason to use the card,” said Ben Sprecher, co-founder and vice president of marketing for Incentive Targeting. “The accumulated points model tends not to have card usage as high [as the two-tier] model.” High card usage, in turn, provides the greatest opportunity to “mine the value of the shopper base.”

Najjar does require shoppers to partake in the program to receive information on weekly ad specials via email; the store no longer provides paper ad circulars. More than 80% of shoppers provide email addresses, said Sutch. But shoppers can also access the information on the company's website.

Cardiff is also departing from the norm in declining to gather specific shopping information on customers. “We don't want to be an intrusion,” Najjar said. “We just want to reward customers.”

Najjar said he doesn't need item-specific information on shoppers because “we know what they are buying and we give them what we think they want.” If he collected their purchase information and provided targeted discounts, he fears shoppers might think he was “giving their data away.”

But Hawkins contends that having item-level data identified to a customer is mission-critical for retailers. “Such data can support more intelligent decision-making around assortment decisions, and improve decisions around promotions,” he said. “SKU-level customer data is also necessary for relevant, personalized marketing, which is a growing trend in the industry.”

And by not offering targeted, product-based rewards, Najjar is likely sacrificing promotional support from manufacturers, although they do support general weekly promotions. “I may try to get vendors to participate [in the card program],” he said. Meanwhile, he foots the bill for the rewards program

Retailers using the WIN program could collect item-specific data, and new and existing users will probably do so, Sutch noted. “It would make it more meaningful to CPG companies if they had a better idea what was being purchased,” he acknowledged, adding that ESI is considering developing targeted promotions based on that data.

On the other hand, Sutch doesn't believe that loyalty programs should be purely vendor-financed. “We always want our [retail] clients to have skin in the game,” he said. “If some of it comes out of their pocket, they are more engaged. The entire chain must be engaged so customers know how important it is.”

But Hawkins pointed out that a rebate program can be costly to the retailer, who is effectively giving up 1% of more of sales by way of the rebate. “In a business where retailers typically work on a 1-2% net profit margin, 1% is costly,” he said. “These type programs need to generate a significant top-line sales gain to offset the added cost.”

Another loyalty program, which incorporates new technology elements as well as some unorthodox rewards, is marketed by Accelitec Interact, Bellingham, Wash. The program was adopted first by Top Food & Drug, a division of Haggen, also based in Bellingham, which rolled it out as the Top Connection program to 18 locations in July 2009.

One difference in the Top program is that instead of a magnetic-stripe or bar-coded card, shoppers are provided with a 1.5-inch-square plastic RFID keychain link. They identify themselves at the POS by tapping the link on an RFID reader. Another novelty is that shoppers are given an “electronic wallet” account — accessible on Top's website — in which rewards and credits accumulate; shoppers apply these credits to purchases at the POS.

Tops is offering some unusual rewards via its program, including a seven-day price guarantee — if a purchased item goes on sale within seven days of the purchase,, the shopper is credited with the difference between the regular and sale price plus 1% of the difference. Other program benefits include automatic returns, recall notifications and personalized offers. Shoppers do not need to be in the program to get regular store discounts.

Newport Avenue Market, a one-store operator in Bend, Ore., launched its version of the Accelitec program — called the Foode Flash Card loyalty program — a year ago. The card includes an RFID chip used to identify shoppers at the POS and reward them with rebates on purchases. More than 8,000 shoppers are signed up for the card, about 60% of store volume, with a goal of 85%, said Newport Avenue owner Rudy Dory.

Under the program, shoppers earn “moolah” — six cents for every $5 spent — that goes into their electronic wallet and can be spent any time, with updates given at the checkout. They get $5 in moolah for signing up.

Newport Avenue's latest twist is an arrangement slated for January with ConAgra Foods — its first with a manufacturer — whereby purchases of ConAgra products will earn electronic credits. “It's a way to track deals and put money into consumers' rather than retailers' hands,” said Dory. “It's based on the sell, not the buy.” He is working on developing more programs of this sort with vendors, and channeling leftover temporary-price-reduction funds to card holders. Otherwise, all shoppers get the same store discounts, with or without the card.

Shoppers who don't have their card can identify themselves by providing a phone number. This was not initially possible at the store's self-checkout lanes, which process 40% of transactions. The glitch was corrected recently, allowing Dory to make greater use of the program, including offering targeted discounts.

Dory said a clear advantage of the program is that it allows him and his employees to know who their best customers are. “When we launched the program, only our meat manager knew the woman who was our best customer,” he said. “Now everyone knows who she is.” Employees are expected to treat top customers with extra friendliness and consideration.

As an independent grocer, this personal touch remains a key asset for Dory. “We can't buy as cheaply as the chains,” he said. “We've got nothing to offer except ourselves and being part of the community.”

The Accelitec program costs Dory about $650 per month in software costs, which he considers a reasonable cost for “knowing who your best customers are.”

Another relatively new loyalty system, being offered by Incentive Targeting, Cambridge, Mass., puts an emphasis on targeted promotions made possible through vendor-retailer partnerships. The system, based on cloud-based software run by Incentive Targeting and accessed by users over the Web, has been employed since January at Big Y, Springfield, Mass., and was recently adopted by Spartan Stores, Grand Rapids, Mich., said marketing VP Sprecher. Two other unnamed retailers are also using the system.

According to a statement from Big Y and Incentive Targeting, Big Y completed a rollout of the system across its 56-store chain in April. The retailer, in collaboration with manufacturers, is using the system to leverage its loyalty card data and “deliver customized offers to each shopper,” said Phillip Schneider, vice president of sales and marketing at Big Y. The system facilitates this process by sharing loyalty data between the chain and brands, creating promotions in minutes, and monitoring promotion results.

“We are pleased to be working with Big Y to test and validating new ways of reaching exactly the shoppers we both want with promotional offers,” said Rob Colarossi, vice president of category leadership at Hostess Brands. “We can target offers that are relevant and interesting with their shoppers and in turn will improve our mutual sales.”

Many of the targeted campaigns facilitated by Incentive Targeting are initiated by CPG brands, but “in alignment with the chain's goals,” said Sprecher. In other cases, the chain has a promotion channeled to specific shopper segments it has identified.