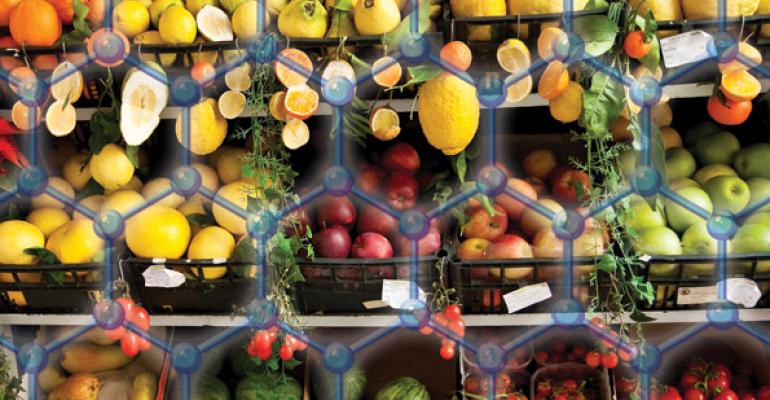 Nanotechnology could revolutionize fresh food packaging, but a growing number of organizations are expressing concern about the industry’s lack of regulation

In 1990, physicist Donald Eigler used a scanning tunneling microscope to take 35 individual xenon atoms and arrange them to spell the name of his company, IBM. The world’s tiniest corporate logo made a huge impression on journalists, netting IBM and Eigler’s team news coverage around the globe. And, while the successful experiment was the culmination of more than two decades of theory and research by dozens of teams like Eigler’s, this story introduced many casual readers to the field of nanotechnology — engineering at the atomic and molecular level.

Many consumers would be surprised to learn how widespread the technology has become since then. Many common brands of stain-resistant clothing use nanotech-enhanced fabrics, for example. Nanomaterial coatings can make golf clubs stronger or electronic touchscreens more smudge proof. Many sunscreens now incorporate nanoparticles of titanium dioxide, which is very effective at blocking ultraviolet rays that lead to sunburn and skin cancer.

And, for fresh food retailers, nanotechnology is currently showing a lot of promise in the field of fresh food packaging, with researchers working to develop next-generation materials that could extend product shelf life, alert suppliers and retailers to the presence of pathogens in foods, or even actively eliminate bacteria, including salmonella and E. coli.

Unfortunately, these new technologies are also raising new concerns, particularly when they are used in applications that involve food or cosmetics. Expect these concerns to grow as more nanotech applications begin making their way out of the lab and onto supermarket shelves.

There are currently four major areas of research involving nanotechnology applications for packaging materials. First, polymer-clay nanocomposites, which embed nanoscale particles of volcanic ash into plastics, are currently the most common commercial application in food packaging, according to “Nanotechnology in Plastic Food-Contact Materials,” a recent article in the Journal of Applied Polymer Science. In addition to other benefits, these materials provide a barrier that can be used to keep carbon dioxide and nitrogen in a package, while keeping oxygen out. This helps prevent oxidation and extends the shelf life of products including meats and fresh cut fruit.

Other emerging applications include films with embedded enzymes that could improve shelf life by “scavenging” oxygen from within a package, which would slow oxidation and inhibit bacteria growth. And, silver-based nanocomposites have also been proven to kill microorganisms, including several pathogens. Lastly, there is the study of nanosensors, which are embedded in films to create “intelligent packaging.” Distributors and department managers someday may get used to seeing entire packages change color if the product inside got too warm at some point in the supply chain.

But, for all of its promise, nanotechnology presents risks as well. Scientists already acknowledge that nanoparticles often behave in a fundamentally different manner than the bulk materials from which they are sourced, even though current regulations tend to treat silver-based nanocomposites the same as regular silver, for example.

“Matter such as gases, liquids and solids can exhibit unusual physical, chemical and biological properties at the nanoscale, differing in important ways from the properties of bulk materials and single atoms or molecules,” the federal U.S. National Nanotechnology Initiative explains on its website.

In 2008, a group of researchers found that many types of inhaled nanoparticles can cross cell walls and damage cells, while a 2006 study commissioned by the Australian government found that nanoparticles tend to accumulate and persist in human tissues, to unknown effect, according to “Nanotechnology for Food Applications: More Questions than Answers,” a 2010 article in the Journal of Consumer Affairs. Also, very little research has been done on the potential environmental impacts of nanoparticle creation or disposal.

A separate study, cited by the Journal of Polymer Science article, found that lab rats contracted respiratory tract cancer when titanium dioxide nanoparticles were placed in their drinking water.

Several consumer advocacy groups have grown frustrated by the failure of the U.S. Food and Drug Administration or other federal agencies to inspect and regulate this rapidly growing industry.

“The [FDA] regulates numerous nanomaterial products, including sunscreens and cosmetics that contain engineered nanoparticles. Yet the agency has taken no regulatory steps to formally recognize the inherent differences of nanomaterials and begin to address their associated new risks to human health and the environment,” reads a petition filed in 2006 by a coalition of groups led by the International Center for Technology Assessment.

Last month, the same groups sued the FDA for failing to take substantive action on their earlier petition during the intervening 5 years.

Among many suppliers, there is a wait and see attitude. In recent months major companies including Kraft Foods, McDonald’s and PepsiCo have publicly stated that their products and packaging do not currently incorporate nanotech materials.

Meanwhile, consumers are still largely unfamiliar with the field, and their opinions are still very malleable. A recent meta-analysis by the journal Risk Analysis found that in surveys conducted in the U.S., Europe and Japan between 2002 and 2009, over 50% of consumers reported knowing “nothing at all” about nanotechnology. Only 20% said they knew “some” or “a lot.”

Consumer opinion is still clearly up for grabs on this issue. Currently, the best analogy may be opposition to genetically modified crops, which concern a small but vocal minority of consumers.