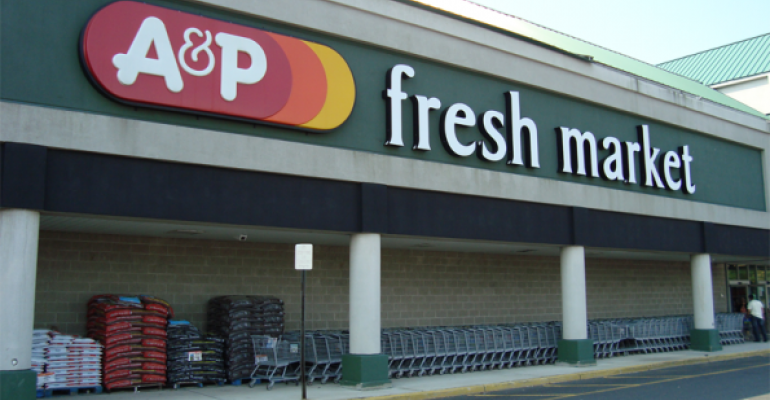 &ldquo;We needed to put a plan in place to address the obsolescence and to enable the infrastructure to grow. And that&rsquo;s what we went about doing.&rdquo; &mdash; Nirup Krishnamurthy, CIO, A&amp;P

NEW YORK — Not long after Nirup Krishnamurthy joined A&P as chief information officer in September 2011, he got a distress call from the retailer’s human resources department.

The weekly two-minute video for store-level employees from Chief Executive Officer Sam Martin — a 5-megabyte file about the size of an iTunes song — did not make it through the chain’s network to its stores. Could he do something about that?

“Sure, in five minutes,” Krishnamurthy recalled saying during a presentation last week at the National Retail Federation’s Annual Conference here. But when he put that request through to his IT department, he was told the task would take a lot longer — more like nine hours. The transmission would have to wait until the next day.

At that time, A&P, Montvale, N.J., the venerable grocer whose roots pre-date the Civil War, was still going through Chapter 11 bankruptcy, which it filed in December 2010 and from which it would emerge in March 2012. The networking problem was symptomatic of broader infrastructure and technology weaknesses that had contributed to the chain’s financial struggles. It was Krishnamurthy’s job to right the IT ship, enabling what he called a “transformation” of A&P’s culture and business practices, and building on the financial and remodeling efforts the chain has made during its turnaround.

“We needed to put a plan in place to address the obsolescence and to enable the infrastructure to grow,” he said. “And that’s what we went about doing.” Starting in full force after A&P’s emergence from Chapter 11 bankruptcy, he is nearly a year into the IT overhaul, most of which is expected to take 24 to 36 months.

Krishnamurthy has corrected the networking problem, increasing bandwidth to stores five to tenfold while reducing network costs by one-third. He is also consolidating A&P’s data center, with plans to cut its footprint by 50% by the end of this year. At A&P’s 320 supermarkets across six Mid-Atlantic states, he is working on using technology to make product assortment match the individual demographics of each store, ensure that planograms are optimized, track inventory more accurately, and order product in an automated fashion.

In many cases, A&P is partnering with third-party vendors like SAS, SAP, Fifth Dimension and Galleria, “who are willing to work with us on our terms,” said Krishnamurthy. “I’m not a big proponent of building our own systems.” The chain also works with offshore firms like Wipro, with which it is transferring financial and accounting functions.

This all represents a major step forward for an IT department that had been running a basic “keep the lights on” operations and for the company as a whole. “We plan to move from a gut-based, experience-based decision-making process to a fact-based, analytically oriented one ties to customer behavior and sales,” said Krishnamurthy. “That’s a huge transformation for us culturally.” The company will also need to bridge organizational silos and “integrate the way we operate as a company.”

Still, for now he will eschew the flashier technologies on display at the NRF Conference last week — such as customer-facing digital, mobile and e-commerce systems — in favor of shoring up A&P’s foundational back-end processes and supporting the company’s day-to-day business activities. “Our transformation starts with fixing our backyard first, then expanding it out to customers,” he said.

Krishnamurthy told SN that A&P, using capital freed up after coming out of Chapter 11, has only had to make a “modest investment” in new technology, and has been able to cut operating expenses via system improvements.

Key to the IT improvements at A&P is Krishnamurthy’s close working relationship with CEO Martin. In a video shown at the NRF presentation, Martin said the CIO/CEO relationship “has been crucial to our company’s turnaround.” Krishnamurthy, who said he now has a seat at the executive table, observed that his relationship with Martin has gotten stronger. “He’s a CEO who understands the value that technology and a business-oriented CIO can bring to the table.”

Krishnamurthy’s first order of business was the network upgrade, which took seven to eight months to complete in partnership with XO Communications, Herndon, Va. This included replacing 16-bit token rings in the stores with TCP/IP Ethernet connections, and setting up the wide-area network to the stores with a cable or DSL back-up. “We configured the lines to handle peak loads much better,” he said. The network now allows A&P to push planograms to the store electronically rather than by conventional mail.

As part of the IT changes, stores’ product assortment will become much more tailored to the demographics of each area. “We will not be like McDonald’s,” Krishnamurthy said. “The Weehawken [N.J.] store will be different from the store in Montvale.” To that end, store planograms will be optimized, as will promotions. In addition, an automated store ordering system that accurately tracks inventory will be deployed chainwide “to ensure that we are not out-of-stock or overstocked.”

A&P is also developing pricing engines using mathematical models that will enable demand forecasting and a better understanding of margins and the value of promotions. “This was not done in a sophisticated manner before,” said Krishnamurthy.

Another new initiative under development is an activity calendar for stores that links the company’s 30,000 unionized employees to merchandising directions from corporate headquarters. Promotions, for example, will have “a clear line of visibility between corporate and stores and a way to measure it,” he said.