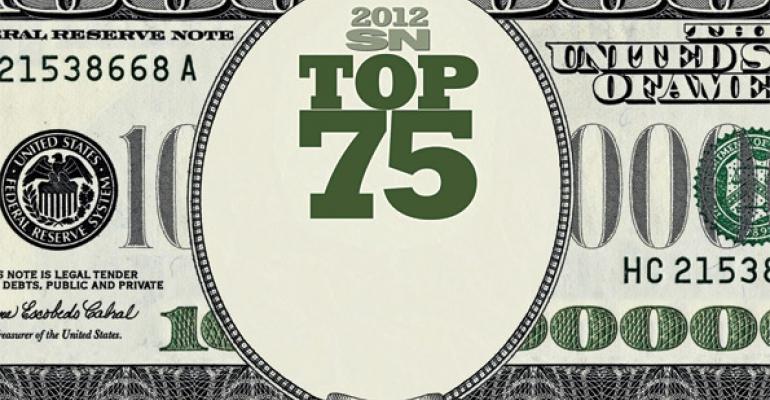 For the first time ever, all 75 companies on SN’s list of the Top 75 food retailers and wholesalers in North America achieved annual sales in excess of $1 billion.

For the last several years, between three and five chains at the bottom of the list had volumes below $1 billion.

Industry observers attributed the increases this year primarily to the impact of inflation.

“For the vast majority of companies, it’s probably inflation that pushed them past the $1 billion mark,” Chuck Cerankosky, an analyst with Northcoast Research, Cleveland, told SN. “The economy certainly hasn’t been much help, but inflation of 3.5% to 4.5% probably provided most of the boost.”

Some of the added sales may also have come from weaker operators who closed stores, allowing others to pick up the volume they lost, he added. “That’s what happens in this kind of economy, where companies with negative same-store sales growth and poor sales trends lose share and decide to shut some stores.”

Gary Giblen, analyst at Aegis Capital, New York, also said inflation was apparently the major factor propelling volumes, along with some operators dropping out of the picture and putting their volumes up for grabs.

Four companies debuted on this year’s list: Target Corp., Minneapolis, at No. 4; Sprouts Farmers Market, Phoenix, at No. 68; PAQ, Stockton, Calif., at No. 73; and Fresh & Easy Neighborhood Market, El Segundo, Calif., at No. 75.

Target was added to the list this year as a result of expanding its food offerings in recent years — adding P-fresh sections at close to half its stores to boost its consumables volume, which encompasses groceries and pet supplies, to 19% of its $70 billion sales base, or approximately $13.3 billion.

To qualify for the Top 75 list, companies have to generate at least 50% of their total volume in consumables. However, SN editors determined that, as Target moves more aggressively into food, its grocery volume alone now qualifies it for the list.

“Target is a strong retailer to begin with,” Cerankosky said, “and as it has seen the economic downturn impact its general merchandise sales, it’s decided to accelerate its move into the food business, which it was in to a lesser degree before the economy collapsed — and its food business is helped by the fact Target has a higher-quality image than Wal-Mart.

“But as the economy recovers, Target might have to consider giving more space back to general merchandise to recover some margin — but that will be a nice problem to have.”

Mark Wiltamuth, managing director at Morgan Stanley, New York, said the P-fresh sections at Target drive favorable impressions among consumers. “Surveys indicate that customers who have been exposed to P-fresh showed higher intentions to shop Target [going forward], and customers who normally shop at a P-fresh format were likely to [identify] Target as their favorite or main store.

“This held true across all product categories, [which means] P-fresh can drive both additional trips and incremental shopping across the store.”

Giblen said Target expanded its food offerings “because it needs the traffic, and it can’t afford not to do it if it wants to compete with Wal-Mart Stores. Target’s general merchandise strategy is to be better in fashion and apparel than Wal-Mart, though Wal-Mart is getting better in fits and starts, so food provides another option for Target to drive traffic.”

Sprouts joined the Top 75 list as a result of a deal with Smart & Final, Los Angeles, last spring, in which it acquired 43 stores — 34 Henry’s and nine Sun Harvest Markets.

PAQ earned its position on the list as a result of acquiring eight stores in Hawaii — seven Big Save Markets and one Shima Market — to add to the 28 Times Markets it operates there, plus 26 stores in Northern California.

Fresh & Easy — the U.S. division of Tesco, Cheshunt, England — found its way onto the list by continuing to open its small-format stores in California, Arizona and Nevada, with 200 in sight for the end of its fiscal year in February.

The addition of Target, Sprouts, PAQ and Fresh & Easy to the Top 75 meant the four companies at the bottom of last year’s list dropped off the 2012 list: URM Stores, Spokane, Wash., which was No. 72 a year ago; Fareway Foods, Boone, Iowa, which was No. 73; Grocery Outlet, Berkeley, Calif., which was No. 74; and Woodman’s Markets, Janesville, Wis., which was No. 75.

• 7-Eleven Stores, Dallas, moved past Sobeys and H.E. Butt Grocery Co. to No. 12 on this year’s list after acquiring 28 stores on the West Coast and in Colorado last spring.

• Nash Finch Co., Minneapolis, fell to No. 32 from No. 29 last year after losing a major customer in North Carolina.

• Grocers Supply Co., Houston, fell to No. 44 this year from No. 40 a year earlier following the sale last spring of one of its customers — Super S Foods, a 53-store operator with sales estimated at $250 million — to Lowe’s Market, Littlefield, Texas, which buys from Affiliated Foods, Amarillo, Texas.

• Bi-Lo, Mauldin, S.C., rose to No. 47 from No. 52 a year ago following an ongoing store renovation effort and a more concentrated focus on promotional pricing.

• Spartan Stores, Grand Rapids, Mich., came in at No. 51 this year, vs. No. 47 a year ago, as it dealt with the ongoing challenges posed by the difficult Michigan economy.

• Marsh Supermarkets, Indianapolis, dropped to No. 72 from No. 68 in 2011 as it continued to struggle with same-store sales.