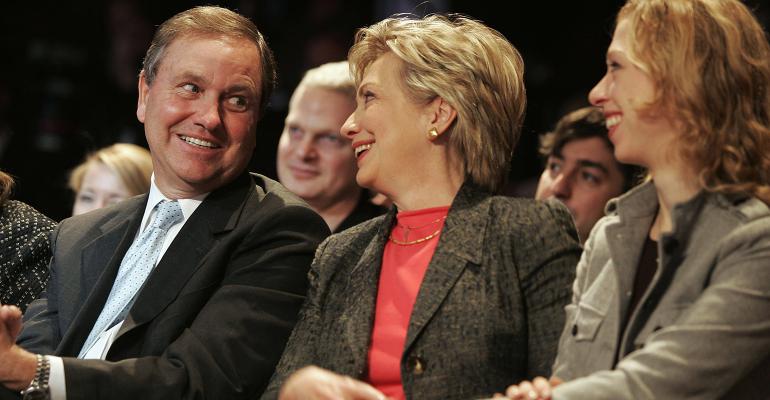 <p>Wal-Mart CEO Lee Scott, Hillary Rodham Clinton and her daughter Chelsea Clinton sit in the audience for the final day of the Clinton Global Initiative annual meeting on Sept. 22, 2006. A large array of notables in the worlds of politics, human rights and philanthropy gathered in New York for three days of fundraising pledges and seminars on global issues. (Photo by Chris Hondros/Getty Images)</p>
Top Retailers>Walmart

The speech excerpts were included as an attachment in an email sent last January by Tony Carrk, research director at Hillary for America. The excerpts are a roundup of “speech flags” of potentially problematic policy positions apparently compiled by Harry Walker Agency, which represents celebrity speakers.

The 80-page document includes an entire section on Walmart. In multiple speeches cited in the document, Clinton describes serving on Walmart’s board in the 1980s. According to Clinton, she was invited to join the board by founder Sam Walton, whom she had met while working on education reform in Arkansas.

According to the leaked emails, Clinton recounted that Walton called her and said, “[M]y wife and daughter think we need a woman on the board and we can't think of anybody else besides you. I said, well, you have a way with words, Sam. That's really flattering. But, sure, I'll be on the board of Walmart.” Clinton said she was the only woman on Walmart’s board at that time.

In a speech at London Drug Toronto in November 2013, Clinton said while some may criticize Walmart, “those stores served a real purpose, not only for employment and low cost goods, but they did become a way for people who wanted to see what else was available to them, could go and look, products that never were readily available in a lot of those places before.”

Clinton also called Walton “a great patriot” and said he was “one of the first American business executives to really embrace technology” in remarks to investment research firm Sanford Bernstein in May 2013.

At the Board of Trade of Metropolitan Montreal’s Bell International Leaders series in March 2014, Clinton claimed credit for convincing Walton to raise corporate taxes to pay for education. “And Sam Walton kept shaking his head saying, I don't understand how you convinced me to do that. And I said, well, because you became convinced that you need an educated workforce, you need more people in the middle class to buy more of your goods.”

Clinton also said, at the Institute of Scrap Recycling Industries Convention in April 2014, that the Clinton Global Initiative had persuaded Walmart to launch a food waste recycling pilot at three Houston superstores. “It has proven to be such a success that the company decided to expand it to every store in the United States that sells groceries, and they're working on taking it global.”

Some of Clinton’s comments on Walmart were first reported by Politico’s Morning Agriculture newsletter.

The Clinton campaign did not comment on the authenticity of the documents, and has blamed Russian hackers for the leaked document. Spokesman Glen Caplin told Politico, “By dribbling these out every day WikiLeaks is proving they are nothing but a propaganda arm of the Kremlin with a political agenda doing [Vladimir] Putin's dirty work to help elect Donald Trump.”