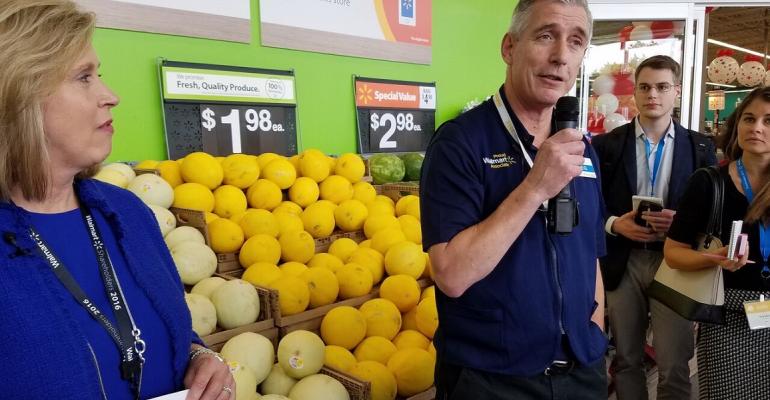 Wal-Mart Stores has debuted what officials called a "fresh and friendly" prototype for its Neighborhood Market concept — a modern and decidedly more sophisticated twist on the retailer's food-and-pharmacy stores that officials anticipate will better compete with both conventional food retailers and price-focused merchants.

The retailer said both new and existing stores would adopt elements of the prototype, which opened last week in Fayetteville, Ark.

New to the format is a vestibule entrance featuring bright green walls and a display of seasonal produce.

Inside, Walmart has employed its "fresh angle" layout, with a spacious produce section arranged on low-slung tables positioned at an angle so as to provide greater visibility to perimeter deli and prepared foods.

Around the perimeter, signs are rendered in whimsical, hand-drawn style on bright white backgrounds, giving the store a friendly, unassuming feel, Murphy noted. Product adjacencies have changed with a large cooler of craft beers and wines now facing the produce section.

Center store is bisected with a wide center aisle providing shoppers with a path through to pharmacy on the opposite side of the store, as well as a "power alley" where the store can showcase deals. Center store aisles include an inset top shelf for items that don't fit in allotted shelf space. This "top-stocking" practice reduces backroom inventory and is one of several new initiatives designed to keep store employees and managers on the sales floor to enhance service, said Greg Foran, Walmart's U.S. CEO.

That aspect is also supported by a new suite of applications deployed on employee handheld devices. Designed to resemble simple cell-phone apps, the programs provide visibility into real-time sales and inventory data, said Tom Ward, VP of central operations. The apps are rolling out chainwide,

"This is not a trial," Foran said of the store. "We're reasonably happy with how this looks. But we're not going to change all our stores next week. It will be progressively introduced."

The store also indicates the company is now more willing to pay for the best real estate sites it can find, Foran said.

"So the way we think about sites is that we're where the customer wants to go. We're on the right side if the road and have the right visibility. If we have to pay a few more dollars for that, I'm OK with that. Because at the end of the day this is about leverage. Get your sales up, and you can afford to do things."