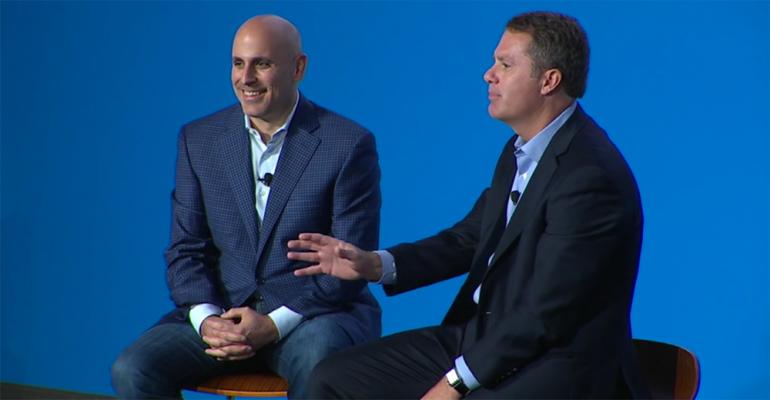 The new head of Wal-Mart Stores' e-commerce business was introduced this week as a kind of Cyber Sam Walton, whose innovative approach to the online shopping trip will pioneer what CEO Doug McMillon termed "EDLP 2.0."

Marc Lore, who was named CEO of e-commerce at Walmart when the retailer acquired his Jet.com business for $3.3 billion less than a month ago, was short on the specifics of how he would transform Walmart's considerable but relatively lagging e-commerce business, but reiterated that the big retailer and its entrepreneurial new e-commerce leader shared a vision for success in retailing by attacking its inherent costs and passing them along to consumers. He also expressed confidence that the combination of Walmart's existing assets and Jet's virtual expertise could accelerate the vision of "seamless" shopping long pursued by his new employer.

"I couldn't be more excited when I look around and see the vast assets that are at our disposal here," Lore said during remarks at Walmart's investor meeting Thursday in Bentonville, Ark. "The foundation has been laid in terms of the warehouse network. I think the decision to build five mega centers was the right one. There's incredible automation there and they're just starting to come up online, and so it's sort of like the perfect time to really accelerate the business. The sourcing capabilities relative to what we experience is not even close."

Lore said Jet.com was founded behind the notion that e-commerce marketplaces, such as Amazon, were "incredibly inefficient," because they are built so as to award sales to the lowest price item provider, regardless of the costs associated with fulfilling the order. Jet.com's breakthrough, he said, was to craft a technology that not only takes fulfillment costs into the equation, but builds baskets by making the process transparent to shoppers, showing them what the savings are of buying one product over another, and by also employing other incentives to save such as options on payment methods, shipping times or returns.

"So for example, if you have two things in your shopping cart, let's say, a bag of dog food and a dog bowl, and now you search for a dog leash, we'll, in less than a second, calculate the marginal cost to ship each one of those leashes in relation to what's in your shopping cart, knowing where you live in relation to all known inventory pools," he explained. "So some leashes, obviously, we'll bill to ship together. And in that case, the marginal cost to ship will be almost nothing, or it may ship completely separately and it might be $5. The idea is to try and encourage consumers to buy things that will ship together from a location in close proximity to where they live."

These basket economic ideals, which McMillon termed "EDLP 2.0" could transform not only Walmart's existing e-commerce business, but its stores and culture, McMillon told analysts. "EDLP still has a place in life that lowers cost and is very powerful," he said, "And on top of that, if you can let customers play a role in this process — a legitimate, authentic, transparent opportunity for customers to participate in a way that helps lower systems cost and you give that money back to them — you can win. We did that before and we want to go do it again."

Specific details on how it will all play out may have to wait.

Lore for example said fresh food would be "a critical part of the strategy going forward," but, like Walmart, it was still experimenting on the best way to conquer the last mile there. Walmart has focused on store grocery pickup, but is also testing its own delivery fleet as well as using Uber and Lyft for delivery in some markets. Jet ships food from a centralized distribution center. "One thing is for sure, we're going to be really focused on winning in fresh and consumables over the next couple of years," Lore said. "And we're just not quite sure what the final best way to do it is, but we're experimenting."