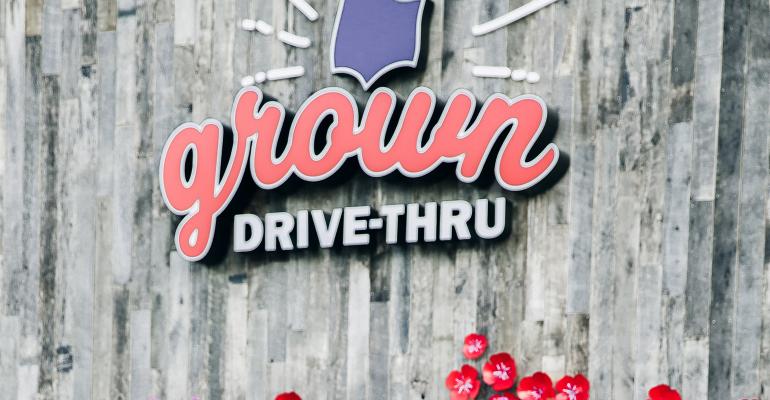 In a symbiotic exchange of credibility and visibility, an all-organic quick service restaurant is opening inside a new Walmart Supercenter near Orlando.

The restaurant, known as Grown, is the first USDA Certified Organic fast food restaurant on the East Coast, and was founded in Miami last year by Shannon Allen and her husband Ray Allen (pictured below), the retired NBA All-Star. They describe the concept as marrying “the quality of farm-to-fork cuisine with the convenience of fast food dining.” Walmart officials describe it as a snug fit for the Lake Nona Walmart Supercenter, which opened Wednesday (the restaurant was still under construction and is expected to open officially next month). The Lake Nona store expands on several of the features that were debuted at the retailer’s Rogers, Ark., prototype in 2015, including its layout, food assortment, and grocery pickup, and is only the second store in the chain after Rogers to include a mobile-enabled Scan & Go feature allowing shoppers to shop and check out using their mobile phones.

The company pursued Grown as a means of highlighting a local Florida offering, while aligning with a focus on innovation and fresh food elsewhere in the store,

Phillip Keene, a Walmart spokesman, said in an interview.

“Lake Nona is an affluent area and a lot of the development around the area is health and wellness focused and this store is also in that vein,” Keene said. “The people who shop that store want those kinds of offerings. They want organic. They want the look and feel that we have. We’re a store of the community, so to speak. When we were looking for a restaurant to partner with we thought, ‘What can we do to be different, and that can fit with what were trying to do here?’”

Grown owner Shannon Allen described the pairing as “meaningful and exciting,” saying locating at Walmart would provide an opportunity to highlight its mission of “reinventing fast food” before a massive audience.

“If a company of Walmart’s size and impact is saying ‘our focus is moving towards organic grocery’ that should let the world know it’s time for a concept like ours,” Allen said.

She added that she intends to deepen the relationship with Walmart, noting the company is looking into sourcing ingredients from a neighboring Sam’s Club as means of keeping prices within the range of a Walmart audience.

“I really don’t want this to be a concept that is only available for certain families in higher income bracket,” Allen said. “Delicious, organic food should not be a luxury. It should be the right of every family, whether you live in Hialeah or Liberty City or Coral Gables or North Miami Beach.”

The concept serves breakfast, soups, salads, sandwiches and wraps along with smoothies and cold-pressed juices. The Walmart location, which is expected to open at the store next month, will be Grown’s fourth overall site and its first in the Orlando market. It also has a location in Miami and two outposts in the Miami Dolphins’ Hard Rock Stadium: a concession window as well as full-scale restaurant on the club level.

The 1,700-square-foot Walmart Grown location, adjacent to the produce department near the store entrance, will seat 60.