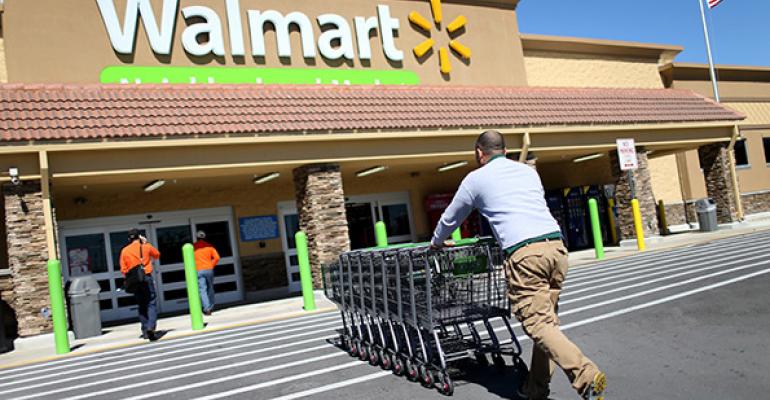 Higher expenses for investments in e-commerce and the workforce triggered a 15.1% decline in second quarter earnings for Wal-Mart Stores, the retailer said Tuesday.

The results, which were lower than the company or analysts had anticipated, accompanied a lower forecast for earnings for the remainder of the fiscal year.

Revenues for the period, which ended July 31, totaled $120.2 billion, down by 0.1% from the same period a year ago, but up by 4.8% on a constant currency basis. U.S. comparable-store sales improved by 1.5%, driven by a 1.3% gain in store traffic. Comps in Neighborhood Market stores were up by 7.3% in the quarter. Sales margins declined as a result of reduced pharmacy reimbursements and higher shrink. Operating income was down by 10% (U.S. down 8.2%) and net earnings declined 15.1% to $3.48 billion.

Walmart is digesting the financial hit of providing raises to more than half a million U.S. workers earlier this year and adding 8,000 new jobs in U.S. stores. It also continued to invest heavily in e-commerce, but noted that weakness in international markets would likely produce lower sales growth in that segment than initially anticipated.

“Winning in the future requires change. Change, in this case, requires investment, and investment pressures short-term earnings,” CEO Doug McMillon said in prepared remarks. “Our strategy is designed to create robust and sustainable growth that will deliver returns to shareholders. We obviously want to do that in the short- and long-term — and it all starts by winning with customers.”

Greg Foran, Walmart’s U.S. CEO, highlighted initiatives that he said were improving customer experience in stores, including faster checkout and cleaner and better-maintained stores. Those initiatives will continue to pressure the bottom line, however. The company is also simplifying work processes, including a rollout of improved handheld devices that will help associates and managers to remain on the sales floor during peak hours, Foran said.

The company is also changing how it deals with suppliers, Foran added, urging suppliers to plow marketing expenses into lower everyday prices, and collecting allowances from suppliers for products being places in new stores and warehouses. These changes are resulting in fewer ad flyers — Walmart has run four this year vs. 20 last year, Foran noted — while shifting some display decisions to local stores.

In grocery, consumables had positive comps during the quarter, but declining inflation in food led to a 60-basis point decline in the category, Foran said.

Shrink was higher than expected. “We are reviewing the end-to-end inventory management process with a special focus on shrinkage and working to close gaps,” Foran said. “Investments are being made in training programs for store and asset protection associates as well as investments in staffing in high shrink areas of the store. But it will take time to see results, so this will impact us versus plan for the rest of the year.”

Walmart adjusted its earnings outlook downward and now expects earnings-per-share for the fiscal year to to be in a range of $4.40 to $4.70, vs. earlier expectations of $4.70 to $5.05.