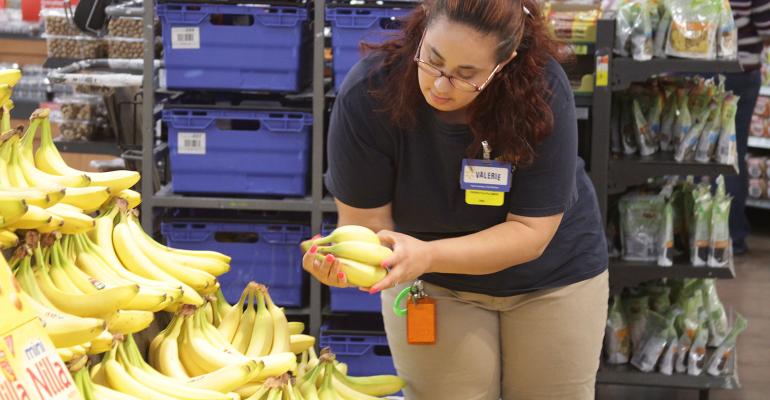 Wal-Mart Stores on Tuesday said its performance in the U.S. in the fiscal fourth quarter was slightly better than expected, as positive comparable-stores sales in all formats and strong growth in e-commerce helped to overcome continued deflation in food.

For the quarter, which ended Jan. 31, U.S. non-fuel comps improved by 1.8%, driven by a 1.4% increase in store traffic and a 0.4% gain in average ticket. Comps at Neighborhood Market stores improved by 5.3% in the period, while non-fuel comps at Sam’s Club improved by 2.4%. E-commerce contributed approximately 0.4% to Walmart’s U.S. comps, and 80 basis points to the Sam’s comp figure.

U.S. gross margins in the period declined by 8 basis points, as price investments and post-holiday markdowns more than offset procurement savings and lower logistic costs, the company said. Net sales of $83.7 billion in the U.S. improved by 2.8%, while operating income of $5 billion decreased by 2.5%. E-commerce sales increased by 29% in the quarter.

International sales decreased by 5% to $31 billion in the quarter, but gained by 3% when adjusted for currency fluctuations.

Total company earnings per share of $1.22 fell within expected guidance of $1.18 to $1.33. Excluding adjustments for severance costs and canceled real estate deals, EPS would have totaled $1.30, the company said.

“We had a very solid fourth quarter with U.S. comp sales growth of 1.8% and U.S. e-commerce [gross merchandise volume] growth of 36%,” Doug McMillon, Walmart’s CEO, said in a statement. “Our international business is consistently delivering solid sales growth in constant currency, and Sam's Club posted its best comp sales growth of the year.”

In recorded remarks McMillon praised ongoing training and technology initiatives providing lower inventories and improved shopping experiences in U.S. stores. Inventory was down by 7% on a comp-store basis in the quarter. “In fact, I recently visited a store in Morrisville, N.C. where they had reduced inventory so significantly that the backroom was empty enough for them to build a training academy there,” McMillon said.

McMillon also cited new Supercenters in Florida and Texas that include features like scan-and-go, touch-screens where customers can access more items on Walmart.com, virtual item displays, and an integrated health and wellness section. “We’ve got quite a few experiments going on in the company these days and we’re learning at a faster rate.”