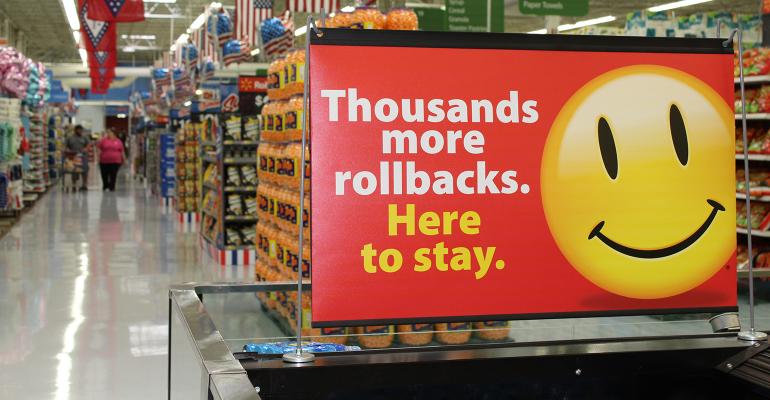 Wal-Mart Stores has confirmed that it has expanded a program of everyday price investments that began in select markets in June, a move that could accelerate what appears to be an industrywide trend toward heightening price competition as deflationary conditions continue.

A Walmart spokesman told SN Monday that the Bentonville, Ark.-based company expanded its Rollback program Aug. 1 but declined to identify a precise number of stores or the markets where the price investments took place. Sources, however, indicate the program has expanded at some 300 stores in addition to around 500 stores launched in June.

"We're focused on low prices, up front, on the shelf," John Forrest Ales, a Walmart spokesman, said in an interview. He said the Rollbacks — or extended price discounts — were going "item by item and store by store," and were "pretty significant," including lower everyday prices on branded and private label goods as well as fresh produce.

The return of the Rollback program, which was scaled back as Walmart devoted investment to store conditions, wage increases and e-commerce initiatives in recent years, has been accompanied by a discontinuation of Walmart's "Ad Match" program in the stores where lower prices have been implemented, providing further indication that Walmart intends to rely less on its rivals to support a pricing message. The "Savings Catcher," an app-based loyalty program that automatically refunds local price differences for customers who scan receipts, is continuing, the spokesman said. Walmart is also continuing to support online price-matching programs.

In a recent research note, Scott Mushkin, an analyst for Wolfe Research, said recent pricing surveys in North Carolina indicated the average Rollback item saw prices drop by around 17%, and that Walmart's basket prices overall were down by 6% in North Carolina vs. a similar basket in Atlanta. In North Carolina, Mushkin wrote, "The lower prices on branded consumables like Chunky Soup and Hungry Man frozen dinners (products that have seen volume challenges) suggest that Wal-Mart, at least at this stage, understands it will need to lower prices on goods where the volume payback is likely to be muted in order to re-establish its historical price advantage. Wal-Mart was also clearly focused on lower fresh produce prices, according to our research. The aim here is to drive traffic to the stores."

Mushkin noted Walmart is not alone in making aggressive price movements in recent weeks. A recent pricing survey in Chicago indicates Albertsons Cos.' Jewel-Osco banner had lowered basket prices by 13.7% since June. The price of an average comparable basket across all retailers in the Chicago market dropped by 3.4% over the same period.

Jewel's pricing action cut its premium to Walmart from more than 20% on average to 6.4%, Mushkin added.

"Jewel was incredibly promotional and we witnessed some the lowest prices we have ever seen on the shelf," Mushkin wrote. "Indeed, searching our pricing survey database, we believe that some products at Jewel were setting record low prices and by a lot," including offers of a 24-ounce jar of Ragu spaghetti sauce for $1.15 and Jif peanut butter prices at $1.49 for a 16-ounce jar.

Walmart's pricing actions represent the beginning of a planned investment of "billions of dollars over several years" Greg Foran, the retailer's US CEO, said in June.

But stubborn price deflation, and rapid store expansion elsewhere is prompting some retailers to go hard after volume, Mushkin said.

"The food-at-home retailing space is quickly descending into competitive chaos, in our opinion," he wrote. "With now two major competitors offering deep discounts, we believe it is only a matter of time before Kroger moves to defend itself. As such, it now seems the industry is entering a hyper-competitive phase that is without precedent during a time when the unemployment rate has been this low."

An earlier version of this story indicated sources reporting that the new pricing programs were launched in Oklahoma and in Nashville. A Walmart spokesman however said those markets were still accepting in-person Ad Matches.