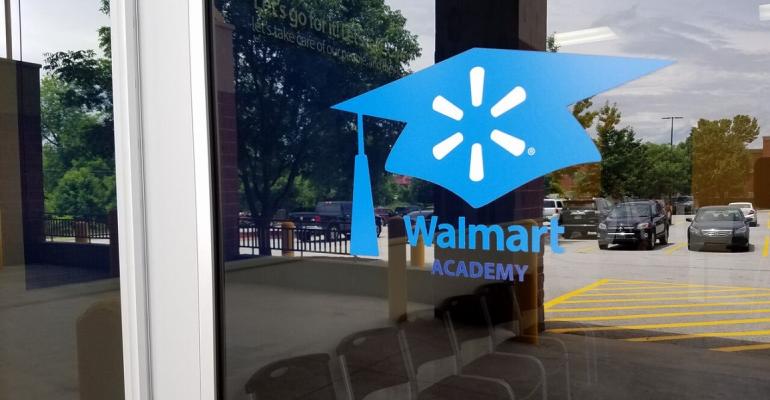 The programs are part of the retailer's multimillion investment in wages and training announced a year ago and are intended to do a better job of cultivating talent so as to reduce turnover, improve service and execution in stores, and ultimately, drive better productivity.

"We see training as an investment, not a cost, and it's essential to the development of our business," Michelle Knight, vice president of talent development, Walmart U.S., said. "So the skills of associates are the most important element of our business. And the more equipped they are at the job, the easier it is for them to obtain a high level of productivity, which is really what we're driving for.

Workers enjoy the training programs, she added. "They say it's like playing Candy Crush," Pomeroy told SN. She said it's still too early to determine what effect Pathways has had on reducing turnover but said she was confident it would have "significant" effects over time.

"Walmart has more than 900,000 associates in entry level jobs -- our cashiers, our stockers, our unloaders and our greeters," Pomeroy said. "That's a great fuel tank to fuel our future but it also means we need to think about how we can provide clear career paths for associates, many of who might be working for us part-time and are coming to us for their first job in the working world."

The executives spoke at the site of the first "Walmart Academy" -- a 3,000-square-foot learning facility adjacent to a Walmart Supercenter in Fayetteville, Ark.

Tom Ward, VP of central operations for Walmart U.S., said the company had plans to open 90 such facilities this year and 200 by next June, each drawing students -- mostly department managers and other advanced Walmart employees -- from an average of 26 regional stores participating in a two-week program of classroom learning and training at the adjacent store.

Classroom training is done on tablets, allowing students to save and upload notes for future reference, and Walmart to quickly adjust training as needed.

Walmart has also endeavored to support workers through additional education programs including new programs to help workers obtain high school diplomas and college credits at no cost, and learn languages through Rosetta Stone.