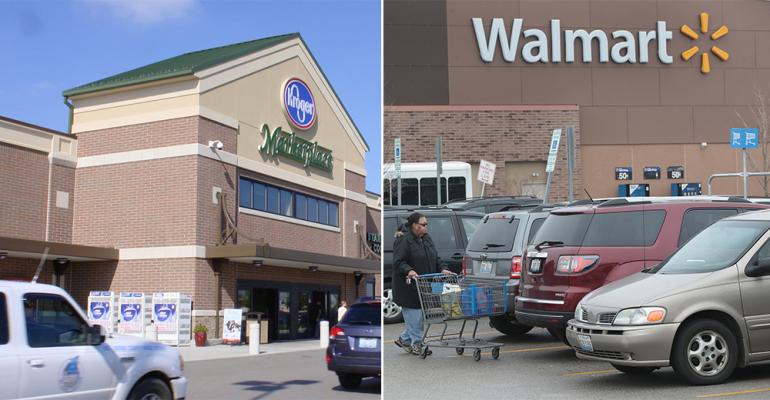 Rollbacks in Kentucky, Indiana, Michigan could pressure costs for Walmart and competitors

Wal-Mart Stores has advanced its price-cutting battlefront deep into Kroger country in a move likely to draw competitive responses and associated profit pressure in places like Indiana, Kentucky and Michigan, an analyst said.

At least some Walmart stores in those three states have lowered prices to the same levels — and on many of the same items — as Walmart had in North Carolina last summer, Wolfe Research analyst Scott Mushkin said in a research note this week. Walmart, Bentonville, Ark., acknowledged then it had kicked off a multi-year, multi-billion dollar investment in more competitive prices, but did not provide details on where it was cutting prices, or other specifics of the initiative. A spokeswoman for the company was not immediately available for comment Wednesday.

Mushkin said a sampling of prices on a basket of goods at six Walmart stores in Michigan (Battle Creek, Livonia, Grand Rapids), Indiana (Evansville) and Kentucky (Louisville, Lexington) tested this month were slightly lower than the same items sampled in North Carolina in July.

With additional input from local sources, Mushkin said “we have concluded that Walmart’s efforts are fairly broad-based and likely mark the second phase of reduction activity which started in earnest over the summer of 2016.”

As in North Carolina, the Midwest price cuts strike in the heart of key territory for Kroger Co., and are likely to draw a competitive response if Kroger is to maintain the mid-single-digit price gap between the big competitors, Mushkin said. That response could be an expensive one, he added, estimating that Wolfe models Kroger spending an incremental $450 million on lower prices this year to stay in range with Walmart.

A Kroger spokesman declined comment Wednesday, citing a quiet period ahead of earnings. Officials have previously said the company invests in price on a constant basis but emphasized price was but one element of its overall strategy.

A more competitive Midwest market is likely to be costly to Walmart as well, Mushkin added, citing a downward trajectory in its earnings. Dollar General, which also followed Walmart’s Carolina pricing actions, SpartanNash and Target could also feel pressure.